And, at last, here we go. Again, the rules are simple: It has to be already published (at the time I started writing this, anyway), and it has to be something that I neither wrote nor converted to DCC.  Recognizing that there is a lot of material for DCC out there, and there are a ton of adventures, this is my way of trying to "catch up" at least a little bit on reviewing them.

Again, none of this should be taken as a condemnation of any adventure published for the Dungeon Crawl Classics RPG. I own them all, and I have never felt "ripped off" for anything that I purchased. There are products that I absolutely love for this game that did not make the list.

Without further ado, here are my Top 5 picks for DCC adventures: 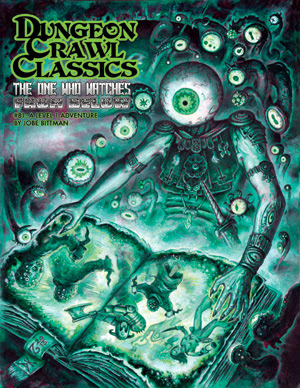 5. The One Who Watches From Below (Jobe Bittman, Goodman Games):  This was the winning entry from the 2012 Goodman Games "Mystery Map" competition, so it should be no surprise that it appears in the top five.  The adventure does an excellent job of not only engaging the PCs, but engaging the players as well, by making what occurs at the table important to what occurs in the fictive space.

I don't want to give anything away about this module, so I am going to rely on someone else's review, and just add "laser harpies".

This is a contest winner that well deserves to win. I don't know anything about the other entrants. Some of them may have been just as deserving.  It would be cool to someday see a compilation of the top 25 runners-up, which individual judges could then mine for ideas.

4. Frozen in Time (Michael Curtis, Goodman Games):  My favourite published Michael Curtis romp to date. What do you get when a bunch of primitive yokels investigate a.....hush, spoilers. But there is a robot on the cover and here's a review.  Of course, when we are talking the Top 5, it isn't simply a matter of theme, but of execution. With a heavy Gardner Fox influence, and nods to such rarities of the Appendix N corpus as Jack Williamson's Legion of Time, the adventure is a treat to read. There are also pop culture references for players to recognize as they play through it, making it an equal treat from the other side of the screen.  The adventure is exactly the right length for con games, and contains some options for judges who want to spin the concepts out further. The proportion of encounter areas and events that drive the adventure also works exceedingly well.

This is a fantastic adventure that belongs in everyone's collection. 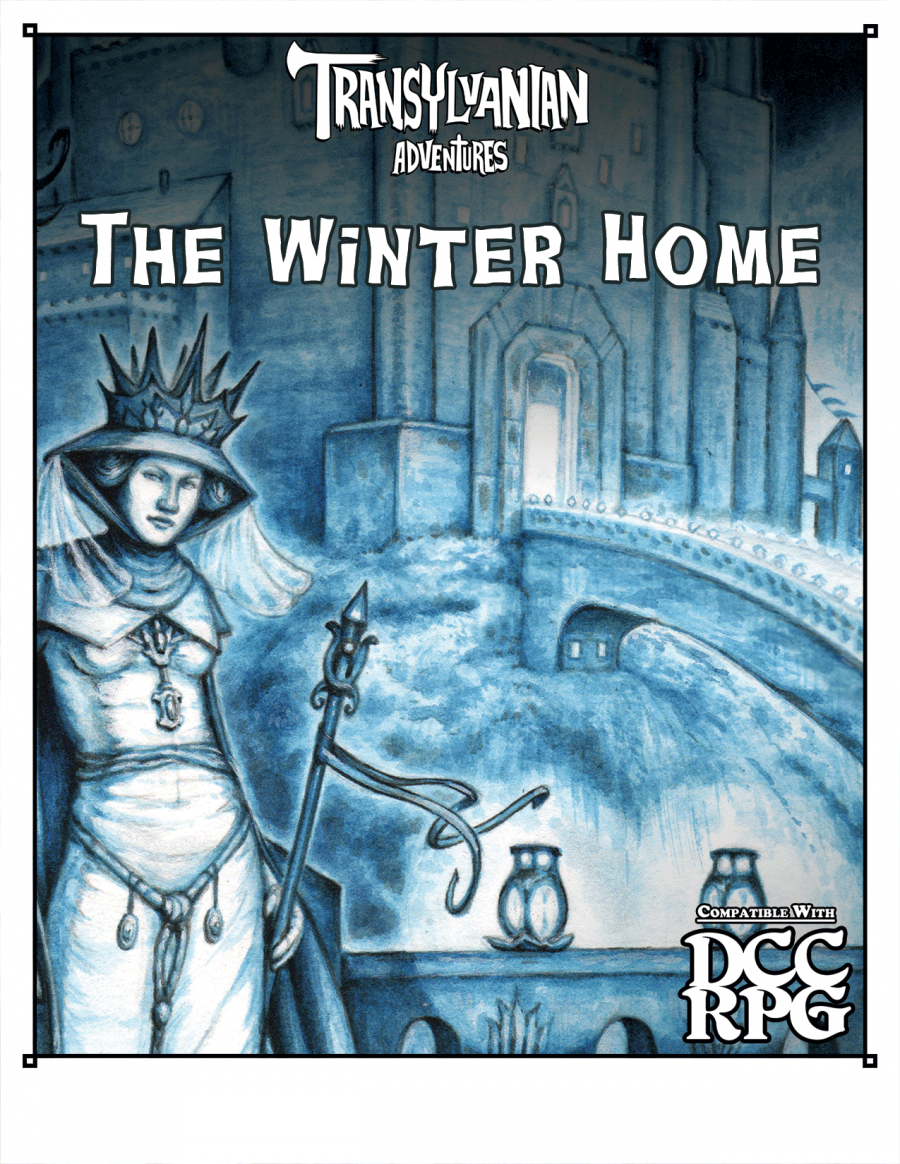 3. The Winter Home (S.A. Mathis, Land of Phantoms):  Originally published for Free RPG Day to promote the soon-to-be-released first Transylvanian Adventures volume, this adventure really delivers a dose of Hammer-style horror coupled with DCC-style ass-kicking. If this even sounds remotely like something you'd like, you should pick this up.

Even if it does not, you should pick this up to see how author Scott Mathis makes the relationships between the PCs as important as the monsters, and expresses a time limit in classic style.

2. The Jeweler that Dealt in Stardust (Harley Stroh, Goodman Games): Trust Goodman Games to not only develop fantastic adventures, but to put Class A material in even their free products. This amazing adventure initially appeared in the Goodman Games Free RPG Day 2012 offering, and later was reprinted in the Goodman Games Gen Con 2013 Program Book. This adventure is a heist in the noble tradition of REH's Rogues in the House and Fritz Leiber's Fafhrd and the Gray Mouser stories.  Things are not what they seem, of course, and author Harley Stroh is at his absolute creepiest with some of the encounters here. This adventure is great for mood, suspense, creepy opponents, and player choices that truly matter not only to the adventure's outcome, but even to the adventure's very beginning.  For my money, this one is even creepier than the ultra-creepy Bride of the Black Manse, and that is saying something! That it takes place in an urban setting is icing on the cake.

1. The Wizardarium of Calabraxis (Claytonian, Kill It With Fire):  You keep fish in an aquarium; you keep spell-slingers in a wizardarium. Here, in a handful of pages, is an adventure that you will want to run again and again. And, luckily, the material suggests that you should, merely by opening up new areas of Calabraxis' wizardarium, using many of the supplied monsters and supplementing them with new ones of your own creation. And the odds are very good that, even if another instalment comes out, your work will not be invalidated.

It's got creepy.  It's got funny.  It's got more than enough role-playing, problem-solving, and combat to make any group of players happy.  Depending upon player choices, the same encounter may be role-playing, problem-solving, or combat.  It has time travel, in a way that makes time travel fun, scary, and informative. It has psionics. It has ape-men. It has Vorbians. It has......well, enough spoilers, right?

Suffice it to say that The Wizardarium of Calabraxis is wrapped up in a neat package, giving you everything you need to run the adventure, and giving you lots of opportunities to make it your own.  The psionics system used is perfect for adding your own unique powers to a DCC game.

Look at it this way:  I come to DCC primarily as a writer and a game master.  All of these 15 Must-Have DCC adventures are ones that I would have been proud to have written.  This one, though, makes me wish I could go back in time, prevent myself from having read it, and find some way to a table where the author was running it.  It is that good.