He turned toward the arch — with appalling suddenness the seemingly solid flags splintered and gave way under his feet. Even as he fell he spread wide his arms and caught the edges of the aperture that gaped beneath him. The edges crumbled off under his clutching fingers. Down into utter blackness he shot, into black icy water that gripped him and whirled him away with breathless speed.
-          Robert E. Howard, Jewels of Gwahlur

Think about the best gaming sessions you’ve had. What are the things that remain strongest in your memory, the gaming stories that you tell repeatedly, or laugh about years after the events? The chances are that these stories revolve around dramatic reversals – the times where you thought you were on top just before the shit hit the fan….or you thought you were facing certain doom just before the dice tipped in your favour.

Grab just about any book on novel writing, and it will tell you the same thing – a chapter that begins with things look up should end with things taking a turn for the worse, and vice versa. Why? Because the sudden reversal is a common human experience, and dealing it speaks to the heart of our existential dilemma. No matter how good our lives may seem, there is always a reversal at the end.

Role-playing games can incorporate these dramatic reversals in several ways. Among them are:

(1) Intentional Shifts. When some precondition is achieved, the reversal occurs. For example, in 4th Edition, when a monster became “bloodied” its new condition might change its combat statistics. In Dungeon Crawl Classics, the Death Throes of a creature might create a new creature altogether – which might even be more dangerous than the creature it originated from! One example of this occurs in my own AL 1: Bone Hoard of the Dancing Horror, where defeating the Dancing Horror triggers the creation of the Hoardling.

Consider also adventures, such as Joseph Goodman’s The People of the Pit or Michael Curtis’ Frozen in Time, where achieving the win condition of the scenario triggers a reversal that the PCs may not survive. This is nothing new. First edition module A4, In the Dungeons of the Slave Lords, ends with the eruption of a volcano that could spell the end of tardy adventurers. I feel certain that many of my readers can easily call other examples to mind.

Other “fortunes shift” triggered events occur within the context of the adventure itself. There is an excellent example of this in the first instalment of the Savage Tide adventure path. Another great example of a sudden dramatic shift in fortunes (almost certainly) occurs in Death Frost Doom.

(2) Potential Shifts. In a non-linear scenario, the layout of an adventure can include elements which can provide great weal or woe, but which only become active on the basis of the players’ choices.  A trap, a monster, or a hidden treasure may all make the difference between success and failure.  A series of the same can create a series of dramatic shifts, tracking the PC’s fortunes both fair and foul.

You will occasionally hear some wag claim that the original Basic and Advanced Dungeons & Dragons modules were intended to allow every possible XP to be gained. In other words, every monster was to be fought, and every treasure was to be gained. This is regardless of what the authors themselves said:

[I]t is quite conceivable that they could totally miss seeing a treasure which is hidden or concealed. In fact, any good dungeon will have undiscovered treasures in areas that have been explored by the players, simply because it is impossible to expect that they will find every one of them.
-          Mike Carr, In Search of the Unknown

These same wags will often express perplexity at the deviousness with which certain items of treasure are hidden: How is it even possible for the PCs to find them?

The answer, of course, is that the PC’s weren’t meant to find them, and they weren’t not meant to find them. The game – and the dramatic reversals in the game – require that the PCs either find them or do not based upon the game’s actual events. These games were not intended to be a linear “adventure path”! To set up this sort of sudden dramatic reversal, the Game Master merely need to seed his adventures with all sorts of potential boons and mayhem. Then sit back and see which the players trigger.

Panic had momentarily touched his soul at the shock of that unexpected reverberation, and the red rage of the primitive that is wakened by threat of peril, always lurked close to the surface of the Cimmerian.
-          Robert E. Howard, Jewels of Gwahlur

Note that this doesn’t always have to be an item. Dungeon Crawl Classics also does this with class abilities – you can call upon your god/patron, but then your god/patron gets to call upon you. Michael Curtis’ adventure, The Chained Coffin, includes a literal Devil’s bargain

(4) Random Results. You want to know why players pay attention to critical hits and fumbles? Because the results matter. And, unlike all of the other forms of dramatic reversals described above, this isn’t the GM playing you. This really is just pure, unadulterated luck, good or bad. Regardless of the consequences, there is a lot riding on those dice.

Through the use of dice, random tables, and similar means, a game can bring real sudden change into play. Fortunes can be made and lost. That it is not the GM, but the impersonal dice, doing this to you is a good thing.

There is a scene in Raiders of the Lost Ark, where Indiana Jones faces yet another thug. This thug has a sword, and it looks like another tough fight is about to begin. Then Indy draws and shoots him down. Sudden dramatic reversal right there, and one of the most memorable scenes in the movie.

The thing is, it wasn’t scripted that way. There was supposed to be a big fight. The story goes, Harrison Ford was tired from filming all day, so he drew and fired as a joke. The other actor went along with the joke. The director thought that it was brilliant, and, rather than try to enforce the lavish fight he had imagined, went with it.

Consider this in game terms. In effect, Indiana Jones gets a critical hit that ends a “tough” encounter immediately. Imagine what would happen, though, it Steven Spielberg decided to “fudge” that result, and demanded that the complex fight scene he had imagined would take place regardless. That might have been a fantastic fight scene. Maybe. Maybe not. Either way, we would have lost one of the scenes we remember most from the movie.

And that is the point. Spielberg himself experienced a dramatic reversal from his own expectations, and he was wise enough to realize that this was a good thing.

May we all be so wise! 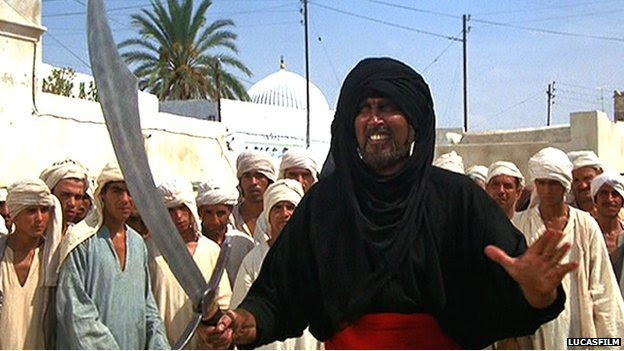 Posted by ravencrowking at 16:38 2 comments:

If you received this year's Mathom, please ignore the last paragraph on Page 1. It snuck in from last year's offering!
Posted by ravencrowking at 08:45 No comments:

Midnight tonight is the last chance to obtain this sparkling, no-art beauty. Here is a sample: 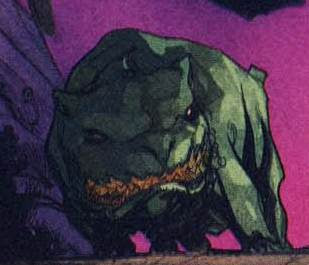 In response to her call I obtained my first sight of a new Martian wonder. It waddled in on its ten short legs, and squatted down before the girl like an obedient puppy. The thing was about the size of a Shetland pony, but its head bore a slight resemblance to that of a frog, except that the jaws were equipped with three rows of long, sharp tusks.
- Edgar Rice Burroughs, A Princess of Mars

Calots are fierce, intelligent animals that are the fastest living things on Barsoom. Despite the fact that they are noted for their loyalty, and used as “watchdogs” by Barsoomians, to be called a calot is a deadly insult, and wild calots can pose a serious threat to travellers.

A calot can clamp down on a successful bite attack, doing 1d5 damage each round until it is shaken free (opposed Strength vs. a +3 bonus; one free attempt per round). This hampers the bitten victim so that it takes a –1d penalty on the dice chain to Initiative and attack rolls, but if the opponent is larger than the calot, it can automatically inflict 1 point of damage each round by spending an Action Die to do so.

Because of their fierce loyalty, a calot gains a +2 bonus to attack rolls, and a +3 bonus to damage, when defending a creature it has bonded with.

Like the preview? Find out how to get the Mathom here!

Like the blog? I could use your help here!
Posted by ravencrowking at 12:10 No comments:

The Mathom is done. It contains a bunch of stats for Barsoomian creatures, as well as the lunar creatures from The Revelation of Mulmo, and an extra monster or two (which are OGC).

Shiny, Chrome, and Ready for Valhalla!
Posted by ravencrowking at 16:51 No comments: