Titles I Wrote (That I Think are Worth Running) 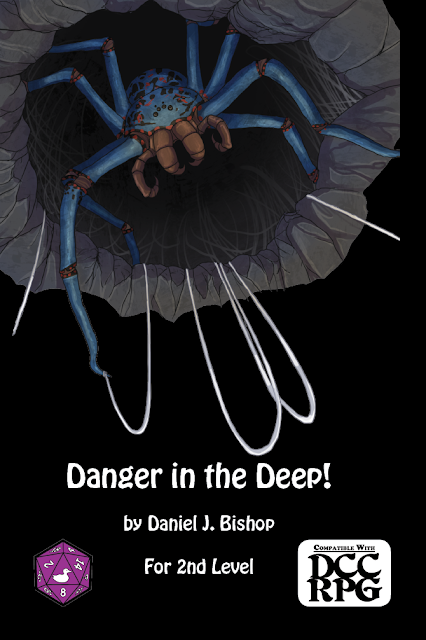 Jonathan Davis wrote "Hey Daniel, quick question. Of the DCC adventure modules that you've created, could you rattle off your favorite 5-10? If you have time to elaborate you could go into specifics as to why you are making those selections. I know you've posted this around here somewhere but I can't find the exact post. I've got a few dollars burning a hole in my pocket. You've got quite a catalogue and with all the zines and podcast supplements out there, some of this material can be awful obscure!"

Overall, I try to avoid doing things like that because I tend to think that others can judge my work better than I can. The Endzeitgeist reviews are a good place to start. You would probably get a different 10 adventures listed on another day.

Without further ado, then, and in no particular order:

1. Stars in the Darkness

Published by Purple Duck Games, this adventure looks at the ancestors of the elves, blurs the line between what is real and what is not, and deals with cosmic themes. A lot of the adventure was based off of what the map (Kristian Richards) suggested to me. The Mormurg in this adventure are partially based off of the morlocks in H.G. Wells' The Time Machine. There are nods to Margaret St. Clair, Michael Moorcock, Robert E. Howard, and H. Rider Haggard if you can find them. This adventure makes use of the Luck mechanic from the core rules as a motivating force, tying the PCs into the cosmic forces of the stars. Temporary Luck is used as well, which I believe is a clear precursor to the (far superior) Fleeting Luck rules used in DCC Lankhmar.

The creepy setting and creatures in this adventure has been mentioned on the Sanctum Secorum podcast several times. The adventure introduced demi-patrons, which are independently expanded by Paul Wolfe in the expanded edition of Angels, Daemons, & Beings Between. When this adventure came out, there were not many crossovers using fantasy and science fiction material in Dungeon Crawl Classics, but Silent Nightfall could have been written for Mutant Crawl Classics or the upcoming DCC Empire of the East. The direct inspirations were Fred Saberhagen and Sterling Lanier. Within the adventure you get a simply mutation system, sample creatures, and an organization dedicated to the collection and use of ancient technological artifacts. But it is the Shaft Crawler that really makes me happy with this one....a creature designed to make over-reliance on spells as dangerous as the game as the foundational literature implies it is!

3. Goblins of the Faerie Woods

A funnel with two five-level goblin classes, this adventure just has a lot of weird fairy tale fun bits in it. It also has a lot of encounters where, even if you do end up fighting, you will probably do a fair bit of role-playing first. The goblin classes are rewrites of bits I wrote for goblins when I was going to do my own fantasy heartbreaker, and I think that they are flavorful enough to merit play. The adventure rewrites goblins into a more folkloric, less "weak, dumb humanoid" creature.

Goblins of the Faerie Woods is also useful as an adjunct to the FT Series of adventures (Prince Charming, Reanimator, etc.), both as the means to introduce new characters and for its treatment of the Faerie Woods and its denizens. Influences move away from standard Appendix N fare for George MacDonald, Alan Garner, and Christina Rossetti as primary influences.

This is a Crawljammer adventure published in two parts: The Weird Worm-Ways of Saturn and The Vault of Ash. It is an adventure heavily influenced by the work of Clark Ashton Smith, with a few nods to other authors, such as Edgar Rice Burroughs and Jack Vance, thrown in for good measure. The first part is predominately setup and hexcrawl, while the second part is a dungeon delve where Tsathoggua and the Worm God both make appearances.

This one gets my vote for a few reasons. One is the constraints that the Crawljammer setting puts on Saturn - normally ships can't land there, it is inhabited by primitive ape men, and there are giant worms (clearly a nod to Beetlejuice). There are also few direct Appendix N references to Saturn that I could find, apart from the redoubtable Clark Ashton Smith's mentioning that the worship of Tsathoggua began there...and H.P. Lovecraft's alien cats from Saturn.

Each volume includes a new class, as well as an adventure that is somewhat epic in scope. The setup allows the judge to introduce a long-term villain that the PCs are unlikely to be able to sort immediately. Saturn is given a worm-heavy, but not worm-exclusive ecology. There is a time restraint. There are strange gravitational effects. There are several ape man villages to encounter, and not necessarily as foes.

I recommend that you actually read the DCC Trove of Treasures entry on this one. That the adventure works, and is epic in scope, makes me somewhat sad that it doesn't get more table play. Or, at least, that I don't hear about it.

In addition to the obvious Robert E. Howard and Edgar Rice Burroughs influences, there is a definite nod in here to Andre Norton. The planet Madkeen was intended to be something like ERB's Amtor (Venus) in that literally anything could be there beyond the areas in the initial adventure. The idea that the PCs could gain love interests, and then have to leave them behind to return to their own world (in order to save both worlds) is a definite nod to the ending of A Princess of Mars.

I would love to see more adventures set on Madkeen.

6. Icon of the Blood Goddess

One of two adventures I wrote for In the Prison of the Squid Sorcerer, this adventure is designed to be played in parts, over the course of (and between) several other adventures. Often, players will want to resolve things as they arise, and are unwilling to simply let sleeping threats lie. Well, in this case, they don't have that option. The escalation moves from creepy to threatening, and the final encounter makes use of the Magic Here and Magic There section from the core rulebook, as well as being something that I am deeply happy with. 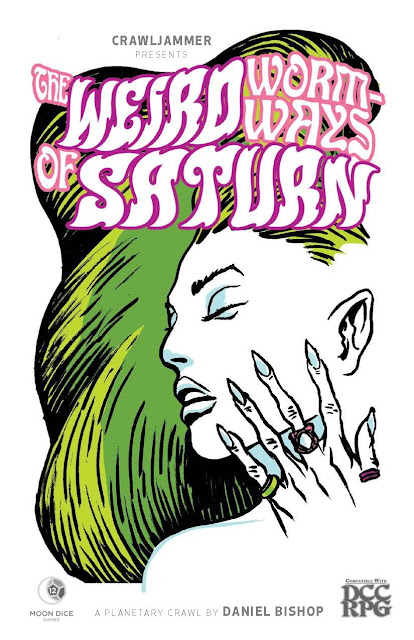 Published by Purple Duck Games, this adventure gives you a cave experience that I enjoyed writing, and which I enjoy running. There are also intentional tie-ins to other adventures that I have written: The Crimson Void and The Tribe of Ogg and the Gift of Suss. The adventure supplies you with plenty of things to talk to, plenty of things to fight, and, I hope, plenty of other dangers.

The original title was going to be Cold Stone and Running Water, which refer to two magic items that can be found in the caves, as well as the nature of the caves themselves. There is a full patron write-up for Gul, the Old Darkness. Also, snailtaur potion masters!

Originally published in the DCC RPG/Xcrawl Free RPG Day 2013 book, and republished in Chaos Rising, this is the first adventure I wrote for Goodman Games. I really love the cold passages with their fossil ammonites and piscine phantoms - those were the first images that the adventure was built upon, and they hold my imagination as much now as they did when I was writing this one.

There are a lot of Appendix N references (which are described in the links above), but what really makes the adventure work are the choices that the PCs are confronted with. Will they trust Ivrian the Unkind? Will they steal her body? How will they react to Nightraker? Which exit will they choose? Will they take pity on the bound demon?

Oh, and at level 1 you are going to hit 0 hit points at least once. How about a treasure that keeps you from losing a stat point when you do?

Largely written as a tribute to the late, great Ray Harryhausen, this can be found in D.A.M.N. #1 Winter 2017. Although this can be used as a straight adventure, it was intended as an adventure setting....a place the judge could slot other adventures into while the PCs explored. As far as I know, this is the first product like that for Dungeon Crawl Classics. There are a lot of set pieces which, while requiring the judge to develop them, should play out well for characters from low to mid-high levels. I'd love to hear how anyone used this material.

10. The Tribe of Ogg and the Gift of Suss


It's a free caveman funnel that riffs on Edgar Rice Burroughs, Manly Wade Welman, Andre Norton, H.P. Lovecraft, and Robert E. Howard. What's not to like? How about I throw in a new class? How about a Mercurial Magic table for stone age characters? 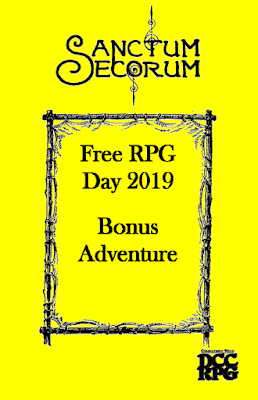 Thanks to the good folks at the Sanctum Secorum podcast, I will have some additional materials to give away for people who play in my games at the Sword & Board this Saturday!

This is, of course, in addition to the regular Road Crew swag that Goodman Games has so kindly provided!

For more information on my events, see this post. The Facebook event listing is here. Here's hoping to see you there! 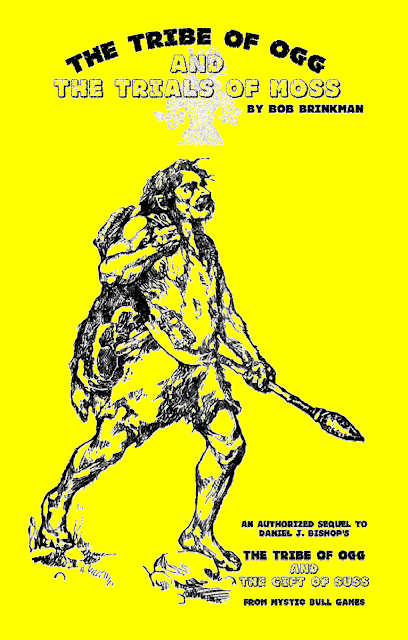 Posted by ravencrowking at 13:23 6 comments: