U is for Upsetting the Cart 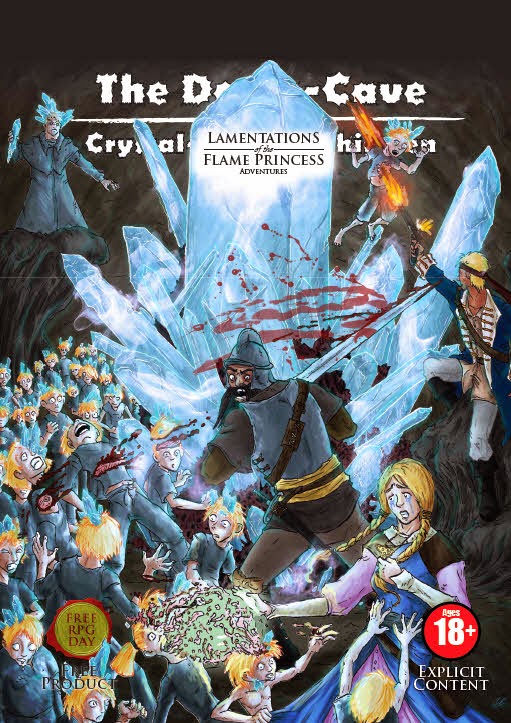 If you were able to get out for Free Role-Playing Game Day last Saturday, I hope that you managed to pick up James Raggi's offering for Lamentations of the Flame Princess. In its introduction, James talks about wanting adventures that shake up the status quo, and why would you want an adventure that left the world unchanged anyway? I am paraphrasing, of course, but it is a good essay, and definitely worth reading.

It leads me to one of my current projects, the Faerie Tales From Unlit Shores series, by Purple Duck Games. The FT series is a group of linked adventures that take place within the same overarching milieu. Each of the FT modules is targeted at a specific character level, from 0 to 6, with the module number indicating what level it is targeted at. thus, FT 0 is a 0-level funnel, FT 1 is designed for 1st level characters, and so on.

This is sort of like an "Adventure Path", I suppose, except that there is no mandate to stay on the path. Using just the first two adventures in the series, there is an option in FT 0 for the PCs to skedaddle and go live as outlaws in the forest. What does the poor judge do if this happens?

One option is to pick up FT 1, and simply not include the encounters that specifically relate to the ending of FT 0. There are plenty of things happening in the Grimmswood even without following the "path", and, of course, the judge can then devise merchant trains to rob. When FT 2 describes Portsmouth, that is another location that the judge can use in his campaign milieu. There is no reason why the judge cannot use other modules in the series, for that matter.

The idea of the FT series is that they build upon each other. If you play just one, you have fun. Play two or more, and things start to click into place. You get a better understanding of the game milieu, and you get drawn into a larger supernatural conflict. You do not need to take any particular hook, though, the conflict exists whether you pursue it or not, and the option to get involved exists so long as you inhabit the milieu.

Go ahead. Shake things up. Upset the apple cart. Sooner or later, you are going to have to anyway. Even if you use all of the FT series modules, you'll want to include more than one adventure per level by the time the PCs hit level 2+, and you won't want any of them to be "fillers"!

Posted by ravencrowking at 14:16 2 comments:

Pesh Joomang, the Gate and the Keeper

This was originally intended as a perk for the Angels, Daemons, & Beings Between Indiegogo project. As far as I know, no one ever received a copy of Pesh Joomang, the Ultimate Patron, as a benefit of funding. As full payment for the project included two hard copies of all materials, which were never received, and as my attempts to contact project head Sean Connors have failed utterly, I have decided to share Pesh Joomang here.

If Sean would like me to take the material down, or wishes to make any claim to it, let him contact me.

If you look at the patron's name, and remember the fondness for anagrams and near-anagrams that infused the early hobby, you will understand the patron better. If I had been writing this now, there would be some real differences - there would be reference to Pesh Joomang as "the Dark Master", for instance, and I would have had a lot more material to work with for his henchmen. I would certainly have found a way to work Doug Kovacs into the equation!

You may need to go back to 2012 to fully "get" the artifacts mentioned herein, but I imagine that some readers may even now be wearing the mystic Buckle of Pesh Joomang or the Tunic.

There are five fully developed patrons in the core rulebook, and three simple entries for patrons that do not include information for spellburn, patron spells, and so on.  There are also thirteen fully developed patrons in Angels, Daemons, & Beings Between.  When you wish to roll a random patron, you may use the table below.  If you have access to other patrons, through other products or of your own devising, you may add them to the table, or devise a new table that better meets your campaign needs.

The Tunic of Pesh Joomang is of well-spun white cloth, with red sleeves coming but midway to the forearms of the wearer.  Upon its breast is a black skull sigil.  Only a human or an elf may wear the Tunic, for it does not change sizes to match its wearer.   Any who wears this potent artefact gains a +2 bonus to all spell checks and Will saves, and gains a +4 bonus to AC.  Further, armour can be worn over the marvellous Tunic, although the fickle magic it commands causes the fumble die for the armour to increase by one step up the dice chain.  A creature wearing the Tunic has a –2 penalty to Luck so long as it is worn.  Further, others who learn of the Tunic are apt to desire it, potentially making the wearer a target of others.

The Buckle of Pesh Joomang is a brass buckle, of the type that might secure a belt or a baldric.  It is etched with a hideous three-eyed face.  Six strange runes within the mouth of the face deliver a message that even magic cannot unravel.  The Buckle can allow its wearer to reroll any one die roll at any time.  Each time this is done, though, one of the eyes closes.  When the third eye closes, the Buckle vanishes, reappearing somewhere else in the multiple universes, to be found and used by another adventurer.