Music: A California raisin can use its Action Die to perform music, rolling with a +8 bonus. This sets the DC for a Will save; those who can hear the performance and fail this save spend the next 1d3 rounds dancing (losing all other actions).

Dance: When engaged in melee combat, a California raisin can use its move to travel up to 10' without provoking a free attack. When doing so, it can cause an opponent within melee range to succeed in a DC 10 Will save or move with the raisin, ending within melee range but at a specific point chosen by the raisin. California raisins will use this ability to dance opponents into dangerous terrain, or even off the edges of cliffs! 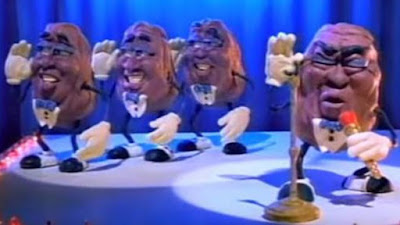 At least four such beings still wander the world. A.C, Beebop, Stretch, and Red. Each is a powerful musician, using vocals, drums, guitar, and bass respectively. Their music is classical rhythm and blues from the place they once dwelt in. Their high AC comes from their ability to dance with opponents, perceiving their attacks in their body language almost before the opponent knows what they will do.

There may well be other California raisins still in existence - they used to come in units of about 50!

The California raisins are short by human standards, but they have large faces and considerable mass. They are not typically hostile, but will certainly use their abilities to protect themselves. The roam the world seeking the last of the Sun Giants, the Sun Maid, who they believe can restore them to their lost home.

Rumors suggest that a being who consumes a portion of a slain California raisin's sugar-dusted body gains a bonus 1d6 permanent hit points. This bonus may only be gained once. Raisins are, some would claim, good for you!

(Canid manimals and other canine or semi-canine beings should be warned, though, that California raisins are even more poisonous to them than normal raisins are. Should a canid consume a portion of California raisin, it takes 1d5 temporary Stamina damage and must succeed on a DC 15 Fort save or die in 2d7 rounds,(

Posted by ravencrowking at 21:07 No comments:

It's all fun and games until someone loses an.....

EDIT: I have been told that finding these games on the Tabletop site is difficult. Here are direct links:
Fire on the Mountain
The Arwich Grinder

Empire of the Cyclops Con!

Posted by ravencrowking at 12:13 No comments: 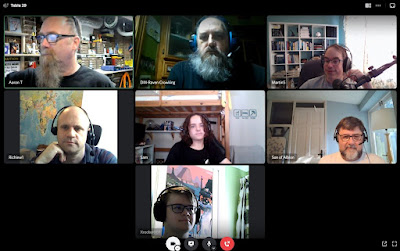 Albacon was last weekend, and I ended up running a game for the convention. First off, Albacon is run to support a worthwhile cause. Secondly, the organizers are fantastic people. Third...well, do we really need more reasons than that?

Restraints on time and energy prevented me from submitting more than a single game this year, And, while I suck at remembering to take screen shots while running games, at least one of my players was good enough to remember and post one!

The game I ran was Night of the Comet, which was a playtest scenario. This was a good example of why playtesting can be important, because while the players seemed to be having fun, there were areas of the scenario which definitely need work. Many thanks to Julian, Richie, James, Sam, Martin, and Aaron!

Posted by ravencrowking at 11:59 4 comments: