How To Guides Galore 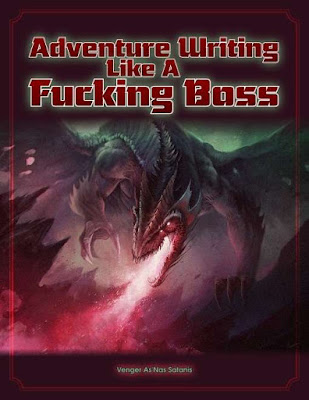 How do you write a great adventure?

Anyone who has ever put pen to paper in this hobby knows that is the $1,000 question. It  would be the million dollar question, but, let's face it, very few of us (if any) are making that much off this gig.

I've given my own answers in the Dispatches series (published by Purple Duck Games), particularly the 2nd volume. If interested, you can find them here: Volume 1, Volume 2, Volume 3, and Volume 4. However, my goal here today is not to talk about my own work, but the work of others.

Adventure Writing Like a Fucking Boss and How to Game Master Like a Fucking Boss are both written by Venger As'Nas Satanis. The first book is illustrated by Bojan Sucevic, Monstark, and Glynn Seal. The second is illustrated by Zarono, Terry Pavlet, Randy Musseau, Monstark, Jez Gordon, Craig Brasco, Joshua Burnett, and Stephan Poag. Both books are published by Kort'thalis Publishing. 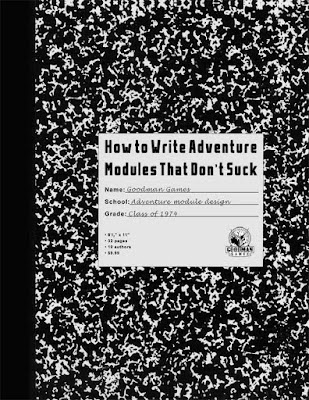 It should be obvious, because I am talking about all three, that I have purchased and own all of these products. None of them were provided for me, but you should be aware that I have published material with Goodman Games, and continue to do so, which may affect my judgement somewhat. I have actually met one or two of the Goodman Games authors in person, and enjoy their company. Take that into account.

It should be taken as a given that I don't agree with all of the advice given in these books. The current Goodman Games book was written during the era of 3rd Edition publishing (the text is copyright 2007), which means that some of the advice is based around what amounts to the highly structured adventures of Wizards of the Coast Dungeons & Dragons - a far cry from what is needed in a Dungeon Crawl Classics or an Old School adventure IMHO.

I would have love to see an updated version with essays by the likes of Harley Stroh and Michael Curtis. It looks like that is coming! In fact, I think some backers have already received theirs; I will try to comment on this more when I have a copy of the new text in my hands.

Meanwhile, much of the advice in the version you can get from RPG Now is solid, though, and if you hope to write for Goodman Games one day it is probably worth your while to know what Joseph Goodman is looking for. You might want to try to get the expanded version from your Friendly Neighborhood Game Store, though. 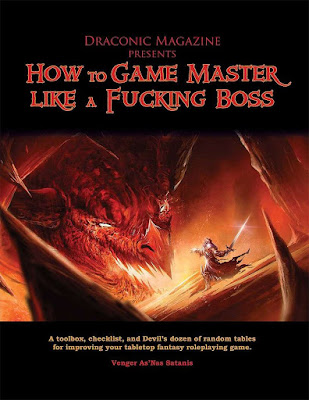 Adventure Writing Like a Fucking Boss is shorter, cheaper, and an easier read. Most of the advice in here is good, although there are a few things I disagree with. For instance, in The Arwich Grinder, children are included in the opposition. There are tables included to spur the prospective adventure-writer's imagination, but they are not very extensive at all. On the other hand, Venger's distinction between rails and guardrails is a good one, his writing style is conversational, and his description of adventure structure is pretty well spot-on.

I've owned How to Game Master Like a Fucking Boss for a while now. At first, I bought the book in pdf, but I was impressed enough to buy dead tree copy. It's worth getting. For one thing, there are far more extensive (and useful) tables. For another, it gets a bit into the author's philosophy on running games - not only how, but why, we do this. Even if you don't agree with everything Venger says (and I don't - is it really important to have matching dice? I tend to think not) the essays are none-the-less thought provoking.

So, which should you get?

I will be headed to Scotland in mid-August.

If any readers live in Scotland, give a shout out!
Posted by ravencrowking at 20:32 10 comments: 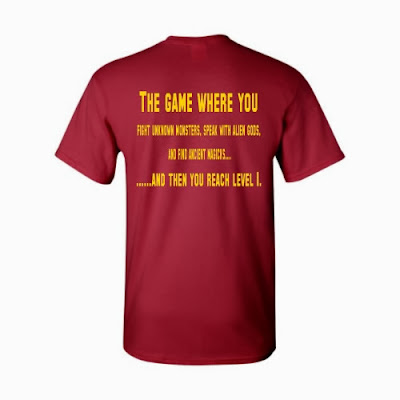 In the Shire, the hobbits give others gifts on their birthdays, and I have been doing the same with a "Birthday Mathom" every year for the last several years. Here's how you get this year's version:

(1) Post online, anywhere, a review of any Dungeon Crawl Classics product between now and August 3rd. Need a list of DCC products? Here you go!

(3) Send me your email address at ravencrowking at hotmail dot com.

Each of these steps is important. The mathom is always a pdf, so I need an email address to send it to! That seems to be the step I need to remind people of each year. But, really, it's not too hard....in fact, it's a piece of (birthday) cake!

Posted by ravencrowking at 15:06 4 comments: