Journey to the Crypts of Orderly Death 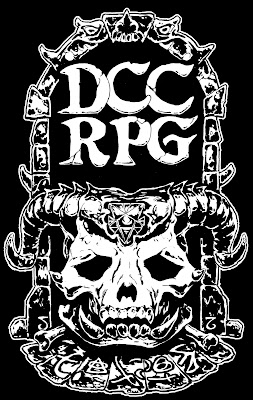 For Free RPG Day (Saturday, 25 June 2022), I will be running a 3rd level adventure, Journey to the Crypts of Orderly Death, at The Sword & Board in Toronto. Mask and vaccine mandates are in place. You must be able to show proof of vaccination.

The Sword & Board has notified me that they will not be open until 2 that day (I had provided 2 hours grace from their listed opening time!). Still, they have continued to support FRPG Day and DCC Day through the pandemic, and for that I am truly grateful.

Sorry for the inconvenience.

This is a playtest for eventual publication. Pregenerated characters will be provided, but feel free to bring your own!

Posted by ravencrowking at 21:36 No comments: 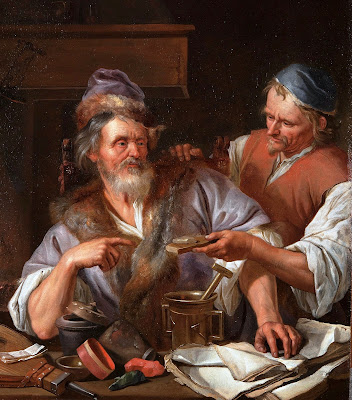 Tuirgin left a comment that I managed to delete trying to publish it. To wit:

I've seen people mention that you've run multiple DCC Xyntillan campaigns. I've been prepping Xyntillan for my group and finally decided to use DCC for it after considering several other options. While I've run DCC before, it's been a while—I took a year away from it to solidify my referee foundation with B/X—and I've never converted adventures for DCC. I'm familiar with two or three of your articles about conversions, but one question I haven't figured out is whether to adjust NPC (especially classed NPCs) and creature levels/hd. The group wisdom seems to be that 1 DCC level is roughly equivalent to 2 D&D levels. I'm curious what you think of this. I've not really run enough games beyond low levels to have a good sense of the implications. Any insight you have to share would be much appreciated.

I am going to try to answer this here. Germaine to this discussion, see my overall notes on conversion here (somewhat revised in DAMN #1), and some examples here and here. You will find a breakdown of the monster statblock here, and some notes on NPCs overall here and here.

For NPCs, the “Men and Magicians” section of the core rulebook (pages 432-434) is the most relevant, as is the “Monsters Don’t Play By the Rules” section on page 383.

In general, you have three choices when it comes to converting NPCs: (1) Use the examples in the book, (2) Make a fast and loose conversion, or (3) Make a fully leveled conversion following the same rules the PCs use. The core rules don’t encourage that last options, but many published adventures use it, so you might also want to use it for important characters. We will look more closely at each of these options below.

(1)    Use the Examples in the Book: For many NPCs, you don’t need to be concerned about how to convert them. You just give them NPC stats using the examples in the “Men and Magiicians” section of the book. For instance, Gilbert Malévol the Fox in Castle Xyntillan might simply be treated as a bandit captain from page 433 of the core rules. There. Done. You may choose to make some adjustments to the core stats, to better reflect the weapons and armor in the original module. Or you may not. It’s up to you.

(2)    Make a Fast and Loose Conversion: Gilbert Malévol the Fox has the following statblock in Castle Xyntillan:

Working from this as a basis, we probably want to keep Hit Dice the same, at least up to 5th level, after which we need to consider how powerful we want our NPC to be in comparison to the rest of the world. I find that assuming a bonus to hit of +1 per 2 HD rounded up usually works well, although this should be adjusted up or down depending upon the nature of the NPC being converted. From this, we might get a DCC statblock like this:

(3)    Make a Fully Leveled Conversion: If you want to go this route, my recommendation is to go to Purple Sorcerer and use their online tools to generate the character, and then modify as desired to create an appropriate statblock. As a pro tip, consider making four characters, using the “Upper Level Text” style, and then select the one that is closest to what you want for the NPC. Tweak as necessary. In this case, I went for 10 versions, so that I could be certain of getting a +2 bonus to Agility, and it still took me multiple tries. (I did not want to have to recalculate thief skills.) In this case, I have selected:

The inevitable question will be: Which one of these builds is right? And the answer is: Any of them or none of them. Whatever the judge chooses to use is right.

If the NPC in question is a spellcaster, you have a few more choices to make. None of these have “right” answers; do what feels best to you:

A.      Should the spellcaster even cast spells? This is especially important when converting NPCs from systems where everyone (or almost everyone) is a spellcaster. If you can make the character work without casting spells, you might want to consider going this route. This is also a good tactic if the NPC is of some goofy species that your setting doesn’t support. If a warrior is a gnoll just to be edgy, consider making him a human wearing a hyena skin instead.

B.      Can you just go the “special ability” route? If you look at some of the write-ups in the core rules, like Acolyte and Magician, you will see that their spells are not fully fleshed out. For minor characters, this is a great option because you are not wasting a lot of time figuring out how to convert spells. Just choose the effects you most want, come up with some cool presentation (i.e., what the spell looks like when cast) and call it a day.

C.      Do you need full-on spells? This does facilitate a spell duel, after all, but it is a bit more complicated. The best solution is to decide what spells the NPC should have, and then give the NPC an appropriate spell check modifier. Feel free to add unique visual or knock-on effects to these spells. They do not have to match the Mercurial Magic and/or Manifestation results in the book. When you are done with that print the NPCs spells out using the Sorcerer’s Grimoire at Purple Sorcerer. It will save you time at the table. This is a good practice for NPCs found in purchased adventures as well.

Finally, consider the words of Joseph Goodman when putting the finishing touches on your conversion:

Spellcasters in particular, whether human or monstrous in nature, should have powers that are unavailable to the players. This does not mean fully defined spells of the same sort learned by the characters. This means a unique power of some kind that would provide a plot hook, leading the player characters to seek out the wizard character and attempt to enlist his services, either as a an ally, hireling, or hostage. On the next page [p. 384] is a table of inspiration, but note that these powers should not be spells. The NPC should be able to use these powers with predictability and accuracy in a way that player characters cannot. It is left up to you to flesh out these ideas, which can apply to any wizard, sorcerer, shaman, witch, warlock, acolyte, priest, cult leader, or other such figure.

TL;DR: Don’t let worrying about how to do it “right” detract from the game. DCC fully empowers you to make it up! 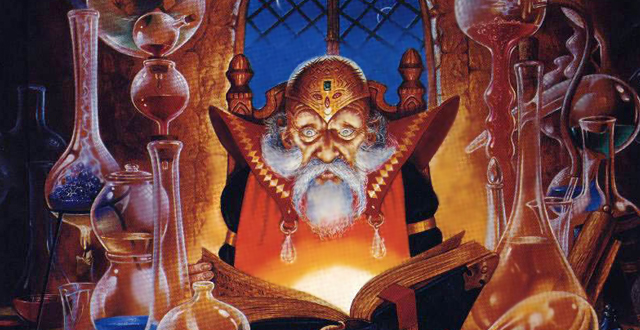 Posted by ravencrowking at 15:34 2 comments: 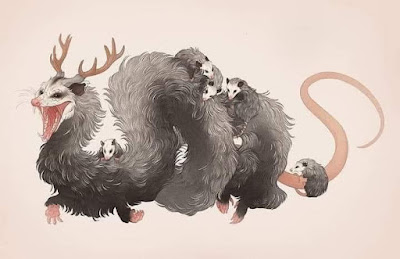 Michael Curts posted this image to Facebook (artist unknown). and the call immediately arose for game stats. Well, here are some game stats you can use! This is built off of the dragon generator from the core rules, by way of the Purple Sorcerer dragon generator, modified to make the creature better fit the image.

Martial Power 1: Play dead. When reduced to 20 hp, the opossum dragon rolls over and pretends to be dead, giving off an awful stench. Living creatures (apart from opossum dragons) must succeed in a DC 21 Fort save to remain (or approach) within 30', and creatures which succeed suffer a -1d penalty on the dice chain while within this radius. This state lasts for 1d3 x 10 turns, or until the dragon is reduced to 10 or fewer hp (at which point it will flee or fight).

Martial Power 2: Retinue. The dragon is always accompanied by a retinue of 1d4+2 loyal followers (young opossum dragons, stats below).

Unique Power 1: Speak with animals (1/hour). The dragon can designate one animal and communicate effectively in that animal’s native tongue for the remainder of the hour. The animal still cannot communicate beyond the limits of its intelligence and physical abilities.

Spells: The opossum dragon can cast spells with a +2 bonus to the spell check:

Unique Power: Charm (1/hour). The dragon can charm one living creature. Target considers the dragon its closest friend for 1d4 days or until attacked or betrayed by the dragon. Will DC 13 resists.