Caring About Characters and Plot

In his most recent "Roleplaying Tips" email, John Four writes:

How do you get players to care about their characters and your plot?

This is in the top 10 questions I get asked all the time. It's tough to do. Today I'll share one approach to encounter building that's part of the 5 Room Dungeon product I'm working on that helps you solve this tricky problem.

Here's the situation. You slave away crafting an awesome situation using the encounter triangle. You've got location, foes, and plot. You even add green flocking to your minis.
But then the hobos rip right through it. As the first foe starts to parley, the barbarian hurls a handful of dice in his face and cleaves the second guy on the backswing.

You then try to roleplay during the combat. But each word just buys the PCs time to sharpen their weapons, including the cleric (hey, how did the cleric get an edged weapon!).

In frustration, you bargain.

Johnn: "Hey guys, these baddies might have some important information. Maybe you should try talking to them."

The problem that John is describing here is a direct result of the PCs' actions having no consequences.

If the baddies have important information, and the PCs slaughter them, let the PCs find that out the hard way. Now the characters have a problem of their own creation to deal with, and the GM should absolutely not be helping them out. What he should be doing is letting them know that "John the Knife knew, but he was slain by adventurers some time back" or whatever is appropriate. Let them know they made the problem. And then let them solve it.

Here's another potential consequence: The PCs cannot always go through the baddies like a hot knife through butter. What if the GM occasionally includes baddies that can beat the PCs? Or can be so costly to beat, in terms of resources, that the fight is more of a loss even if the PCs win? There is no reason for the players to try diplomacy if the sword always works.

If you want the PCs to talk to your villains, you need to make sure they see, early on, that powerful foes are willing to talk to them, rather than simply wiping the floor with them. You also need to let the players see that this works....rather than stripping the PCs naked and taking all of their stuff, a powerful monster will let them go for information. And, perhaps, that powerful monster offers them some information if the PCs are reasonably polite.

Nor do the PCs always have to meet the baddies in a bleak dungeon with no one else around. Why not during a masked ball, a church service, at a wedding or a funeral, etc.? There are all kinds of circumstances where swords and spells are simply unacceptable.

You get players to care about their characters by making them work for what they get.

You get players to care about your plot by making understanding your plot integral to that work.

When players have to work to make their characters what they want, not only is there an actual history to the character, which the player can take pride in, but the character represents the effort of the player. And you can be certain that players value their own effort!

That said, if your game depends upon the players making a particular choice, you've got a problem, because players will often make some other choice...and they should be able to do so.
Posted by ravencrowking at 10:18 1 comment: 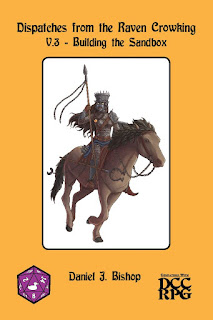 
Sorry about the lack of strong content in this blog over the last few months. Product announcements are all find & dandy, but I promise to get back into more meat & potatoes posting as well this year.

Posted by ravencrowking at 12:15 2 comments:

I will be running the following events at GaryCon. Tickets are now available:

Hope to see you there!
Posted by ravencrowking at 19:03 2 comments: