Looking Back at the Bride of Cyclops Con 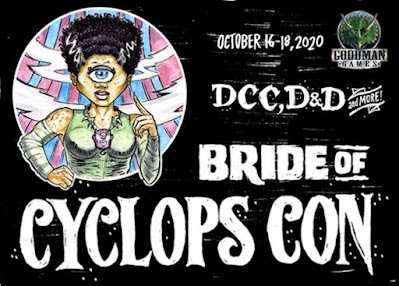 After being a little slow on my AlbaCon write-ups, let me see if I can be less tardy with Bride of Cyclops Con. As with the previous convention, playing at home meant balancing the needs of my family with time to game, so I only ran 3 games on the weekend. If you compare that with my average of 6 games at Gary Con, you will see that I actually do try to achieve some sort of equilibrium.

It was wonderful to not only game, but to talk to so many other people in this pandemic year. I go to work, and I have to be physically present in my job. Compared to others, I have had it fairly easy. Nonetheless, 2020 has been a steady drain on energy, mood, and creativity - and everyone waiting for FT 3 knows that my creativity has been depressed for a few years now.

The Tribe of Ogg and the Gift of Suss

Saturday morning started with a delve into prehistory, very much inspired by Manly Wade Wellman's Hok the Mighty and Edgar Rice Burroughs' stories of Pellucidar. The PCs were cavefolk of the Tribe of Ogg, who venture into the Dread Forest in search of what Suss, the Sun God, threw to the earth.

This funnel has some potentially deadly encounters, including an early encounter with 6 hyenadons. The PCs decided to camp out without a guard, leading to a nighttime surprise that, due mostly to poor rolls on my part, ended in a near-complete victory for the Stone Age humans!

They encountered the Father of Pigs, but missed the space princess and the Gnarl-Gnarl cookout. That last was probably a good thing. Still, they had enough encounters - and rolled well enough - that a majority of the PCs survived to reach level 1 within the Gift of Suss.

Despite a high survival rate (which would turn out to be par for the course this convention) the players had fun exploring the Solar Bequest, and as the ship began to go through its dimensional shifts, an actual encounter with Cthulhu was a definite high point. You would think the monstrous nature of that encounter would have blasted at least a few minds, but where I roll low, they rolled high.

The Tribe of Ogg and the Gift of Suss can be picked up for free on the Mystic Bull website, here. The authorized sequel, by none other than Bob Brinkman, appeared in a free Sanctum Secorum Episode Companion.

Many thanks to Bjorn Nelson, Matt Thompson, Jack Derricourt, Jason Menard, and Jesse Withrow for making running the game a blast! You may have survived more than you should have, but it was entertaining to see how it all played out! This game ran a little over, and I am thankful that all of you were willing to stay to the end!

Danger in the Deep!

When I set up this adventure, I decided to give every player a backup PC because I expected several deaths. There was not a one...but not for lack of trying!

This scenario includes some really serious hazards related to three-dimensional spaces and running water. Even entering the caves can be hazardous unless you have more than 100' of rope. Our party used 150', and still had rope enough left to meet some of the other dangers to come.

The party's greatest peril occurred when they met the Spinwoman, who nearly slew the group's halfling. A lucky crit with a crossbow brought her down...but by that point it also meant 4d6 damage for the halfling and 3d6 for two other party members as they were no longer being pulled aloft. Thankfully, the party included a cleric.

Part of the fun of role-playing games is the role-playing, and the snailtaur potion masters were a big hit. Charm person proved a powerful tool, due to good rolls, dealing with two major encounters. The second usage - against a gigantic spellcasting slug - triggered a spell duel, but I rolled so poorly with my counter that the players barely noticed.

There are a lot of ways to die in this adventure. Several are natural hazards. You can end up in a swiftly flowing cavern stream and sailing off down a waterfall, for instance. The biggest treasure - which the PCs never encountered, requires swimming or cleverness to get it. There are plenty of chances to die in combat or to fall to your doom. The players avoided making any decision that would lower the boom - or rolled well enough to avoid the consequences when they did - that they all survived.

The paranoia, though, was palpable. This is DCC, and you are careful what you touch!

Many thanks to Gray Freeman, Wes Baker, Michael McMurray, Cristopher Messemore, and Ryan Bishop (no relation).

The Weird Worm-Ways of Saturn

On Sunday, I ran The Weird Worm-Ways of Saturn and The Vault of Ash back to back. This is actually both parts of a two-part adventure, which I ran as a single event. It was 5th level, so rather than go the route of the awesome Purple Sorcerer generators, I decided to allow the players to choose from among 10 fictional characters I had given DCC stats.

The party consisted of Bilbo Baggins, Thorin Oakenshield, Conan the Cimmerian, Captain Jack Sparrow, and Severus Snape. We were expecting Tarzan of the Apes as well, but he was called to the lost city of Opar at the last minute. If you are curious about these characters or the others which were on offer, you can find them here. I claim no rights to the art or the characters; this is strictly personal use! The players did not get to see the write-ups before choosing.

I allotted six hours for the game. We ended up using just over 5 hours. With Captain Jack's compass, a willingness to risk the spires, and a dearth of random encounters, the PCs did very little actual exploration of Saturn. In truth, I sped up the magnetic flux a bit from how it is written, giving Bilbo the chance to encounter the ceiling when his mithral shirt was repulsed, and then encounter the floor a few rounds later. Bilbo broke both an arm and a leg.

The Vault of Zin is designed to eliminate PCs unlikely to restore the fallen sorcerer. There are rooms designed to specifically kill wizards and clerics, but the party contained no cleric and it was Captain Jack Sparrow who nearly killed himself in the wizard trap. There is also a room designed to slay those who are too clever - if it were not for a few lucky rolls, that room might have been the end of one or more PCs. It didn't help that I fumbled.

The party ended up taking the Red Metal Door to escape to Venus, and chose to avoid interacting with the idol, thus missing the three greatest dangers they could have faced. Even so, without a cleric, they were lucky to have the Hogwarts Potion Master in their ranks, because he had a few choice flasks at his disposal.

Many thanks to Paul Paul, Steven Danielson, Squin Squin, John Dow, and Tim White for joining me on this voyage!

As with many other Cons, I produced some virtual swag, which you can find here.

The DCC RPG community - online and off - are a fantastic bunch of folks!

Posted by ravencrowking at 21:24 4 comments: 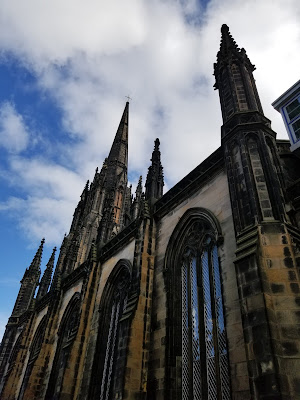 Posted by ravencrowking at 20:50 No comments: