Testimony of the Ancients 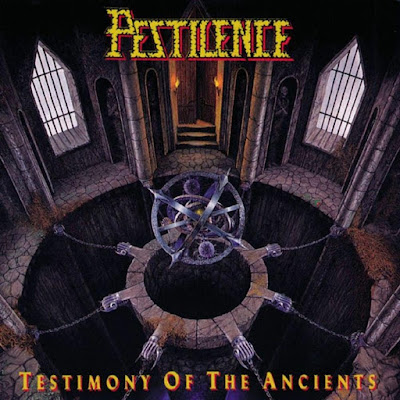 Okay, this is another album cover requested by Doomsayer. Never let it be said that I don't respond to reader comments!

(Even if those responses are not always timely!)

At first glance, this appears rather static, with little to stat. Looking closer, we see some form of mummy-like cadavers in the niches...one must guess that there are 16 of them in the chamber. There are also what appear to be swarms of worms at various points. Finally, what is that armillary sphere doing floating over a hollow stone column?

The High Citadel of VanDrunen is situated far up Mount Mameli, were a central shaft leads downward from the highest redoubt into an unknown dimension revealed to man only through realms unseen, where there is no light and light cannot be.

From this high place, the Pestilent Ones perform ceremonies to summon gods from the Outer Dark to inhabit their bodies, burning them from within and without, but allowing them to take on forms that are immortal save injury or accident. When a Pestilent One has lived as long as they wish to live within a given body, another ceremony is held to conjure a demon to replace the god, making their bodies mortal - subject to disease, poison, and aging once more. The Pestilent One sacrifices themselves to the Shaft of Eternity, and is incarnated again in a new form. This process inevitably drives them mad.

If a Pestilent One is reduced to 0 hp, it collapses into a Wormswarm of the Outer Dark (see below). If the wormswarm can make it to the Shaft of Eternity before being destroyed, the Pestilent One can be reincarnated.

The Sphere of Time

This appears to be an armillary sphere, similar to those used to track the motions of stars and planets, which is kept suspended over the Shaft of Eternity. In fact, it is a more complicated device than this, used to select worlds and times wherein those sacrificed to the Well of Eternity will incarnate anew.

If a PC attempts to use the Sphere, the following results occur depending upon the value of the Intelligence check:


Note that when a result is off, it always appears at an earlier time than intended. Note also that, if the Sphere of Time is removed, it could potentially be used in conjunction with planar step as a form of dangerous time travel.

The Shaft of Eternity

If a creature falls down the Shaft of Eternity, it is reincarnated (if possible) at whatever point the Sphere of Time last indicated. If the Sphere is removed, the falling creature is lost forever into the Void of Time. Climbing the Shaft is a DC 25 task, and a check must be made for every 15' climbed. If a climber passes out of sight, treat it as though they have fallen.

The 16 Guardians of VanDrunen protect the Shaft of Eternity from any who approach it, unless they are Pestilent Ones. On a successful strike, a Guardian infests its target with flesh-eating worms (Fort or Reflex DC 12 avoids). The target takes an additional 1d3 damage each round until the worms are removed, and multiple hits stack. These worms can be removed with 3 HD of clerical healing, of with the application of fire (causing 1d6 damage) and a successful DC 15 Intelligence check.

The Guardians are immune to mind-affecting attacks and cold, but take twice normal damage from fire. They are not truly alive, dead, or un-dead, being wholly outside the natural order, and can be Turned as Unholy by clerics of any alignment.

Wormswarm of the Outer Dark

A wormswarm fills a 20 x 20 area, and attacks all creatures within that area. It can move, including withdrawing from combat, without provoking a free attack. The wormswarm will always attempt to escape to the Shaft of Eternity, inflicting as much damage as it can on the way. If a single worm escapes, the Pestilent One it is part of may be reincarnated.

Note to Judges: If a wormswarm (or part of a wormswarm) escapes into the Shaft of Eternity, the reincarnated Pestilent One may immediately return, fully healed, to join the combat. For the PCs, but a moment has passed. For the Pestilent One, years, centuries, or even millennia may have gone by. Certainly the returning Pestilent One will know far more about the PCs than it previously did!

You can listen to the full album here.
Posted by ravencrowking at 14:50 3 comments:

The Lord of the Rings on Appendix N Bookclub 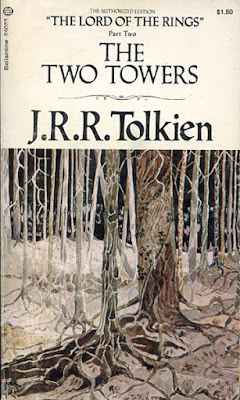 For another take on The Two Towers, here is Anna B. Meyer on the Appendix N Book Club.
Posted by ravencrowking at 09:53 No comments:

Things you should know when embarking on a career as a DCC judge: