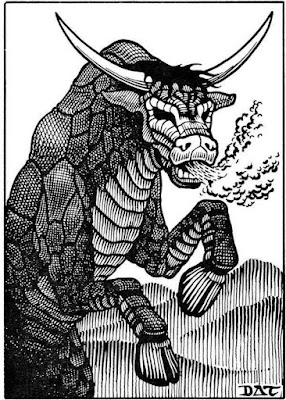 For some reason, when he was writing the White Box set for D&D, Gary Gygax decided to make Gorgons not Medusa and her immortal sisters, but metal-plated bulls with petrifying breath. This has been how gorgons were depicted in every edition of the game thereafter.

This may have been inspired by The Historie of Foure-Footed Beastes, written by Edward Topsell, and published in 1607. Or it might have been influenced by Topsell's book indirectly, as I have seen occasional references to D&D-type gorgons in other works. Although I could not for the life of me tell you what those works were, I am fairly certain that they cribbed from Topsell, who would have long been in the public domain by the time they were written. Topsell's gorgon had poisonous, rather than petrifying, breath from eating poisonous herbs.

Other potential sources for the monster are the Greek Khalkotauroi or the Ethiopian Catoblepas, although that had its own entry in the AD&D Monster Manual. It seems likely (to me) that, regardless of Gygax's source, the gorgon's breath became petrifying because the creature's deadly breath was conflated with the Gorgon Medusa's ability to turn the living to stone.

Here are some statistics for using the bull-type gorgon in a DCC game:

Deadly Breath: A gorgon has a breath weapon that forms a cloud with a 20' diameter, affecting all creatures within. To determine the effects of any given gorgon's breath weapon, roll 1d12:

(1-5) Petrifying. Victims must succeed in a DC 10 Will save or take 1d8 points of permanent Agility damage. This represents the body of the victim turning slowly to stone, and can be healed only by strong magic or bathing in the blood of the gorgon responsible. If Agility reaches 0 through this damage, the creature is completely petrified.

(6-9) Poisonous. Victims take 1d6 damage and must succeed in a DC 12 Fort save or take 1d4 points of temporary Stamina damage.

(11) Memory-Eating. Victims must succeed in a DC 10 Will save or lose 1d6 XP. This can reduce characters' levels, as their memories of past success are eaten away. Anyone reduced to 0 XP takes Intelligence damage instead on a failed save.

(12) Pestilent. Victims must succeed in a DC 15 Fort save or become ill, taking an immediate 1 point of temporary Strength, Stamina, and Agility damage. Each day thereafter, the victim must make a DC 15 Fort save or suffer an additional 1d3 temporary damage to Strength, Stamina, and Agility. This damage does not begin to heal until the character has succeeded in three saves, which ends the pestilence, or the disease is removed by other means. Worse, the victim is contagious, and anyone in their company must make a DC 15 Fort save after each hour or fall victim to the same pestilence.

Posted by ravencrowking at 22:35 No comments: 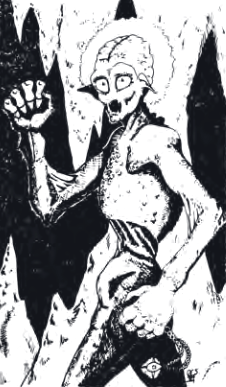 In certain dark corners of the world, unwary travelers may meet normal-seeming folk who are anything but. These creatures are humanoid shape-shifters, able to read the surface thoughts of any creature within 500', and fit their shape to meet the expectations or needs of those they encounter. Doppelgängers seek to join groups, where they can pick off and consume group members one by one, assuming the identities of those they consume to further sow confusion.

Doppelgängers are naturally about human-sized, and can form themselves into the likeness of any humanoid from 4 feet to 8 feet tall. When imitating another creature, their bodies form to appear like the equipment and weapons of the imitated being. Should they lay down a piece of equipment, fire a missile created from itself, or be disarmed, the lost item collapses into a pile of fetid gray goo within 1d3 rounds. The doppelgänger can reabsorb this goo without harm to itself, as much as seven days from when it was shed. Similarly, a slain doppelgänger retains its chosen form for 1d3 rounds before shifting back to its base humanoid form.

A doppelgänger may change its form, and/or create a weapon as part of a move. One of the creature's favorite tricks is to attack a being, imitating them so their companions cannot track which target is friend or foe. Doppelgänger imitation is 90% accurate, which, combined with their ability to read minds, makes them hard to detect. If a doppelgänger engages in melee with a foe it is imitating, attacks against the doppelgänger have a 40% chance of targeting the imitated character.

Although these creatures are most often solitary, groups of up to 3d4 have been known to cooperate with each other when hunting. When an adventurer goes off on their own, or an adventuring party splits, it is never certain that what returns is the same as what left.