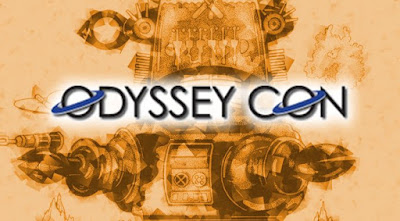 Okay, it is well past time to talk about Odyssey Con, which I attended, along with Brendan LaSalle, at the end of April this year. Con attendance was high for a small con, but gaming attendance was low – largely, I think, because the convention was not set up to allow players to pre-register for games. Nonetheless, both Jeff Bernstein and Forrest Aguirre managed to make it out to play, as well as several people new to Dungeon Crawl Classics.

Full Disclosure: J. Laakso, Secretary and Webmaster of the convention, is also my brother.

Thanks to the generous contributions of Goodman Games, Shinobi 27 Publishing, and Purple Duck Games, Brendan and I were able to spread a certain amount of published Dungeon Crawl Classics wealth around to players, and the convention was able to do a draw for other items – including a Dagon Hardcover of Angels, Daemons, andBeings Between Extended, Otherworldly Edition that had been signed by both myself and co-author Paul Wolfe. 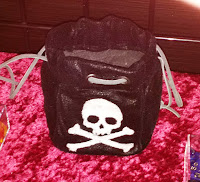 My brother also runs/owns Vault 0, which creates and distributes clothing items for cosplay, as well as some gaming items, such as this pirate-themed dice bag, which I picked up while at the convention. I use a Duluth Trading Companysix-pocket parachute tool bag for a dice bag, which can carry enough dice to kill a small bear.

The Jolly Roger dice bag will allow me to carry a smaller amount of dice for quick gaming, or when I don’t want to have to carry a huge dice bag around at a convention. This last wasn’t a problem at Odyssey Con, but at Gary Con my hotel room was not even in the same building as the convention. The construction is durable, making it somewhat superior to most of the other dice bags I’ve used in the past. Also, the image on it allows the PCs to know what they are in for!

Everyone at the convention was friendly, and I had a great time. Nix, who was in charge of the gaming aspect of the convention, was an excellent host. Unfortunately, no pictures from the Mad Scientist room party, wherein it was demonstrated that my nephew Stefan can make a good Rum and Coke even if he is forced to use Pepsi.

Some highlights from the player's side:


You can read another take on this convention here. 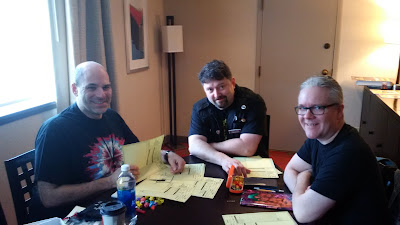 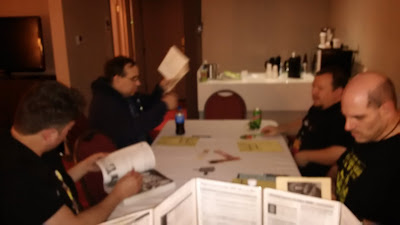 Posted by ravencrowking at 12:44 No comments: 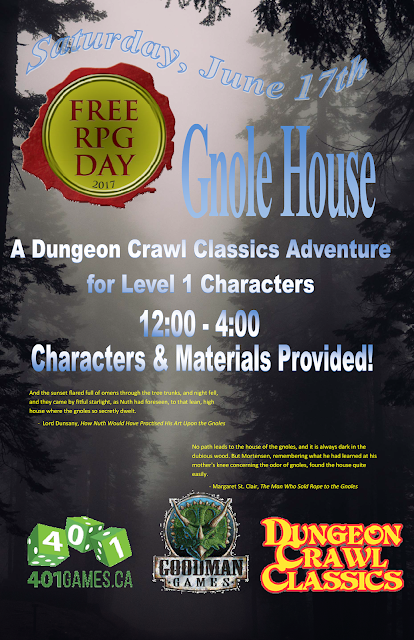 RESERVE YOUR SPOT!
Posted by ravencrowking at 10:30 No comments: