As I imagine anyone reading this blog knows, DCC Days Online Convention ran from Thursday, 11 June 2020 to Sunday, 14 June 2020. Having to work full time last week, and being ever-hopeful of being able to run games in meatspace, I signed up to run two games. Also, I'm running online games from my kitchen table, and there is a limit to how much forbearance I can ask my family for!

As might be obvious, there are going to be a few spoilers below.

On Friday I ran Goblins of the Faerie Wood for William Keller, Ken Kindler, Marlene Whitmer, and Kathy Heatherly. This is a funnel in which the PCs are playing goblins. It went pretty well, although after the goblin PCs beat up the hook-nosed gobbler and dealt with the greywhethers with minima losses, I was beginning to wonder if my jokes about "what could go wrong?" would turn out to be prophetic! Not to worry - when the goblins decided to gather reeds from the stream, things got deadly quickly. The giant spiders also took out their share of 0-levels.

The greywhethers are sheep which turn to stone by day (or if brought to 0 hp). They know the answers to many questions, but asking them a question makes you their lawful prey. Most of the time I run this adventure, this is the first "thinning the ranks" encounter. In this case, not so much. A couple of goblins did get eaten by the carnivorous immortal sheep, but the players actually came up with a clever solution to the problem the greywhethers pose. It is one I had not seen tried before, and had not considered when writing the adventure....so, kudos!

(Solving the adventure requires gaining information that the greywhethers can provide.)

Also unusually, after the PCs acquired a powerful magical item, they decided to keep their earlier bargain and trade it for a charm to cure a toothache their tribal king was suffering from. It is not unusual for goblins to decide to flee their king's territory at this point, and make a new life for themselves as adventurers!

I had no games to run, and The Sword & Board is postponing DCC Day events until things become a tad bit safer here in Toronto, so I didn't get to run anything Saturday. This is completely cool, and I am thankful that the store wants to keep us safe, even though I am jonesing to run something in person. I did get a chance to drop into the Social Hour (with help getting the link from some very astute members of the DCC RPG Rocks! Facebook group). 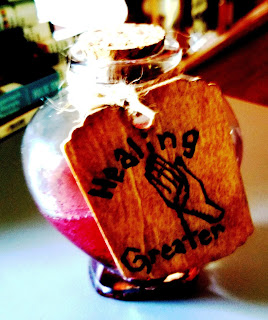 On Sunday I ran The Falcate Idol for Paul Pipeline, Sam Nicholson, Em Hogard, Iain T, and Jeff Kuzniewski. Most of the characters were pregens creating using Purple Sorcerer...and quite coincidentally more than one had an extremely low stat or two.

We almost didn't have a cleric, and I was ready to supply each PC with a potion of greater healing that heals 4d4 damage. This is physical prop made by one of my regular players. There are 4d4 on a resin base inside the bottle; I got to "roll" it several times during the adventure....because the first real encounter made me retcon to allow the potions. There was, very nearly, a TPK in the second room (first real encounter). For those who know the adventure, the PCs went down through the trapdoor.

Despite having a chance to heal and get powered up, and despite an awesome animal summoning spell effect (the PCs booked past the 100 HD of eagles fighting a truly horrific spider-monster, and so missed when it was reduced to 0 hp and exploded into a cloud of spores). If this was being played in a regular campaign, the eagles who failed their saves would certainly come up again.

Several characters dropped several times. The battle to escape the temple's guardians was brutal, and without divine intervention a PC or two would have ended their days as temple guardians themselves. The cleric of Bobugbubilz wound up with the emerald from the idol's forehead, and all that entails.

It was a fun adventure, but it created enough dangling threads that I would really have loved to pull them and see where they went. The CE Series is really designed for campaign play. The Falcate Idol would be especially fun, I think, in the DCC Lankhmar setting....something I may have to run at some point.

Altogether, DCC Days was definitely fun, but it made me want to run games in realspace even more! I wonder....If I got four card tables and spaced them 6 feet apart in some outdoor location......?

EDIT: Forgot to mention the Virtual Swag!
Posted by ravencrowking at 19:16 2 comments: 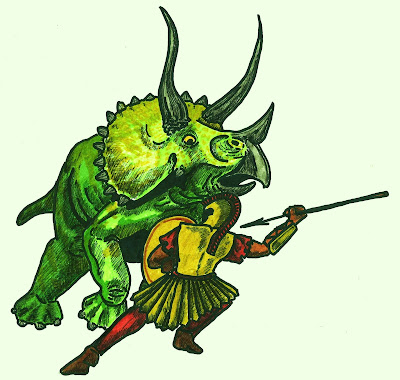 Posted by ravencrowking at 18:54 5 comments: