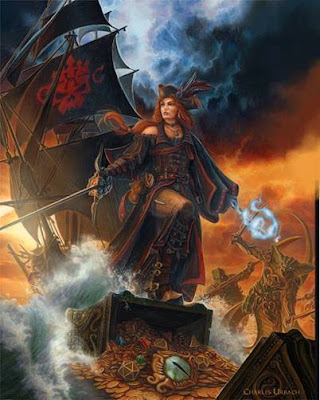 Blood for Cthulhu!
The Black Feather Blade
The Dread God Al-Khazadar
The Imperishable Sorceress
Trail of the Rat
Posted by ravencrowking at 10:25 4 comments:

In the core rules for Dungeon Crawl Classics, the dice chain runs from d3 to d30, as follows:


This is an extension of die pips as follows:


This setup is perfect for most actions within a Dungeon Crawl Classics game, but what if you want to extend the dice chain to something really epic? Note that the additions to the chain here are reserved (in general) for beings so powerful that they are almost beyond mortal means to resist.

My goal was to include the d50, while maintaining a sense that the increases scale upward in a way that grows, or stays the same. There should never be a smaller increase between one step and the step before it.

My extension is therefore

indicating an extension of

Either way, may the Dice Gods help you if you ever run into anything using these extensions!

Posted by ravencrowking at 12:11 No comments:

I am relatively new to running convention games, although I have run games in public venues going back to the 80s. My conventions are, thus far, limited to OSRCon in Toronto, Gary Con (two years now), Odyssey Con in 2017, and Nexus Game Fair in 2016. There are many folks with more experience in convention games than I have, but if you are looking for a relative newbie’s insights, read on.

Choose Your Own Adventure

When planning convention slots, choose adventures that you know well. Obviously, you also want something that will fit into your time slot(s). If you run an adventure that normally takes six four-hour sessions to run, and plan to run it in a three-hour slot, you’ll have to prune ruthlessly. You might consider another adventure. Or a longer slot. Or both.

The adventure should be one with a sense of completeness as a short story. It might also be useful as a chapter of a larger tale, but if it doesn’t come to a satisfying conclusion you’ve missed the mark. That conclusion need not be fun. It can be horrifying. Entire worlds can be saved or lost. It just has to be a definite end, that shows some motion from where the session started.

There are a lot of great Dungeon Crawl Classics adventures to choose from. But I am going to suggest that you branch out – convert your favorite non-DCC adventure. Write your own! One of the best things about Appendix N fiction is the wide range of authorial voices – add your own authorial voice to the games you run!

(And if you don't want to do that, anything written by Daniel J. Bishop should be given preference......lol.)

The Play’s the Thing

It doesn’t matter if you flub a rule. It doesn’t matter if you forget that there was something the PCs should have encountered, or a condition that would have made it easier or tougher for them. If you forget a rule, you can ask the table. Maybe someone knows. If not, just make a ruling and keep the game moving. If it takes more than a minute of flipping through the book, don’t.

There are four things that can help you here:

Setting up the Table

The first year I ran games at Gary Con, my son accompanied me but did not preregister for games. He noted that there were many games seeking players, but no way to guess what was being played without going up and talking to anyone. Because of this, I now print out cardstock signs that identify game and system. I have picked up a metal table stand, not unlike those used for the “Table Full”/”Players Needed” signs for this purpose.

For my second Gary Con, I had a scale version of the DCCTournament Gong arch 3D printed. I assembled it at each game, to help make it seem more like an event. Whatever you can do to stand out is a good thing.

I have also picked up a bag of plastic "gold" coins to use as Fleeting Luck tokens.

My dice bag includes black d20s of various sizes, including one which is fist-sized. I use it for dramatic effects.

I like to walk around the table, in part to give people a chance to hear me, and in part for effect.

Your style of running games? When in doubt, that’s what you should do.

Disagree with anything I wrote here? You should include your own ideas in the comments, for others to benefit from. And you should do whatever you think best. I'm just some guy with my own ideas.

A Few Other Important Considerations

Make sure that, when you schedule your games, you give yourself time to hang out with others and enjoy the convention.

If the opportunity arises to play in a game run by Doug Kovacs, do it.

The odds are good that, sooner or later, you will get a chance to play in a game run by Brendan LaSalle. Do it. If you can buy Brendan LaSalle an after-game beer and just shoot the breeze, do it!

I have yet to get into a Brinkman, Stroh, or Curtis game. Pity me…but, if you get the chance, make sure you take it. At the very least, you can rub my face in your good fortune!

Finally, when you are a player, jump into the weirdness. Play your character(s) with gusto. Have fun, and help to make if fun for everyone. Encourage others to do the same. You aren’t playing with gusto to dominate the table, but to draw everyone else out.

Posted by ravencrowking at 16:07 2 comments: