The first game was Man-Bait for the Soul Stealer, by Terry Olson, which had been released as part of Goodman Games' Free RPG Day content for this year. This game ran from 11 am to 3 pm, with 8 players. At the end of the game, there were only 4 characters left, and that did not include the party cleric! A good time was had by all. The "DEAD" stamp saw use. The party never found Odag's secret stash, as they used the shanatium ingots to smash his soul receptacle without any hesitation. All in all, brutal but fun.

Some highlights included: A naturally-occurring slippery-slope passage (and hole!) divide the party, leading to the first "recover the body" check of the day, proof once again that ropework is a useful spell, Ekim's mystical mask with a maximum result, massive Mighty Deeds, and fantastic rolls for good or ill by all concerned. You're checking to recover the body, and now that natural 20 comes up?

The second game was the first playtest for Lettuce-Gardens of the Foreign Warren, an adventure in which Radu, King of Rabbits, has a task for the characters. Five PCs went in, with a slight change of player roster between games, and four came out.

This one was fun, but it still needs considerable work to be publishable. Nonetheless, the first playtest was a success.

Swag for the event included black plastic DCC logo cups, print copies of the Sanctum Secorum Free RPG Day 2018 Third Party Compendium (which was also available downstairs), and a zine-like sampler from Angels, Daemons, and Beings Between featuring Radu and Mulferret, Queen of Weasels. I also gave away two sets of my two-part Crawljammer adventure: The Weird Worm-Ways of Saturn and The Vault of Ash. Bookmarks and a DCC notebook completed the swag giveaway.

I am very much looking forward to the next one!
Posted by ravencrowking at 12:46 6 comments: 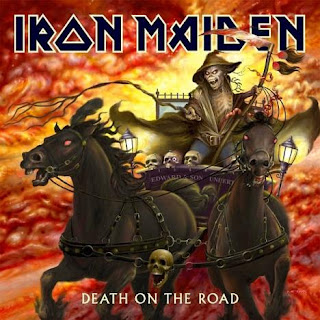 For his cart comes down the lane,
And his lanterns burn with greed,
Race you away, your soul is screaming.
Bone rolling wheels.
O! Old people choke with ashes!
O! Children weep with fear!
Shelter us from his fast reaping!
One more day to exist here!

The Death Cart rolls down the night-dark streets of Ur-Hadad. Its wheels are made of bone, and it is pulled by two black horses whose breath and eyes are fire. Old Edward the Great lets the horses take him where they will, for his un-dead hands are concerned only with the scythe he bears, and the reaping that it does. Lanterns swing wildly behind the Death Cart, whose wheels rumble like thunder. The lanterns are lit with the burning souls of the reaped. The more he reaps, the brighter they blaze.

Any creature hit by Old Edward’s scythe must succeed in a DC 10 Will save or take 1d3 points of Stamina and 1d3 points of Personality damage as the scythe drains a portion of their souls. The lanterns swinging from the Death Cart flare dramatically when this occurs! (See the Death Cart, below.)

When Old Edward is reduced to 0 hp, his body is consumed in a gout of emerald flame. If horses remain, the cart careens off down the streets; if the horses are slain, the entire cart is apparently consumed in flames. The next time that the Death Cart is seen, Young Edward is seen driving the infernal vehicle. Over the next few months, Young Edward ages into Old Edward. There is always a younger Edward, so long as the cart itself endures.

Each of these horses can breathe fire in a 10’ line, causing 2d10 damage (Ref save DC 10 for half), using an Action Die. A horse can only breathe fire once every 1d5 rounds. If the horse uses its hooves to attack, it cannot pull the cart that round. This means either that the cart must come to a halt (if both horses use their hooves), or that the cart is pulled in a tight circle for one round (giving Old Edward and the Death Cart a -1d shift for their next attacks). Each horse has a 1 in 3 chance of using its hooves on any given round.

When the Death Cart is next seen, it is pulled by two horses identical to those which were slain.

The only way that Old Edward can be destroyed is for the Death Cart to be reduced to 0 hp, but this is not an easy task. First off, at least one horse or Old Edward must be allowed to continue attacking, or the cart disappears. Secondly, every attack against the Death Cart reduces the damage done by 5 points. Third, the Death Cart regains lost hit points equal to the attribute damage done by Old Edward’s soul drain. Finally, spells which target the cart are suppressed, having an effect as though they were cast with a -10 penalty to the spell check (this does not change the actual spell check result, just the effect).

If the Death Cart is reduced to 0 hp, there is a clap of thunder, the joyous singing of trapped souls set free, and a distant sound of electric guitars. The streets of Ur-Hadad open to drop the cart into a flaming pit (anyone on the cart must succeed in a DC 10 Reflex save or be lost forever), before crashing shut with a shudder that knocks everyone prone. There is a lingering smell of sulphur and an echo of the wailing of the damned. Everyone involved in destroying the Death Cart gains a permanent +1 to two randomly determined ability scores, a gift from grateful spirits and gods alike.

Posted by ravencrowking at 10:31 No comments: 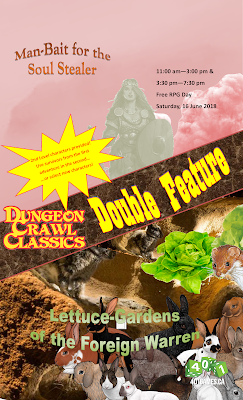 This Saturday, for Free RPG Day, I will be running two Dungeon Crawl Classics adventures back-to-back (with a brief pause for food between them).

They are Terry Olson's Man-Bait for the Soul Stealer from 11 am to 3 pm, followed by the first playtest of my own Lettuce-Gardens of the Foreign Warren from 3:30 to 7:30 pm. The venue is 401 Games at 518 Yonge Street in Toronto. Seating is "first-come, first-served", but I will try to accommodate as many as necessary. You don't need to play both to come out, but characters can be transferred from one game to the next with whatever treasure (etc.) they may have gained. Characters are provided, and I have funky dice to spare if you don't have enough.

Yes, I will be taking names for a playtest credit with Lettuce-Gardens.

Yes, some lucky players will be going home with extra swag.

401 Games has print copies of the Sanctum Secorum Free RPG Day 2018 Third-Party Compendium on hand, so you should drop by for that, and for the Goodman Games release(s), at the very least.

The game will be in the upstairs game lounge area.

Hope to see you there!
Posted by ravencrowking at 08:28 No comments: