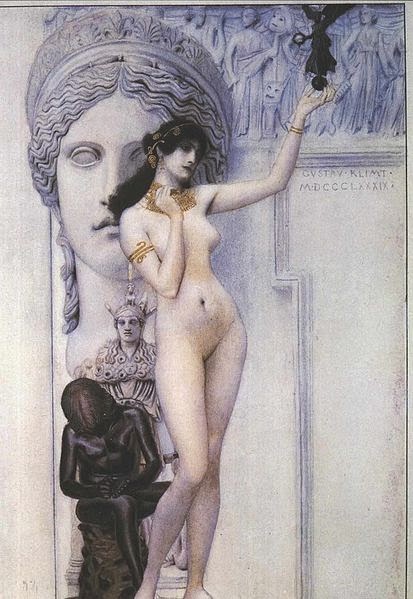 Nymphs are nature spirits that take the form of impossibly beautiful young women.  They may have some inhuman features, such as pointed ears or unusual hair, eye, or skin tones.

Nymphs are tied into some natural site or phenomenon, or exist as the entourage of a mortal incarnation of a deity or powerful cleric.  Thus, there might be a Nymph of the Crystal Grotto, Nymphs of Springtime, Nymphs of the Darkwine River, and so on.

Nymphs enjoy hunting and other sports.  They are noted for their skill with spear and bow.  Some 25% of encounters with nymphs will include 1d6 hunting dogs per nymph.

Many nymphs seem to enjoy mortal company.  Most nymphs limit this company to the presence of women, whom they allow to join in their sports, but 20% of all nymphs are also interested in taking comely mortals – both male and female – as paramours.  Nymphs can bear children with mortal lovers.  Such children gain a +2 bonus to Charisma and a +1 bonus to Dexterity, but are otherwise treated as mortals of their race.  They may have other visible signs of their fey ancestry, based upon their mother’s appearance.

Nymphs prefer to pursue rather than to be pursued, and run away when approached by amorous satyrs and men.  When a nymph runs, she is untiring, able to run at full speed for six hours without a break.  It is difficult for any creature to harm a nymph due to her supernatural allure.  A DC 15 Will save is required to target a nymph with any attack, although once this save succeeds once, the attacker cannot be affected by the nymph’s allure again that day.  As a final method of outwitting pursuit, a nymph may merge with nature as an action, becoming reeds, an island, stalks of grain, or anything else appropriate to the area.  A nymph must succeed in a DC 20 Will save to merge with nature, and this merger is permanent.

Nymphs who are tied into a particular time, such as a season or a time of day, are only present in the material world during that time.  It is as though the intervening time did not exist for the nymph.  Thus, the last day of autumn of one year, and the first day of autumn the next year, are sequential days for an autumnal nymph.  If the nymph has a mortal paramour, she can choose either to take him with her (so that he ages one year for every four, from the perspective of a mortal creature of the material plane), or not, so that he can act in the world throughout the year, but seems to age swiftly before her eyes.