I have been remiss in not mentioning the Iron Tavern's Pocket-Sized Encounter series, even though I have bought them all. So, this is my attempt to make up for it.

Disclaimer: Jeffrey Tadlock at The Iron Tavern has reviewed a number of my project favourably, and I like both the Tavern and its owner.

The Pocket-Sized Encounter series is written for Swords & Wizardry, but translating them in to Dungeon Crawl Classics is relatively simple to do. If you have any experience in conversions, you should be able to do this even while running the adventures. These adventures are designed to be "side quests" that can be played in a single session, allowing them to be used when the PCs go "off the map", or as a part of initial world building when devising the game milieu.

Swords & Wizardry is not as "gonzo" as Dungeon Crawl Classics, but these adventures are interesting for Swords & Wizardry, which means that you can easily use them with DCC.

Kajak's Kave:  Livestock disappearing from their pastures, children discovering large humanoid footprints along the creek, rumored sightings of a lumbering giant, and Shaerie the Huntress’ disappearance several weeks ago leave only one conclusion. An ogre has taken up residence too close to town! Are you the brave adventurers to help rid the town of this threat and discover the whereabouts of Shaerie?

The Hive:  Lord Oakensun was fascinated by insects, spending hours cataloging and classifying his collection. Discontent led the man to experiment with forces he did not fully comprehend. Now farms outside the village have been found abandoned. Lord Oakensun’s daughter is missing, last seen near rocky hills a short distance away. A local thief reports his partner was snatched away in the dark amidst sounds of buzzing and chittering. Has Lord Oakensun’s experiment gone wrong? What is behind the rash of disappearances from the village? 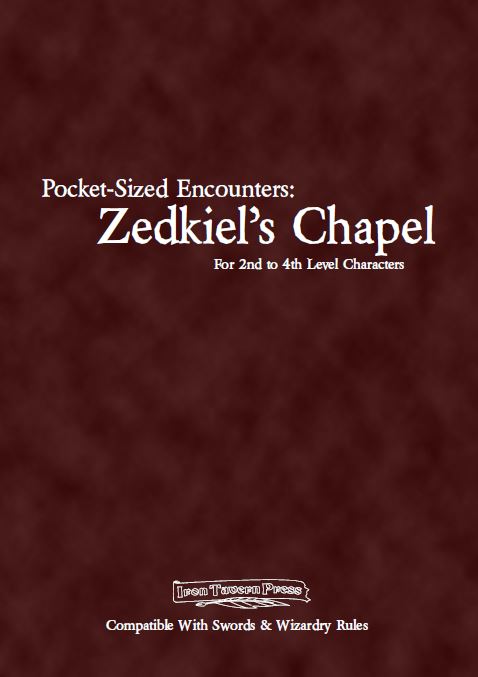 Skull Cave: Centuries ago nomads found a cave and felt drawn to perform their death rites to dark gods within its confines. Years of ritualistic offerings to malevolent forces has fed demons deep below the cave. The nomads have long since disappeared, but a recent earth tremor has freed the demon spawn from their prison deep below the surface. Seeking blood of victims to fuel their infernal fires they have moved closer to the surface and begun their hunt.

Zedkiel's Chapel:  Two brave adventurers rescued Zedkiel the scholar on his way home from the tavern. A large bat-like creature had attacked the man and certainly would have slain him had Ulad and Frango not intervened. A month later reports of another large bat-like creature surfaced as several townsfolk were killed one night under a full moon. Ulad and Frango grew suspicious and discovered something horrid had happened to Zedkiel. The man eluded them until the pair of adventurers discovered the strange abandoned chapel Zedkiel was using as a hideout. The characters have a choice to make - seek out and destroy Zedkiel or aid him against the vigilante townsfolk.

Check them out here!
Posted by ravencrowking at 15:21