In which I announce adventures that I think surpass the last five, but are still not quite to the five after.

Again, this is not a condemnation of any adventure out there, and I might have made different picks at another time.  Again, not including anything I wrote or converted to DCC. 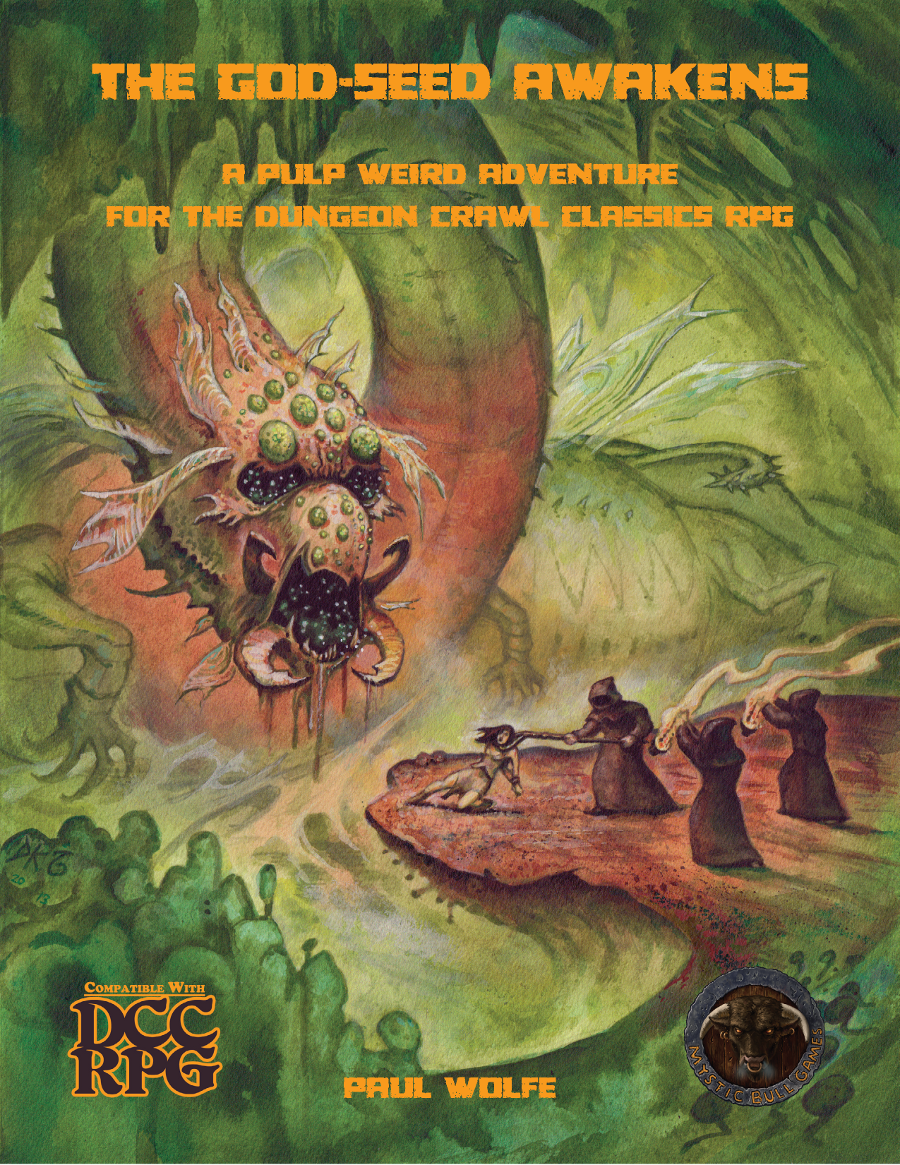 10. The God-Seed Awakens! (Paul Wolfe, Mystic Bull Games):  I think author Paul Wolfe's favourite Appendix N author must be Robert E. Howard, because there is always a bit of an REH vibe to anything that he writes. In this case, though, I am specifically reminded of Abram Merritt, because this is a dungeon crawl in which you will encounter weird creatures and alien cultures that you might well end up talking to rather than killing. Not that you will not end up fighting plenty of monsters - it's just that the monsters all have an understandable purpose, and that they do not all necessarily need to be fought. And, as in the best of the A. Merritt stories, the characters are drawn into a battle between powerful cosmic forces - potential patrons - that they may or may not understand.

Finally, this is not an adventure that needs to be played and then tossed away; it offers potentially persistent locations, and the action in the module could take place over many game sessions.  Although they are not made explicit, I can see a lot of potential hooks for patrons and deities sending their mortal associates into harm's way here. A wizard or elf could easily be forced to seek out the god-seed to find the last component of some spell she wishes to learn....


9. Intrigue at the Court of Chaos (Michael Curtis, Goodman Games):  A group of 1st level characters is summoned before the Court of Chaos to perform a small task. If that doesn't make you want to run (or play!) this adventure, then nothing else that I say will.  Suffice it to say that Michael Curtis was doomed to be on this list, and this is not the only time he will appear.

It's difficult to write about this adventure and not damage if by revealing spoilers. The best part of this module is created entirely by the actions of the players, and in setting up a situation in which the players (and their important decisions) get to become the clear focus, this adventure excels. If the location worked as well as the intrigue, this adventure would easily make it into the Top 5. And I do not mean that the location does not work; I just mean that it is not as strong as some of the works that follow...this may in fact be intentional on the part of the author, so as to not take focus away from those important player decisions I mentioned.

In any event, I had to really work to order the adventures, and had to make hard decisions about which is "better" than which.  Any criticism I have of any adventure that makes it to this list is mild indeed, and this is more to explain why this one did not place better.

There is a (probably unintentional) potential link between this adventure and my own The Falcate Idol, which I recommend exploiting for all its worth. 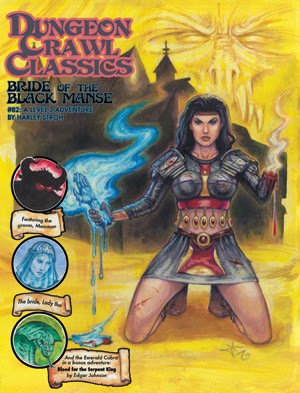 8. Bride of the Black Manse (Harley Stroh, Goodman Games):  Creepy, creepy, creepy. One of the best "horror" adventures ever written for a "Sword & Sorcery" type game. Harley Stroh's adventure is not, shall we say, for the faint of heart.  My players showed a surprising discretion, avoiding playing around with some of the moving parts (and lucky for them it was that they did so!), which prevented me from using some of the best material in this module. That's okay, though, because what they did get to was more than adequate.

This adventure, designed for convention games, uses a real-world time limit, which creates a sense of urgency in the players that a more leisurely crawl would never achieve. Also, there are two full-page illustrations herein that you should photocopy and use as player handouts. One handout, though, could use more explanation in the text. The judge would benefit from clear notes on how to deal with the personality traits listed on the family tree.This is a minor nitpick, but, again, I am forced to rely on minor nitpicks and slight variations in excellence in order to put these adventures into a list.

7. Doom of the Savage Kings (Harley Stroh, Goodman Games): The first mini-sandbox style adventure for Dungeon Crawl Classics, Doom of the Savage Kings has a single major threat, but that threat takes the PCs to a cool dungeon and forces them to deal with the politics of a remote settlement. Along the way they will make allies and enemies, and things will spin out of control more than once as the players drive the action.  There are some very cool treasures to be won, and one which the owner may eventually wish that he had left alone.

Having to deal with the same foe, over and over again, allows dread and fear to build, especially as these are mere 1st level characters trying to defeat a foe that is well beyond them. Figuring out what tools they need and how to get them fills the PC's days, and dread of the Hound fills their nights.

I wrote a bit more about this adventure here. 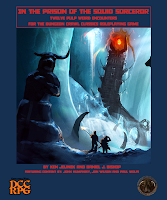 6. Another Man's Treasure (Ken Jelinek, Mystic Bull Games):  Found in In the Prison of the Squid Sorcerer, this is almost more of an encounter than a treasure, in that it can occur in conjunction with another adventure of any level as an added complication.  And a brutal complication it is. The adventure as written is short, but perfect, and writing more than this would damage the joy and consternation of your players.

I submitted two adventures to this compilation, but it is Ken Jelinek's submission here, of all that appears in the book, that I think is best.