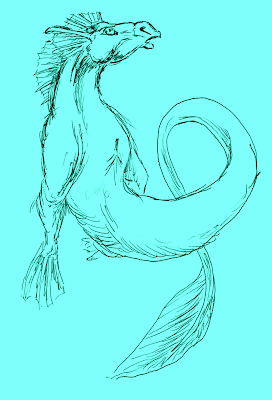 Yes, the creature's left arm came out pretty poorly, but this was only a doodle after all!

The poorly-drawn sea-horse is a hippocephalic proto-humanoid creature inhabiting the epipelagic to mesopelagic zones of the world's seas. Although intelligent, and generally good-willed, they are not tool-users. Both their environment and a lack of fine manipulative appendages has limited them in this regard.

Poorly-drawn sea-horses are sometimes seen cavorting around ships in the same way that dolphins and porpoises do. This is a good omen, and all aboard the ship gain an effective +1 bonus to their Luck for the duration of the voyage.

These poorly-drawn creatures speak the language of horses. They understand the speech of whales, and sometimes (1 in 7 chance) the languages of sailors passing through their seas. They know many secrets of the currents and tides, and of the shallower parts of the ocean. They know where islands might be found, and they know where ships lay wrecked, if those wrecks are not too deep.

Fully 1 in 7 poorly-drawn sea-horse is an accomplished magician, and knows 1d5 of the following spells (determined randomly):