Your Dizzy Burning Mind Only Tells You One Thing! 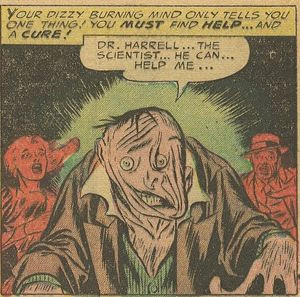 Morphic dissolution is a horrific condition caused by ingesting a difficult concoction of rare herbs and fungi, some of which are only found in the remotest of lands. In the (fantastic version of the) modern world, one would have to travel deep into Mammoth Caves, and then travel by canoe up hidden streams that feed the Orinoco River. Possibly, some of the compounds needed are only found in the steaming jungles of Venus or are contained in the fossilized remains of the polar lichens of Pluto.

In any event, once consumed, the unfortunate victim must make a DC 20 Fortitude save or take an immediate point of Strength, Stamina, or Agility damage as the victim's body becomes unstable. Thereafter, even if the initial saving throw is successful, every hour the victim must make an additional DC 10 Fortitude save or suffer 1d3 points of Strength, Agility, or Stamina damage. Determine randomly for each point. This damage is permanent unless restored by magic or super-science.

Once a victim has lost 6 total points from their physical ability scores, the warping of bone and tissue, and the plasticity of flesh, becomes obvious. Thereafter, the character loses 1 point of both Personality and Intelligence for each additional failed saving throw. This is in addition to continued loss of physical statistics, and is also permanent.

If a victim can make every required saving throw over a period of 24 hours, the process ceases, but is not reversed. Likewise, a Lay on Hands attempt sufficient to cure a poison can end the process, as can a neutralize poison or disease spell. Again, ending the effect does not reverse it.

If a victim reaches 0 Strength or 0 Stamina due to morphic dissolution, they immediately collapse into a primeval slime, as described on pages 423-424 of the core rulebook. 90% will be 1 HD slimes, but 10% (or larger victims, at the judge's discretion) may have 2 or more HD. Remember that morphic dissolution can effect much large creatures than mere humans!

In any event, you must find help...and a cure! But if you imagine that Dr. Harrell, the scientist, is going to help you, think again. He's probably the one who poisoned you in the first place...Revenge is one possible motive. Or Dr. Harrell might need a grateful, disfigured, servant around the place to hold his test tubes and tell him how brilliant he is.

For the judge: The threat of morphic dissolution is more powerful than the reality. If you are going to use this in an adventure, make sure that the magic or super-science needed to reverse it is also part of that adventure. Certainly, the PCs will be motivated, and they will understand soon enough that they are on a time limit!

And should it be the case that the evil Dr. Harrell poisoned them, and is using the threat of morphic dissolution to force the PCs to undertake some mission (by withholding the cure and the reversal agent), at least give the players the potential satisfaction of giving Dr. Harrell his comeuppance. For example, you might give them the chance to poison him and destroy the cure!