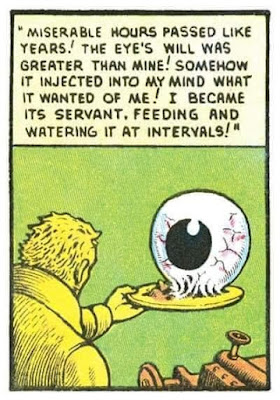 The disembodied eyeball of a titan, the Eye retains the life force and evil machinations of its former self. Where the titan has long crumbled to dust, and its very name is forgotten, the Eye endures!

The Eye dominates victims who meet its gaze, unless they succeed in a DC 25 Will save. Domination lasts for 1d5+2 hours, and the injunctions of the Eye always include returning to it, and gazing upon it, before three hours have passed. A creature dominated by the Eye must carry out the Eye's injunctions to the best of its ability; failure to do so causes a permanent loss of 1d3 points of Personality every 10 minutes. The judge determines whether or not a victim is following the Eye's injunctions, and the judge's determination is final! Trying to circumvent what the Eye wants once it has dominated you drains your very soul.

The Eye can do little by itself. It is tough and fibrous, but not very powerful physically. Unfortunately, it is usually protected by dominated minions.

The Eye can feed through an aperture at its base, and moves using the short tentacles that surround it.

Injunctions of the Eye

1. "Carry me to another location on a small platter!"

4. "Bring another being before me, and make them meet my gaze!"

5. "Destroy a specific being that has been released from my domination!"

6. "Find me a giant body to dwell in!" (Presumably, the Eye could worm its nerve-tentacles into the body's brain and control it.)

7. "Perform some specific mission against my enemies/to increase my security!"

Frankly, the goals of the Eye are fairly pedestrian. Of course, it is just an Eye. What use has it for gold or Earthly pleasures? Things might change, of course, if it actually obtains a body....