Because I was asked recently about non-DCC adventures I thought were worthy of conversion to Dungeon Crawl Classics, I thought I would post about it. I have already posted about personal conversions of The Albuquerque Starport from Gamma World, Anomalous Subsurface Environment (including Moktars and Insect Men classes for DCC, Barrowmaze, Stonehell, and Skull Mountain. I have mentioned conversions of classic TSR modules like Eye of the Serpent and Sinister Secret of Saltmarsh. I think that anything can be converted to Dungeon Crawl Classics, and the early TSR modules are prime candidates.

I also think that scenarios written for games like MERP or Stormbringer make excellent choices, because almost by definition they are going to drip Appendix N goodness. Bree with the serial numbers filed off makes a good setting for Nebin Pendlebrook's Perilous Pantry.

But let's make this a sale's pitch. Here are 4 current products that I would love to convert to Dungeon Crawl Classics. Feel free to contact the publishers and point them to this blog post! Also, consider getting these adventures and doing your own conversions if they do not!

In no particular order:

The Temple of the Blood Moth 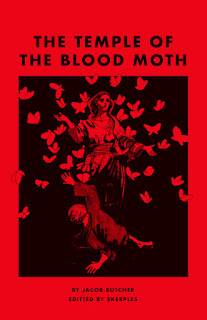 Authors Jacob Butcher and Skerples deliver a wonderful and nasty little adventure in zine format. The original adventure is system-neutral, but refers to creatures that are not included in DCC's core rules. Enough information is provided that an experienced judge can easily fill in the gaps/
The adventure revolves around the titular temple, and includes both elements of magic and super-science, which should be enough to warm the heart of any DCC judge. And blood moths. And an attempt to genetically engineer angels.
A full DCC conversion would be longer than the original, because there is plenty of material herein to base a new patron on. Since the adventure also deals with mutations - more akin to corruption that Mutant Crawl Classics mutations - the judge could certainly gain some new tools to play with!
The publisher is Abrasax Press.
You can get it here! 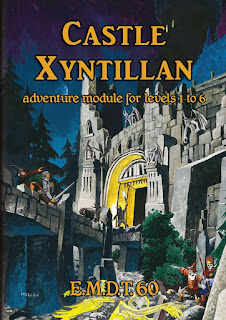 Written by Gabor Lux and published by the First Hungarian d20 Society, Castle Xyntillan is an extensive love letter to Tegel Manor and old-school gaming. Oh, and to Clark Ashton Smith's Averoigne stories. This is a large manor, with dungeons beneath, and it is not going to be explored in a single evening. Like the "campaign dungeon" of yore, this is a location that many sessions of play will revolve around. PCs are likely to plan expeditions, go off to do other things, and then come back. Their actions will, of course, affect the setting and how the castle's inhabitants view/treat them.

In addition to fun encounters and some unique inhabitants, a full DCC conversion would include the Malévol family itself as a patron...one that could survive, perhaps, until the very last member of the family is both dead and laid to rest! It would be even better to start with a funnel that reveals one or more PCs to be distant relatives of the Malévols...giving them a reason to "reclaim" the castle from its current occupants, and resulting in some interesting role-playing opportunities both in the castle itself and in nearby Tours-en-Savoy.

The original was written for Swords & Wizardry. There is a lot of material, so until you are ready to run a game converting on the fly, you may wish to take copious notes before play begins. The PCs have a lot of leeway to explore the area, so you will want to make sure you have a fairly comprehensive idea of how you will do the conversion before introducing the setting.

Misty Isles of the Eld 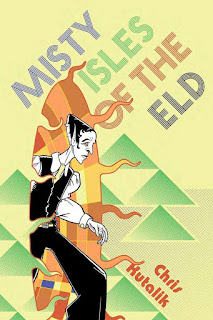 Written by Chris Kutalik and Robert Parker for Hydra Cooperative, this adventure uses the Labyrinth Lord rules, and is linked to the Slumbering Ursine Dunes, Fever-Dreaming Marlinko, etc. - all products which rock as they are and would rock even harder using Dungeon Crawl Classics as an engine!

This particular adventure has a warped and wonderful take on elves. Well, on the Eld. It delivers pure Appendix N-style goodness, and the adventure includes even trying to get to the titular islands. The action on the isles is a point-crawl where the actions taken by the PCs can affect later encounters.

Did I mention that there are extra-planar elements as well?

If you are doing a home conversion, consider the possibilities for new spells and patrons that the Misty Isles provides as you read through it. Consider how the existing DCC rules could be used to enhance any attempt to voyage to the isles. Decide whether or not you want the Eld to be represented by elves, or if you want an entirely new race-class to describe them. It is possible to do a low-effort conversion if you want, but this would really be cool with a full conversion. Especially if it included the material from the related titles. 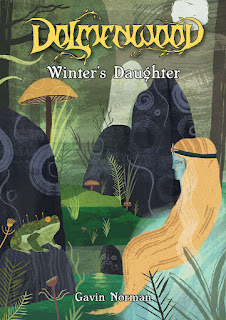 Written by Gavin Norman, Frederick Münch, and Nicholas Montegriffo for Necrotic Gnome, this adventure already has a conversion to 5th Edition D&D by the talented Thilo Graf. It is written for BECMI, and hooks into the Dolmenwood setting.

Everything written for Dolmenwood should be converted to Dungeon Crawl Classics. Everything. And you should be able to get a big shiny hardcover printed on demand. New monsters, races, classes, patrons, the whole nine yards. There is not a single word written for this milieu that would not be awesome in a DCC game.

In this particular case, you have a dungeon to explore, another plane, strange fungi to consume, and a potential patron waiting to be written up. There is also an exploration of the fey that is really sort of awesome - Dolmenwood has, perhaps, the most flavorful version of that realm currently out there.

If you are a DCC RPG judge looking for some cool stuff, I hope this points you in the right direction. If you publish one of these products, and are interested in talking about doing a conversion, drop me a line!