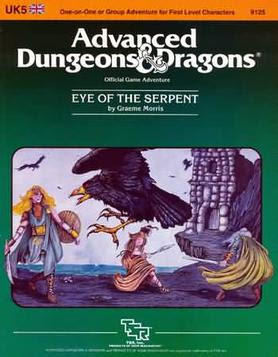 My weekly Dungeon Crawl Classics game was switched from Thursday to Tuesday to accommodate a player who, once more, didn’t make it to this week’s game.  Hmmm.  On the other hand, Tuesday also accommodates his roommate, Phil, who is a really great addition to the game.

After finishing off one of the mini-scenarios for In the Prison of the Squid Sorcerer, we introduced Phil’s new party of four 0-level characters.  It is a testament to the strength of the DCC system, by the way, that 0-level characters can contribute to an adventure in a fun way, while other characters in the same adventure are reaching 2nd level.

The group joined a caravan headed east, and then found themselves attacked and carried aloft by a pair of rocs.  (Some funny confusion/conversation about “rocks” and “rocs” ensued.)  The group was deposited in a nest atop Hardway Mountain, and the rocs flew off.

Some of you may be familiar with UK5: Eye of the Serpent, and can envision the module given a DCC twist.  It is remarkable how easy it is to convert the old TSR modules – generally, it involves flipping the AC, deciding what attack bonuses and saves should be applicable, and in the case of some monsters, upping hit points.  In this case, a +10 hp bonus is generally sufficient when needed.

The highlight of the game was when the characters found a glowing egg guarded by an ice demon.  First off, when the demon was killed/shattered, one of the PCs decided to collect some of the ice shards in a vial.  You never know when demon water might be useful….and, in DCC, it actually might be!  The freezing PCs dragged the egg out of the pool that was keeping it cool (and thus preventing its hatching).  The egg, being warm, gave them a chance to heat up….but it also hatched out a creature they first thought was a dragon.

Now, in the module, if this creature hatches, it immediately attacks.  But DCC has a strong vibe of letting the PCs try crazy things right from the get-go.  And, naturally, one PC attempts to befriend the creature by feeding it.  It eats six days’ worth of rations, and some canned meat, and nearly doubles its size.  The creature is described as having insect-like compound eyes (they cannot tell easily what it is thinking) and wings that form a cobra-like hood around its head when upset, rather than allowing flight.  There are several rolls to train this thing, all of which (through rolling or spending Luck) are very high.  Sometimes it pays to have a “halfling keeper of the hounds” in the party!

At the same time, as the evening winds down, they discover that the creature dislikes heat, that its back can now glow cherry-red from its own internal heat, and that they are not altogether certain how this strange alliance will end.

Fun times.  What a great game DCC is!

A COUPLE OF EDITS:

(1) Lots of fun with folks jumping into icy water to attempt to recover treasure.  I made use of Fort saves to avoid temporary Stamina damage, both from normal exposure, and moreso from leaping in the water.  The bonfire-like heat of the hatchling mentioned above was used to remove these penalties.  The basic set of DCs (5/10/15/20) works amazingly well for quick adjudication.

(3) Based on the idea that you should avoid railroading players, I let them know upfront that the rocs were a set-up; they would not be instantly killed.  I could have run this differently, but I thought that the players would enjoy the adventure, despite the inherent railroadiness of its set-up.  So far, this has proved to be an accurate prediction!