Everyone Else X: Sepulcher of the Mountain God 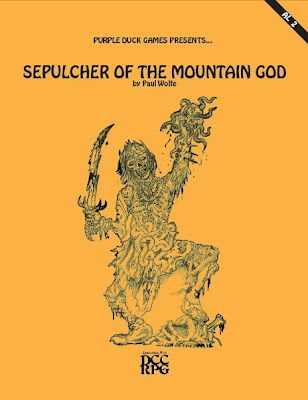 Paul Wolfe’s Sepulcher of the Mountain God was the second of the Dungeon Crawl Classics AL Series of adventures for Purple Duck Games, and (I believe) Paul’s first published adventure.

Now, this is one that I have a hard time writing about for a few reasons.  First off, I playtested it.  Second off, I helped with the editing.  Third off, I have been involved with Paul on other projects, such as In the Prison of the Squid Sorcerer and Angels, Daemons, & Beings Between.  Finally, I have been involved with the publisher on other projects, such as Bone Hoard of the Dancing Horror and Through the Cotillion of Hours.

So, I have some slight bias.  And by "slight", I obviously mean "quite large" or even "too large to fairly review".

Finally, if you are like me, you find yourself needing more 1st level materials for Dungeon Crawl Classics as you lead various groups through various 0-level funnels.  In a persistent game world, you don’t want to simply re-use the same adventure multiple times.  Having more low-level material is definitely a boon.