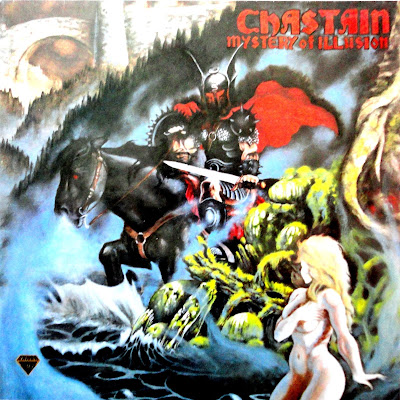 The next album cover on my queue is Chastain's Mystery of Illusion. And, yes, that last link will take you to the full album.
Although released in 1985, that cover looks like something from the 1970s Heavy Metal Magazine. Nude woman. Evil looking dude on an evil looking horse. Hazy background like something from a Ralph Bakshi film. You would have, at most, three statblocks of material here, and the woman looks more like victim than active entity.
Luckily, when I stat out these album covers, I also like to take the lyrics into account if I can.
Herein, we have the tale of a sorceress queen, who seeks to kill the king and take his place. She sees a soldier of fortune, the black knight, as the tool she needs to accomplish this end, and sets him against the king.
In return, the queen becomes his consort. The knight, believing that she will be loyal to him, allows her to cloak him in illusion, freeing him to become the tyrant through which she acts. In the end, though, the soldier of fortune escapes, leaving the queen desolate in the ruins of her kingdom.

In the end, Vauquelin leaves mind freed, no longer enslaved by magic, riding with the winds of change.

Queen Isabeau's Luck keeps going down because she is avoiding corruption. Even without having written specific patron taint (etc.) for her patron, the fact is that either a wizard's Luck is going to run out sooner or later, or the character is going to take corruption. The speed at which a wizard experiences mind- and body-wrenching change is going to vary, based on the dice and how often you give them a chance to replenish their Luck.

Final note: There is a reason why I picked this tale of tragic loss and malformed relationships: