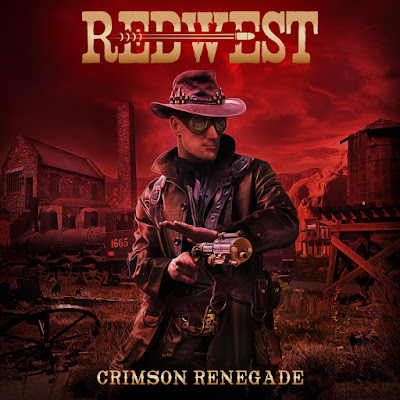 In honor of Weird Frontiers, I have selected Redwest's Crimson Renegade as the next album cover to give the "Raven Crowking DCC" treatment to.
In this case, we have the titular gunman, those goggles, and that machine pistol to stat out. Also, why has the sky turned completely red? I am sure we can come up with some sort of half-baked but fun answer!
The Crimson Renegade
A legend along the Weird Frontiers of the West, the Crimson Renegade is said to be a fallen angel, a demon from the dark side of Paradise, walking the world in mortal form. Some say that the Crimson Renegade, sickened by the horrors of the Seven Days of Night, tried to leave the Path of the Damned and walk the Path of the Righteous.
How successful that change of paths has been depends greatly upon who you ask. Violence follows the Crimson Renegade wherever he goes. Behind his angelic features is a soul drenched in whiskey, gambling, the pleasures of the flesh, and a river of spilled blood. If your hombres meet him, prepare for Hell itself to join in the dance.
The Crimson Renegade: Init +7; Atk bowie knife +4 melee (1d6) or machine pistol +6 ranged (1d8); AC 19; HD 5d10+10; hp 55; MV 30’; Act 1d20; SP immune to fear/madness, healing, dead speak, side-step, death throes; SV Fort +5, Ref +7, Will +4; AL POD +2. Crit Die d12; Fumble Die d8.
The Crimson Renegade is immune to all fear and madness effects, and never needs to make a Grit Check.
He can heal others with a touch, but only by taking their wounds upon himself. Each round he can heal 1d8 damage to a single living creature, but then takes that damage (and identical wounds) upon himself. He can cure poisons, diseases, broken bones, and paralysis by remaining in contact for a longer period, but likewise takes those conditions on himself by doing so.
The Crimson Renegade can speak to the dead as can a Calavera.
He can also side-step in a manner similar to that of a Sin Eater but at much higher cost. Instead of Personality damage, attempting to enter the spirit world causes the Crimson Renegade to weep blood. The Crimson Renegade makes his attempt with a +8 bonus to his d20, but takes damage equal to the total of the roll, whether it succeeds or not.
When the Crimson Renegade dies, his death throes depend upon what he was doing at the time. Either a shaft of light pierces the clouds, giving him a look of peace as he fades away, or the earth swallows him to the sounds of malicious laughter and cries of pain coming up from below. The judge should decide depending upon circumstances, or just determine randomly. What do you believe in more, Redemption or Punishment?
McTinker's Goggles
Let's say you catch the Crimson Renegade in a talkative mood, and you ask him where he got those fancy spectacles from. He might just tell you about a Bedlamite called McTinker. Or he might tell you some other tall tale because, truth be told, McTinker sounds like a lie, doesn't it?
Either way, the wearer of the Goggles can stare at the sun unblinking, or count the spots on a bluebottle's arse across a smoky saloon. By which I mean to say, nothing stays hidden from the wearer  of these Goggles and trying to hide will do you little good. If you're lucky, they might even stick around when the Renegade dies, instead of being caught up in his death throes.
The Machine Pistol
This beauty isn't even magical, just a thing stuck in this world way before its time. The machine pistol takes .36 ammo with a 20 shot load and a 6 shot rate of fire. It does 1d8 damage with a range of 15/50/80. There is a -1d penalty to concealment, and the weapon is beyond price. Although you can't fan the hammer with this weapon, for some reason the Crimson Renegade likes to pretend that you can. I mean, look at him in that picture; that ain't no single-action weapon!
The machine pistol takes 5 full rounds to reload. If damaged, a Bedlamite might be able to repair it. Hell, a Bedlamite might even be able to reproduce it, or something near enough, but the judge should set the cost and complexity DC high.
The Red Sky
There's an old rhyme that says
Red sky at night, sailors delight
Red sky in morning, sailors take warning
A little less well known is the third line
Red sky at noon, Death coming soon
When the sky looks like it is awash with blood, even under the noonday sun, that is a sure sign that something unnatural is walking the earth. The judge can feel free to introduce any adventure they want, and maybe this is the time for something especially wicked.
Saddle up.
You can listen to the full album here.
Posted by ravencrowking at 20:26