The Inn in the Forest! 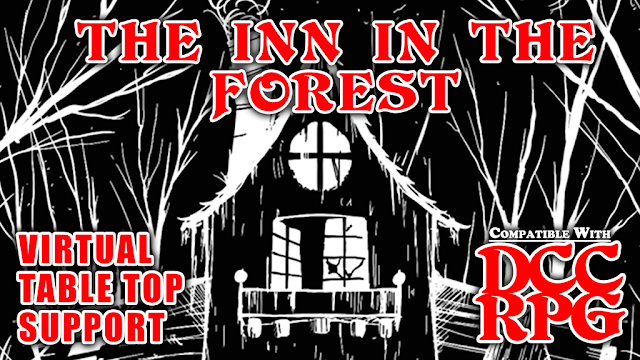 From the mind of Daniel J. Bishop comes a dangerous adventure that pits players against monsters, nature, and even time itself.

You spy a semi-ruined inn on the road ahead, promising shelter from the dark woods that close in around you. But the inn is not deserted. Haunted by phantoms of the past, creatures of the present, and a malignant entity with dark designs for the future, you slip between all three timelines. As these timelines merge and horrors from the past slip into the present, you find yourself confronted by a dark and wild future that you may not be able to avoid. Worse, a future you may have helped to create!

The Kickstarter has now officially launched!

What is The Inn in the Forest?

The Inn in the Forest is a DCC RPG long-format, time-traveling, horror adventure by Daniel J. Bishop heavily influenced by the darker side of the Brothers Grimm, the moody ghost tales of M.R. James and William Hope Hodgson, and the horror stories of Robert E. Howard.

Providing multiple nights of eerie entertainment as a stand-alone adventure or as a persistent part of a larger campaign, The Inn in the Forest is perfect for any medieval or modern DCC or OSR setting, including Weird Frontiers, Shudder Mountains, Crawlthulu, OSRIC, and Labyrinth Lord.

As a player, you take the part of an unwitting traveler seeking shelter for the night. Whether drawn this direction to search for the lost magic of Zauberer the Hexmaster or following up on rumors of the innkeeper’s dark practices, what you encounter is so much worse. Sometimes making it to dawn means success, other times it may just mean trading your companions’ souls to gain the power the Waldgeist grants!

As a Judge, you will be running a unique adventure, where time is not static. Phantom shifts allow you to tell the story of the inn during its heyday as well its current state. As the PCs interact with the haunting of the inn’s past, the very real threats of its present seek to destroy them. Rules on phantom shifts, as well as new monsters, items, artifacts, and rituals, are included to bring new dimensions of gameplay to your ttrpg.