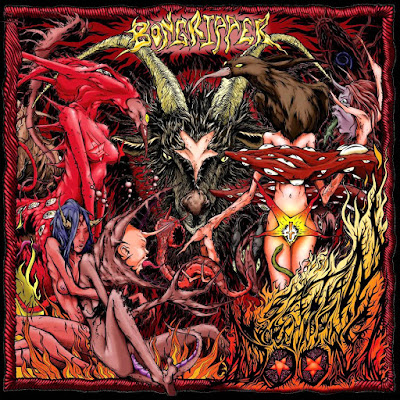 I am doing this album cover next at the request of Wayne Snyder, via Google+. There are a few creatures on this album cover, and more demons are always useful to the beleaguered judge, so here we go!

As a side note, the demon generator at Purple Sorcerer was used to help generate base statistics that I then adjusted to match the cover art.

This potent demon has power over a legion of seventy-two lesser demons. It appears as a giant (20' tall) goat-headed man with a patch of bare flesh shaped somewhat like an upside-down star on its forehead. Baal Zymymar gives off an offensive smell, not unlike that of a great goat, but muskier and strangely disturbing to those who smell it. The demon can communicate telepathically, or speak in any known tongue.

Summoning Baal Zymymar for any occasion except the most important is fraught with peril, for this demon is vain, has a long memory, and has an entourage which can be sent to punish the presumptuous. However, as a demi-patron, it is possible for wizards and elves to call upon Baal Zymymar to power their spells. When a wizard calls upon Baal Zymymar for spellburn, roll 1d4 + spell level + Luck modifier and consult the table below:

0 or less - You dare disturb Baal Zymymar with so feeble a request? The caster immediately suffers 2d12 damage and must succeed in a DC 15 Will save or die. No spellburn is granted.

1 - Baal Zymymar is not amused by your request. The caster immediately suffers 2d6 damage and must succeed in a DC 10 Will save or be knocked unconscious for 2d5 days. No spellburn is granted.

2 - Baal Zymymar is not amused by your request. The caster immediately suffers 2d3 damage and must succeed in a DC 5 Will save or be knocked unconscious for 2d5 rounds. No spellburn is granted.

3 - Baal Zymymar is not interested in your plea. The caster is not punished, but neither is spellburn granted.

4 - A cloud of biting flies surrounds the caster, crawling over his flesh, up his nostrils, into his eyes, and into his clothing. This is expressed as Strength, Agility, or Stamina loss. The caster may gain a maximum of 6 points of spellburn. The vermin leave as the spellburn damage is healed, and the damage heals at half the normal rate. Finally, the caster now owes a service to Baal Zymymar, and the demon will collect regardless of the wishes of the caster.

5 - A cloud of biting flies surrounds the caster, crawling over his flesh, up his nostrils, into his eyes, and into his clothing. This is expressed as Strength, Agility, or Stamina loss. The caster may gain a maximum of 10 points of spellburn. The vermin leave as the spellburn damage is healed, and the caster now owes a service to Baal Zymymar, and the demon will collect regardless of the wishes of the caster.

6 - A cloud of biting flies surrounds the caster, crawling over his flesh, up his nostrils, into his eyes, and into his clothing. This is expressed as Strength, Agility, or Stamina loss. The vermin leave as the spellburn damage is healed.

7 - The caster feels a portion of his soul being sliced away, where it is stored by Baal Zymymar in his palace in Hell. Spellburn is expressed as Strength, Agility, or Stamina loss. As the caster recovers, he becomes accustomed to the loss of part of his soul, but that part is never truly restored unless the caster journeys to Hell itself, seeks it out, and frees it from its bondage. From this day forward, the caster will sometimes dream of his soul's bondage in hell.

8 - A gaping wound in the shape of an inverted star appears on the caster's forehead. Spellburn is expressed as Strength, Agility, Stamina, or Personality loss. The wound heals as this damage is recovered, but it forever leaves a visible scar. This scar is identifiable as the mark of Baal Zymymar by demons, and may be recognized by wizards, priests, sages, and others at the judge's discretion.

9 - The power of Baal Zymymar infuses the caster, leaving him with a goaty reek that is disturbing to those who encounter it. The caster may spellburn as normal, but can take points off Personality as well as Strength, Agility, and Stamina. Moreover, for each point taken from another ability score, one must be taken from Personality. I.e., at least half of all the spellburn must come from Personality. This damage heals as normal, but damage to other attributes must be healed before Personality damage can be restored. As the Personality damage heals, the reek fades, until it finally disappears.

10 - Wild Bacchanal: The caster may have up to 10 points of spellburn at no immediate cost. However, every night thereafter (up to the number of nights equal to spellburn granted), the caster is plunged into a wild orgiastic rites of Baal Zymymar in his dreams, and gets no benefits from rest. I.e., the caster does not heal damage and does not regain lost spells. The caster may become the unwitting parent of a half-demon child at the judge's discretion. Female casters do not become pregnant themselves in this case; the child is carried in a surrogate womb provided by a succubus in Baal Zymymar's entourage.

11 - An offer you cannot refuse: The caster may have up to 10 points in spellburn without immediate cost, but there is a task that Baal Zymymar wishes completed within 1d30 days. If the task is not completed by that time, the caster takes 1d7 points of damage per point of spelburn gained - the cost of Baal Zymymar's displeasure.

12 or higher - This great work is pleasing to Baal Zymymar's vanity. The caster gains 10 points of spellburn without cost, but is marked somewhere upon his body with the sign of the inverted star. From this point forward, the caster rolls 1d5 rather than 1d4 on this table, but for all future spellburn requests (regardless of the result), the caster owes a favor to the demon that Baal Zymymar will make use of. If the spellburn result indicates that the caster owes Baal Zymymar a favor, this is an additional favor owed. If this result is rolled again, the die used by the caster continues up the dice chain to a maximum result of 1d8.

The Entourage of Baal Zymymar

Lillit has the ability to appear as a beautiful woman, but her true form has a raptor-like bird's head and torso erupting from her shoulders, and her hands and feet are the claws of enormous  predatory owls. In woman's form, her touch can cause paralysis (as a claw attack), but does no other damage. She seduces men for their seed, which is of value in Hell. She can speak all languages and communicate telepathically.

There are those who claim that Lillit was the consort of the first mortal man, bringing him equal parts terror and pleasure, before being banished to Hell.

Vanth is a bright red female demon with features that are semi-insectile and semi-chthonic. She is covered in spikes that cause 1d8 damage to any who attack her with melee weapons unless a Reflex save (DC 18) succeeds. Vanth has a bird's head emerging from her mouth; it is this which speaks when she chooses to communicate in that way. Otherwise, she can communicate telepathically.

Despite her fearsome appearance, Vanth can be summoned by wizards and elves seeking a guide in the Underworld. In this role, she acts as a pychopomp, meeting the dead and escorting them to their designated place thereafter. In the role of guide for the dead or living through the Underword, she may even be seen as benevolent despite her fearsome appearance.

This demon promotes cannibalism and disease. Anyone subjected to any successful attack she makes must succeed in a Fort save or suffer 1d3 points of temporary attribute damage to Strength, Agility, or Stamia (determine which randomly each time this damage is taken). If the initial save fails, a new save must be attempted each day, or additional damage is taken. Once a save succeeds, the disease has run its course.

This demon appears as a scrawny woman with red skin and prominent horns.

Rangdayak (Type 2 demon): Init +4; Atk claw +7 melee (1d10+3 plus drain XP) or breath weapon; AC 13; HD 7d12; MV 40’; Act 2d20; SP infravision 60', demon traits, drain XP (Will save 14 or lose 1d6 XP; this loss cannot alter the PC's current level, but must be regained in order to progress), breath weapon (cloud of madness, 30' diameter, up to 30' away; all within must succeed on a DC 14 Will save or attack nearest creature until a save succeeds [a new attempt is allowed each round]), immunities (immune to non-magical weapons or natural attacks from creatures of 3 HD or less; half-damage from fire, acid, cold, electricity, gas), projection (can teleport back to native plane or any point on same plane, as long as not bound or otherwise summoned), read minds, crit range 19-20, darkness (+8 to spell check); SV Fort +5, Ref +5, Will +4; AL C.

Rangdayak appears as a lizard-like woman, whose open fanged maw reveals the head of a demonic baby which is her true visage. A tail grows where her genetalia would otherwise be.

Like Suanggi, Rangdayak promotes cannibalism, but she specifically promotes the consumption of infants. She is a friend to witches, and can grant any witch a +1d6 bonus to a spell check one time between full moons (once a month), in exchange for which she requires some action be fulfilled that reflects her nature. If the witch fails to keep her part of the bargain, the judge may choose any two spells during the next month, and apply a -1d6 penalty to their spell checks.

It is often left to the witch herself to ensure that she has done enough to "pay back" the magic loaned to her by Rangdayak. In general, the higher the bonus gained, the more that must be done to balance the scales. If the judge is in doubt, a Luck check can be used to determine whether or not Rangdayak accepts the repayment.

(Within this context, the judge must determine exactly which characters qualify as a "witch". Generally, Chaotic female wizards and elves qualify, but some settings, such as Tales From the Fallen Empire or Hubris, may have classes that the judge wishes to restrict Rangdayak's favor to. The judge is always right.)

These are scarlet, worm-like proto-demons, created from the souls of those whose afterlife merits such treatment. They can speak the Infernal tongue and the common language they knew in life, but cannot travel the planes of their own volition. Greater larvae have a sulfuric stench that mortals find repulsive, but which many demons treat as an aphrodisiac.

Lesser daemonic larvae can be encountered in Curse of Mistwood, published by Shinobi 27 Games.