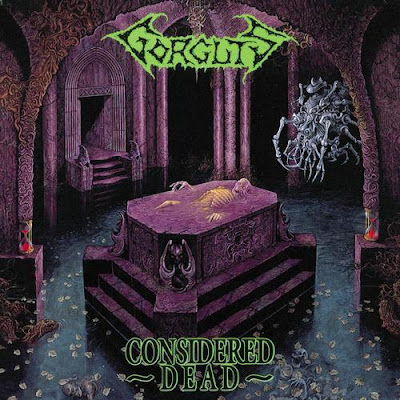 In Canada, there are laws prescribing how much content on the radio or television must be Canadian. Love it or hate it, it means that Canadians have a chance to prosper in the arts.

Now, I have started this particular entry so many times, only to have the file disappear into the electronic ether, that one might think the Dungeon Crawl Classics write-up for this album cover itself should be "Considered Dead", but that isn't what is going to happen.

The Chamber of Cold Burial

Lost within a lethal underground maze is a chamber whose floor is made of ice. The ice floor is at least 30 feet deep, but can be traversed without slipping if the walker is careful. Walking at more than have speed requires a DC 5 Reflex save to avoid falling; this is DC 10 during any round when a character engages in combat, and DC 15 if a character runs.

Close examination of the floor can reveal this hazard, as there are skeletal remains wholly or partially embedded in the chamber's floor.

The Altar of Woeful Consumption

Rising from the floor of the Chamber of Cold Burial is a stone altar. A Chaotic spellcaster, succeeding in a DC 20 spell check, can "feed" a victim to this altar, causing the victim to become embedded in the stone as its body rots away.

The victim gains a single Will save (DC equal to spell check to resist), being otherwise helpless unless rescued. Spells such as dispel magic or remove curse, if they exceed the original spell check, are effective, as is divine intervention. Otherwise, each round the victim takes 1d3 damage to Strength, Agility, and Stamina each hour until dead. The sacrificing wizard, elf, or cleric can access half of these points to use as spellburn with no other repercussions to the caster; the other half of these points are lost. The altar automatically loses one point of available spellburn each day, and must therefore be continually fed to be of value.

Victims who die in this manner are lost for eternity, and cannot be brought back by any means.

There are several of these items believed to exist. Each is an hourglass whose "sand" is made of "grains" of crystallized blood, culled from some alien entities which experience the flow of time differently than do mortal men.

It is believed that at least two such hourglasses are possessed by the current Keeper of the Altar of Woeful Consumption. They are said to be used to maintain the available spellburn contained by the Chaos altar, so that one available point is lost every 100 days instead of every day.

A sanguine hourglass is nonetheless fragile, and any hit against AC 12 that does 2 hp or more damage can shatter it. The effects of a shattered sanguine hourglass end immediately, but any creature within 100' must roll 1d7 + Luck modifier:

This monster is known to inhabit the lethal maze wherein the Altar of Woeful Consumption is found. It appears to be a grey-white almost spidery thing, with sharp appendages and sensory apparatus placed at irregular intervals. It does not walk, but flies slowly about, and is thus immune to the dangers of the icy floor in the Chamber of Cold Burial. One pulpy fungal knob on its upper surface bears an absurd resemblance to a man's head wearing a fedora, which may hint at the creature's origin. It gives off a rancid smell like rotting shredded flesh.

The drifting remains attempt to pierce victims with their many sharp limbs. If two or more limbs succeed in striking the same victim, the remains may hold on (Strength DC 10 + number of limbs attached to break free). While holding a creature, the remains may attempt to use its ovipositer to infect the being with its young.

It takes 1d3 days for the young to hatch as crawling maggots, during which time it is possible to treat the infestation as a disease. For instance, a cleric can attempt to lay hands, or to cast neutralize poison or disease. After this time, things become far more dire.