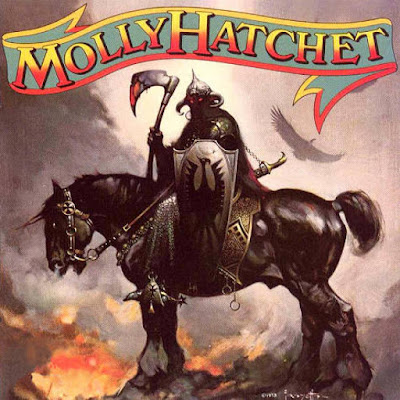 Heavy metal album covers have inspired gamers for decades, and have certainly influenced Dungeon Crawl Classics. Nothing is more obviously influenced than Metal Gods of Ur-Hadad, but it has been a while since the last issue of that worthy zine has come out.

What are we to do in the meantime?

The answer is obvious. Stat some things up using album covers as our inspiration. Therefore, without further ado, I present to you:

The Death Dealer is an un-dead reaver mounted on a great black warhorse. His eyes glow red, but no visage can be seen beneath his horned helmet. He gains a d7 Deed Die (as a warrior) and uses 1d24 on Table V for critical hits, with a threat range of 18-20.He has the power to control any horse he rides by force of will alone. He can make a ranged attack up to 60' away with the force of his gaze. This causes 1d6 damage (Deed Die does not apply), and the target of a successful attack must succeed in a DC 15 Will save or be unable to act for 1 round.

The Death Dealer wears cursed half-plate armor. Anyone who dies while wearing this armor arises 1d5 rounds later as the new Death Dealer. However, the Fumble Die for the cursed armor is only 1d12.

A warhorse controlled by the Death Dealer gains +4 hp and a +4 bonus to Will saves.