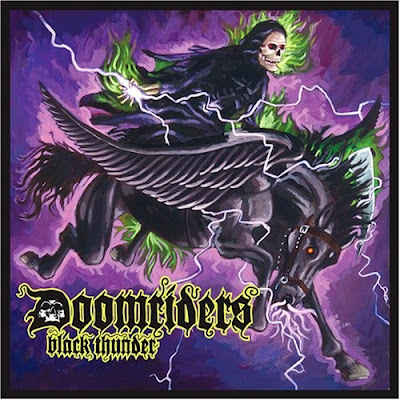 Doomsayer has left a few album cover requests, but before I get to those, here is something a little easier to close the year with.

It is well known that the Valkyries, beautiful warrior women riding winged horses, come to bring the worthy fallen warriors to Valhalla (all shiny and chrome). For those who worship Whaaar! across the wasted landscape of Umerica, a different fate awaits the warrior without heart, who flees battle, or who dishonors himself or honorable adversaries with cowardly attacks or unwarranted mercy.

Doomriders are sent by Whaaar! to slay those who turn their backs to their foes, or otherwise dishonor the Umerican god of conflict. Certainly not every cowardly act results in one or more doomriders being dispatched, but equally certainly, any such act may result in the same. The chance for doomriders to appear to 0-level characters and lowly (unnamed) NPCs remains at the judge's discretion. Otherwise, when a character dedicated to Whaaar! acts against his tenants (see The Umerican Survival Guide for details) on the battlefield, roll 1d30. If the result is equal to or less than the character's level, at least one doomrider appears. For every 2 points below the character's level, an additional doomrider is dispatched.

When one or more doomriders appear, the sky turns black and rolls with thunder. Doomriders are wreathed in green flames that do an automatic 1d3 damage to anyone striking them with a melee weapon. These flames also add damage to their claw attacks (already calculated into their statblocks). A doomrider can harness lightning, making a ranged attack with a lightning bolt once every three rounds. This attack has "exploding damage" - every time a natural "6" is rolled, add another d6 to the damage. If this die also comes up "6", another d6 is added. And so on.

If either a doomrider or its steed is slain, its counterpart continues attacking. When slain, either will simply fade from existence, to be reborn in the feasthalls or stables of Whaaar! If both doomrider and steed survive combat, they take their targets bodily to the Hell designated by their god. Otherwise, they simply fade away. It is considered a great honor to be selected as a doomrider after a glorious death, and a doomrider may pause to speak to one-time companions before departing.

Note: If not using The Umerican Survival Guide, increase the steed AC by 2 and ignore Armor Die. Although I tied the write-up to the Umerican deity, Whaaar!, feel free to replace with any other god of war appropriate to your campaign. Remember that the alignment of both doomriders and their steeds should match that of the god....and not all war gods need be Chaotic!
Posted by ravencrowking at 09:54