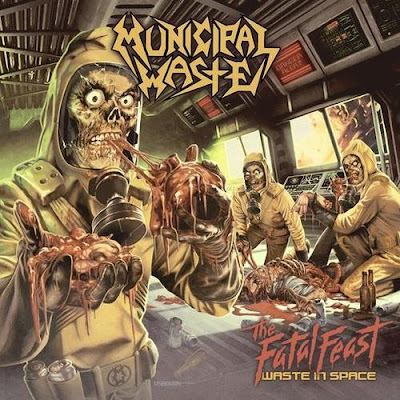 The official music video takes place on Waste Station 3M-TA3, lost in space 17 years. Needless to say, the scenario could work in a sealed facility on the post-Apocalyptic world just as easily. Or you could have your PCs transferred somehow to an orbital facility.

Hazardous waste laws are written for a reason. A breach in protocol at Waste Station 3M-TA3 allowed the unintended release of Virus TFRW-2012-SA05, nicknamed "The Fatal Feast".

There are three stages to this virus's infection cycle, and the PCs may encounter it in whatever stage the judge desires. It is entirely possible that the three stages are going on in different parts of the same complex.

Fort DC 15 resists infection. Those infected gain a +4 bonus to all Strength-related checks (including melee attack and damage rolls). They suffer an irresistible desire to consume non-infected living creatures. At the judge's discretion, a desire to use spinal columns to play air guitar, or use a length of intestines as a microphone, may also develop.

Infection is caused by direct contact with the virus, or by contact with an infected creature. Stage One typically lasts for 1d5 days.

Fort DC 20 negates. Uninfected living flesh which fails the Fort save is turned to blood at an astounding rate. Exposed beings who fail the save take 1d5 points of permanent ability damage to each ability score (except Luck) each round. Beings infected at Stage One are immune.

The virus is airborne at this time, and exposure to atmosphere where the virus is active can cause infection. This stage lasts for 1d24 years. (It lasted at least 17 years on Waste Station 3M-TA3.)

At Stage Three, creatures infected become nonmagical un-dead. Although they retain an echo of their former personalities, and are able to work cooperatively, they are tools used by the virus to consume and spread. Contact with these un-dead can transmit Stage One of the virus, and these un-dead do not continue to attack those who become infected. Even the remains of these un-dead, once destroyed, can transmit the virus unless they are burned. Improper disposal of such remains led to the infestation on Waste Station 3M-TA3.

This stage is permanent. Any creature with a Stage One infection must succeed in a DC 10 Fort save each day once Stage Two commences, or succumb to Stage Three. At Stage Three, the infected characters are dead. Even if the disease is somehow cured, they remain dead.

In Mutant Crawl Classics, fatal feast un-dead have no alignment. Physical mutations may remain still be manifested by the un-dead creatures, but mental mutations are lost. Note that plantients (and other non-animal beings) are immune to Virus TFRW-2012-SA05 in all of its stages, and are not targeted by the infected, unless required for self-preservation.

This is a nasty, nasty surprise to spring on characters, no matter what stage is active when it is encountered.

If the means to avoid and/or cure the virus are present, it might make a kick-ass funnel adventure, though. In this case, encountering the remains of a fatal feast un-dead after being sealed into the adventure location can kick off the action, with players retaining control of their infected PCs as well as their non-infected PCs. PVP combat abounds!

A sealed area releases the Stage Two infection. Hope your surviving PCs have been inoculated by this point. Then on to confront the un-dead masters in order to escape the adventure location. Finally, for the big finale, blow it all up so that the virus cannot escape!