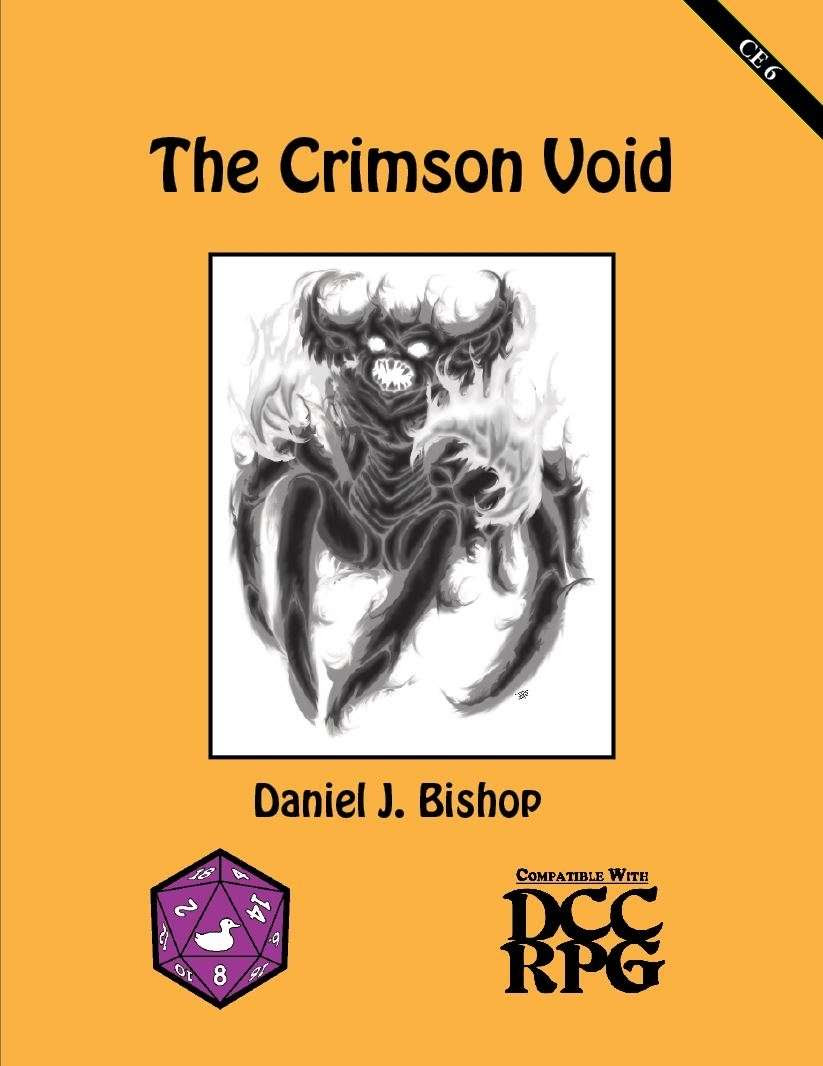 This is just a quick note to tell you that CE 6: The Crimson Void is now available.

Any role-playing game session can take a left turn at Albuquerque, leaving the poor Game Master wondering what to do next. This is even more true for the dedicated Dungeon Crawl Classics judge, who discovers that patron quests, divine disapproval, and the requests of gods to pay back divine favor can make the game take incredible new turns with the roll of a few dice.

Add to this the advice urging players to “Quest For It” when they want something unusual for their characters, and you have a potent stew for gaming, but also a situation in which the judge may want strong DCC elements with a minimum of preparation required.

The Campaign Element (CE) series attempts to address these specific areas. Now, when your wizard is looking for a spell, your cleric is sent on a mission from her deity, or your thief simply wants to find a location where stealth and a cunning mind are paramount, you will have an answer at your fingertips. Weave these campaign elements into your world, mesh them into other modules and areas of your own creation, and watch the “Appendix N” vibe of your games grow.

In addition, for various reasons sometimes only a few players were available for a night’s gaming. Each Campaign Element is short enough to be played through by most groups in only a single session. That doesn't mean that the value of the area is limited to a single session – each adventure includes notes on “squeezing it dry”…effectively getting the maximum re-use from your investment.

CE 6: The Crimson Void describes a unique goddess (Kala Môr), Her cult, temple grounds, as well as the priests and other beings associated with the location. The easiest way to use this material is to allow PC clerics of Kala Môr attached to this temple. Kala Môr may also be used as a template for creating unique deities of the judge’s own devising. Other characters may oppose the temple, come to it for aid, attempt to prevent a sacrifice, or need to leap into the Crimson Void themselves. Robbing the temple of its riches would be a crowning achievement for any thief. A Neutral deity was chosen to allow the judge to easily use Kala Môr as both aid and adversary to any group as he chooses.

A setting element to help create a rich campaign environment for DCC games of all levels.
Posted by ravencrowking at 12:07