The Descendents of Gith 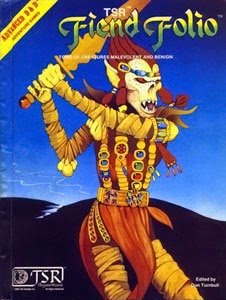 My githyanki hail from the 1st Edition AD&D Fiend Folio, created by Charles Stross. Just seeing the creatures on the cover made my heart race. Indeed, I found the Fiend Folio indispensable, and its wild exuberance informs my monster creation to this day. Not every creature was equally well realized, but the attempt to do something great often overshadowed an individual creature's failings.

Without further preamble, I present to you my version of the githyanki and their adversarial brethren, the githzerai. 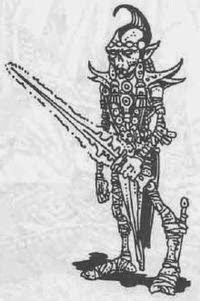 The githyanki were a race of evil humans, conquered millennia ago by squid-faced psionic flayers. Bound to service by their conquerors, they were used as slaves and occasional food, for the flayers ate the brains of humanoid creatures. After centuries of servitude, the humans arose against the psionic flayers under the leadership of Gith. Having developed their own psychic and physical powers, they succeeded in throwing off the horrid yoke of slavery to the brain-eating creatures. Taking their name from their leader, they became known as the githyanki.

The githyanki dwell in huge castles floating in the astral plane, but can project themselves to material worlds, where they seek to obtain slaves and riches of their own, or to defeat their former masters wherever they may find them. They are said to worship an immensely powerful lich-queen. In some cases, they have allied with powerful fire-breathing dragon for mutual benefit. Each castle is ruled by a Supreme Leader who automatically carries a silver sword (see below).

Let there be no doubt – the githyanki have a well-deserved reputation for violence. For each githyanki encountered, roll percentile dice and apply the following adjustments:

01-40     No change.
41-56     Tougher: Add +1d3 HD, and raise saves by 1 per 2 full HD increase.
57-60     Superior Psychic Blast: Does +1d6 damage.
61-64     Superior Psychic Shield: Gains a +4 bonus to Will saves.
65-70     Psychic Power: The githyanki possesses a special psionic power. See below.
71-77     Spellcasting: Can cast spells as a (1d3: 1-2 wizard or 3 cleric) of level 1d3. If rolled again, the githyanki may be able to cast spells as if it had two classes. Levels of the same class stack, up to a maximum of 6th level.
78-80     Illusion Generation: The githyanki can project mental illusions to a range of 60’. These cannot cause damage directly, but can mislead or otherwise cause targets to damage themselves. The githyanki must concentrate to maintain the illusion. Will DC 20 negates when the illusion is interacted with.
81-90     Arcane Blade: The two-handed sword used by the githyanki has a +1 bonus to attack rolls and damage, and can strike creatures as though it were magical.
91-94     Knight: The githyanki gains 2d3 HD, and gains a +1 bonus to all saves per 2 full HD gained. The githyanki knight can cause damage or heal with a touch. Each instance uses the Hit Die type of the target. Each day, the knight can heal or cause damage in dice equal to the knight’s own Hit Dice. Each touch can use a part, or the whole, of this effect. For instance, a 4 HD knight could heal 1 HD to himself, and later cause 3 HD to another. There is a 5% chance per Hit Die that a knight will have a silver sword (see below).
95-99     Silver Sword: The githayanki possesses a silver sword. See below.
00           Roll again twice.

Another offshoot of the same evil humans who spawned the githyanki, the githzerai dwell on Limbo, but may be found upon material worlds as well. Their war with the githyanki is vicious and eternal, as neither side can gain supremacy for long. The githzerai have an uneasy truce with the psychic flayers which enslaved their ancestors, which is constantly broken in isolated raids and skirmishes. They are said to be ruled by an undying wizard-king. 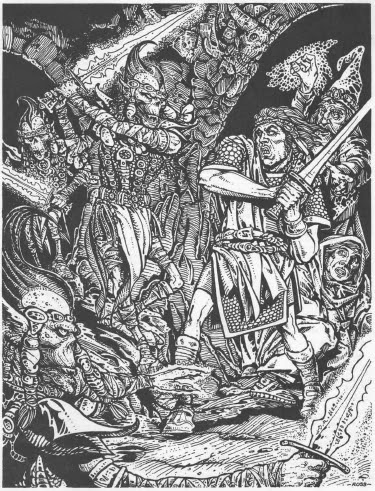 The silver swords of the githyanki act as +3 weapons, but they are not magical. They have a critical range of 19-20. On a “20”, instead of rolling for effect, a silver sword severs the astral cord of an astral traveller unless it succeeds in a DC 20 Will save, or decapitates a material foe unless it succeeds in a DC 20 Fort save. If either save succeeds, the attack instead does double normal damage. If a silver sword falls into non-githyanki hands, they will go to any length to recover it.

If psychic powers are indicated, the judge is encouraged to consider the psionics systems presented in The Wizardarium of Calabraxis or Crawljammer#3, both of which are resources that any self-respecting judge should own in any event. Barring those resources, roll 1d7 and consult the following table: