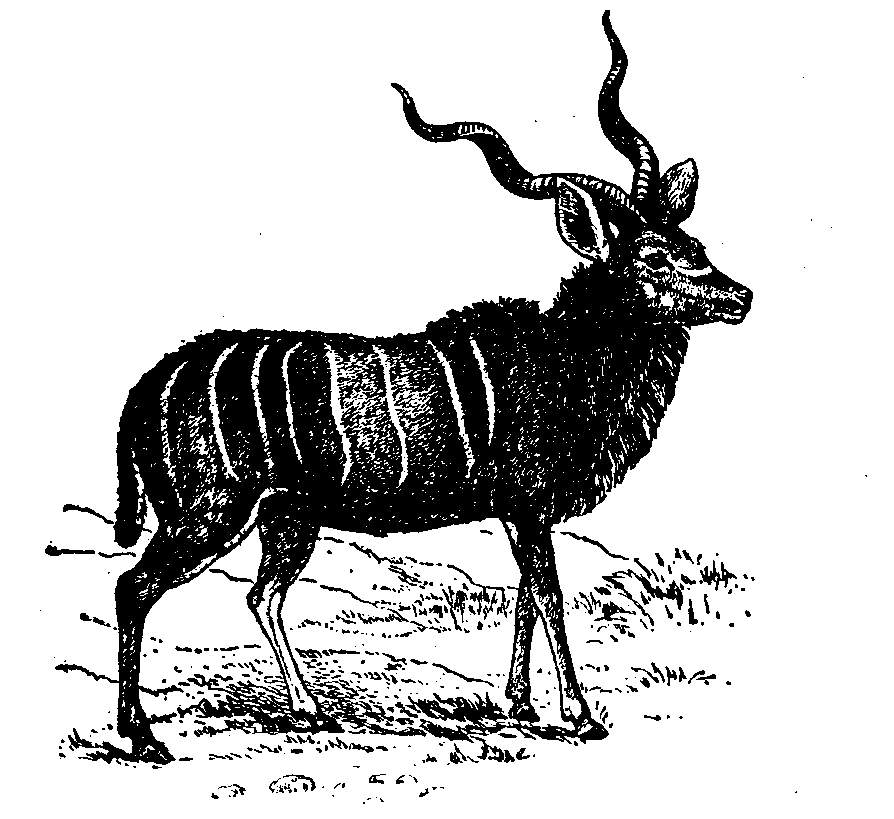 When I was working on RCFG, I wanted a lot of normal animal types to be represented, so I did a fair bit of research on animals modern and prehistoric, including the material presented herein.

This entry represents a number of related animals, including both true antelopes and animals that are similar enough (such as the giraffe) to be described in the same basic listing.

Antelopes of various types are very common prey to large predators, and may also be hunted by humanoids.  Antelope all have horns of some sort, and most can deliver a potent butt or kick.  The pelts of many antelope are valuable, as indicated below.

This entry gives details of fourteen types of antelope and similar creatures.  The Judge is encouraged to invent species of fantastic antelope from these examples.  Antelope often travel in mixed herds, sometimes including unrelated species, such as zebras.

All of the creatures in this post are hereby considered OGC, with the copyright information "Varieties of Antelope by Daniel J. Bishop, Raven Crowking's Nest (c) 2014." to be included in Section 15 of the OGL.

A bongo is an African forest antelope that is mostly nocturnal.  Both genders have curved horns.  Their coat ranges from auburn to mahogany with ten to fifteen thin white-yellow stripes.  The reddish pigment comes off very easily.  A bongo’s coat is worth 1d4 x 10 sp.  They stand approximately 3 feet high at the shoulder and weigh up to 890 lbs.

A dik-dik is a very small African antelope with short horns.  It is named for the sound it makes when startled.  They are found in both forest and plains, preferring locations where there is enough foliage to hide in.  They are 1 to 1 ½ feet in height and weight from 6 to 15 lbs.

An eland is a large antelope native to the African savannah.  Its meat and milk are especially nutritious, making the animal worth 2d4 x 5 sp for its meat value, or 2d6 x 5 sp alive.  Eland can be ranched successfully for milk and meat.  They stand up to 6 feet high at the shoulder and can weigh up to 2,200 lbs.  Female elands will band together to protect their calves. 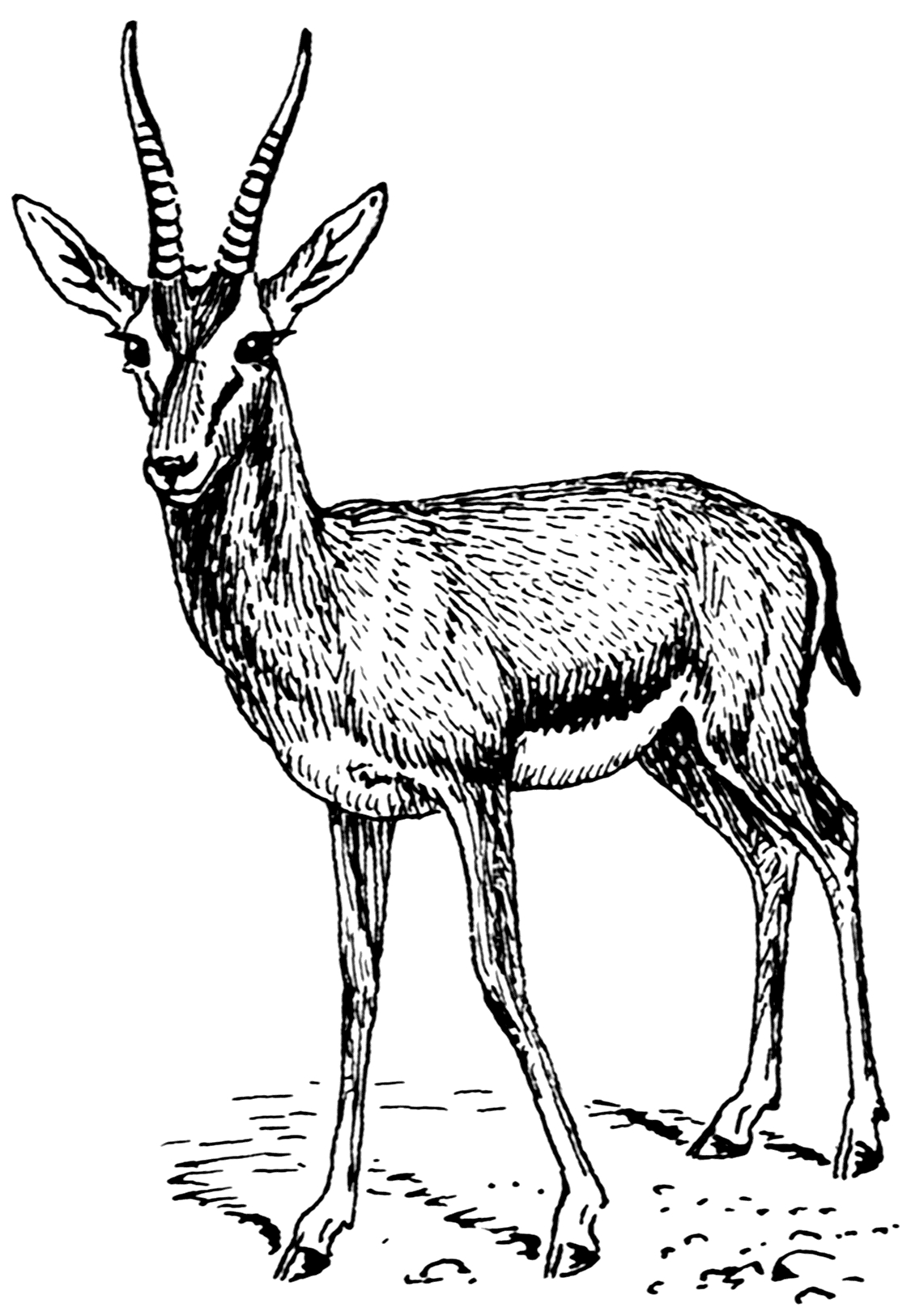 Gazelles are small, swift antelopes found in Africa, Asia, and India.  Their hide is worth 1d6 x 10 sp.  The average gazelle is about 3 to 4 feet long and weighs up to 66 lbs.

The giraffe is not actually an antelope, but is often found travelling with herds of antelope and zebras.  Giraffes are known for their height – with their long legs and necks, giraffes can reach almost 20 feet in height, with most ranging between 9 and 15 feet high.  Even a newborn giraffe is over six feet tall.  Adults weigh up to 2 tons.  Although they do not butt, they can give an extremely powerful kick or slap larger opponents with their necks.  Their skins can be sold for 2d6 x 10 sp. Giraffes are sometimes called “camelopards”.

Impalas are small, swift African antelopes.  The males have impressive curved and spiralling horns that are themselves worth 1d6 x 10 sp per pair.  They can be up to 5 feet long, weighing from 88 to 145 lbs.

A kudu is a large African antelope.  The males have thick, spiralling horns, valued at 1d6 x 10 sp each.  Kudu horns are sometimes turned into musical instruments.  A kudu hide is worth 1d4 x 10 sp.  Males may be over 8 feet long, and weigh up to 690 lbs.

Nilgai (singular and plural) are large, ox-like creatures related to antelope.  On Earth, they are found in India and Pakistan.  The females have yellowish-brown coats, with the males becoming darker grey-blue with maturity.  Adults can be between 6 and 7 feet long, and weigh up to 660 lbs.  Their horns are short, and have no particular value.

Oryx are large antelope with sweeping, scimitar-like horns, native to Africa.  They are found in arid regions, where they are active mainly at night and in early morning.  Their horns are valued at 1d4 x 10 sp each.  They can be up to 7 feet long, and weigh up to 460 lbs.

The pronghorn antelope isn’t a true antelope, but is an antelope-like animal native to North America.  They are also known as “Prairie Ghosts”.  A pronghorn can be up to 5 feet long, and weigh up to 155 lbs.

Reeboks, waterbucks, and similar antelope live in wet areas of Africa, seldom straying far from water.  When threatened, these antelope can submerge themselves with just their nostrils showing, and this is a common tactic when a morale check is failed.  They are from 4¼ to 7¾ feet long, and weigh from 110 to 660 lbs.

Riding Bukkas are large antelope with bluish-grey coats striped with black.  Their long horns curl and spiral backwards.  Bukkas are tamed and used as riding beasts.  Because of their low morale, they do not make suitable war mounts – even extensive training cannot generally raise their Will save higher than +0.  A riding bukka is worth 45 gp as a mount.  War mount training increases this to 75 gp.  A riding bukka stands up to 5 feet high at the shoulder and weighs up to 2,000 lbs.

Wildebeest, or gnus, are large antelopes with an ungainly (but powerful) build.  A herd of wildebeest can trample a creature for 1d6 points of damage per wildebeest that passes the area (Ref DC 15 for half). Wildebeest herds can be as large as 1,000 head (1d10 x 100 individuals).  Usually, only 1d10% of the wildebeest in a herd can actually trample any given individual creature, but even 1% of 1,000 head is 10d6 damage!  Cornered wildebeest are not afraid to attack opponents; they gain a +8 bonus to Will saves for morale checks when cornered. 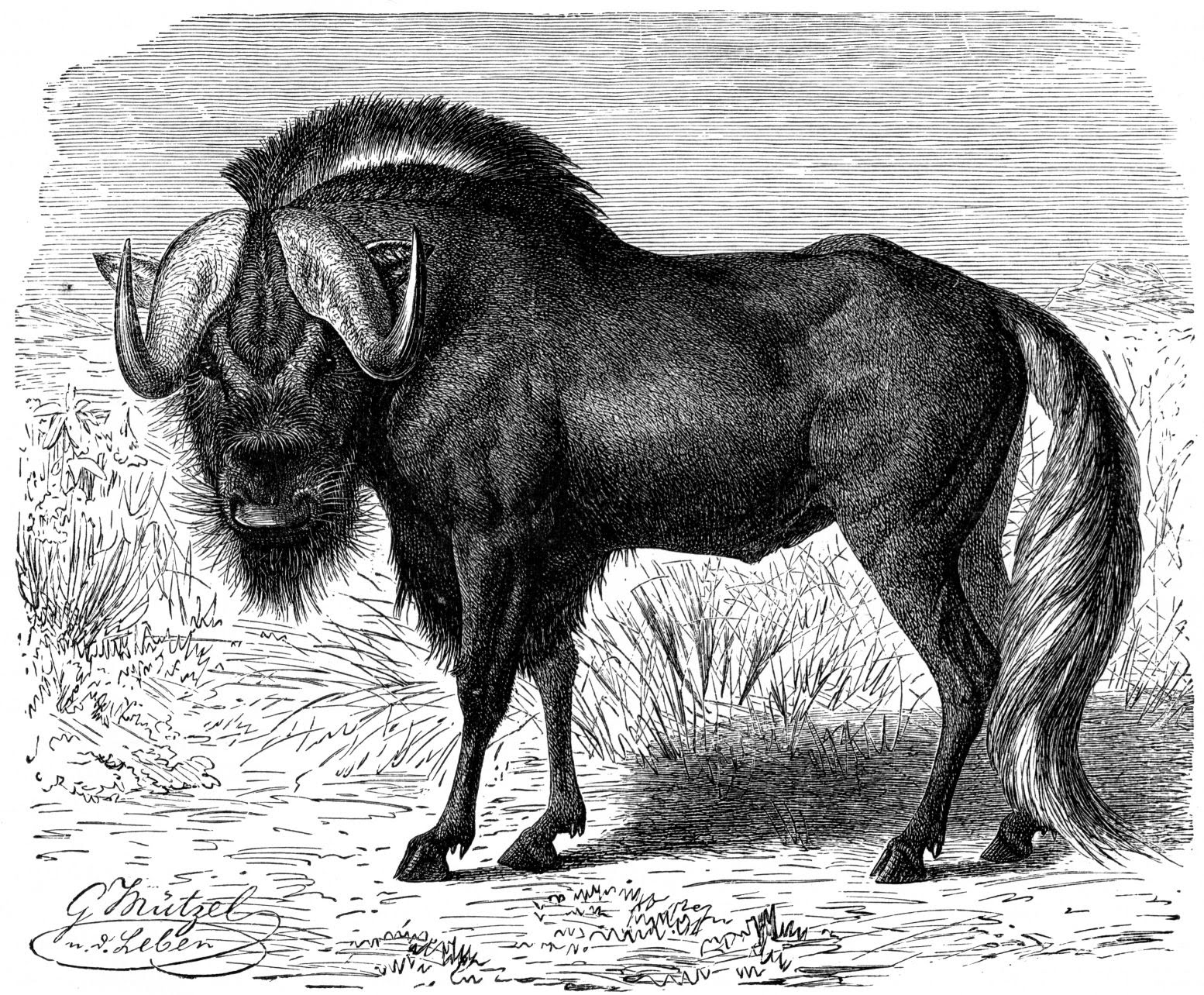 Antelope of all types generally flee from aggressive creatures, counting on agility, speed, and numbers to overcome predators. Some antelope are more aggressive, and may attempt to butt. Kicks are usually reserved for predators (or characters) approaching from behind, while continuing to flee.  Wildebeest, as noted, may trample.

The Judge should check individual descriptions, above, for special tactics that a specific type of antelope may use.  Antelope are skittish, and their high Initiative bonuses and low Will saves reflect a tendency to flee with the smallest provocation.

Part of Appendix N literature is given over to the strangest of beings - creatures of magic or super-science.  Yet, another part of Appendix N includes Solomon Kane or Tarzan traversing Africa, encountering normal animals as well as the bizarre.  Even Conan encountered lions as well as man-apes.

Creating creatures for use of your campaign milieu (and adventures!) is also fun.  Variations of creatures add to the detail of the game world, and are good practice for envisioning monsters (etc.) within the context of the game system you are using.

Also...Safari!  While we would not go out to hunt animals for their horns and hides in the real world (one would hope), this is fair game  (pun!) in a fantasy world lacking modern ecological concerns.  It is also an opportunity to provide adventure hooks, such as elephant graveyards, lost cities, lost worlds teeming with dinosaurs (such as Maple White Land in Sir Conan Arthur Doyle's The Lost World), etc.  King Solomon's Mines beckon!