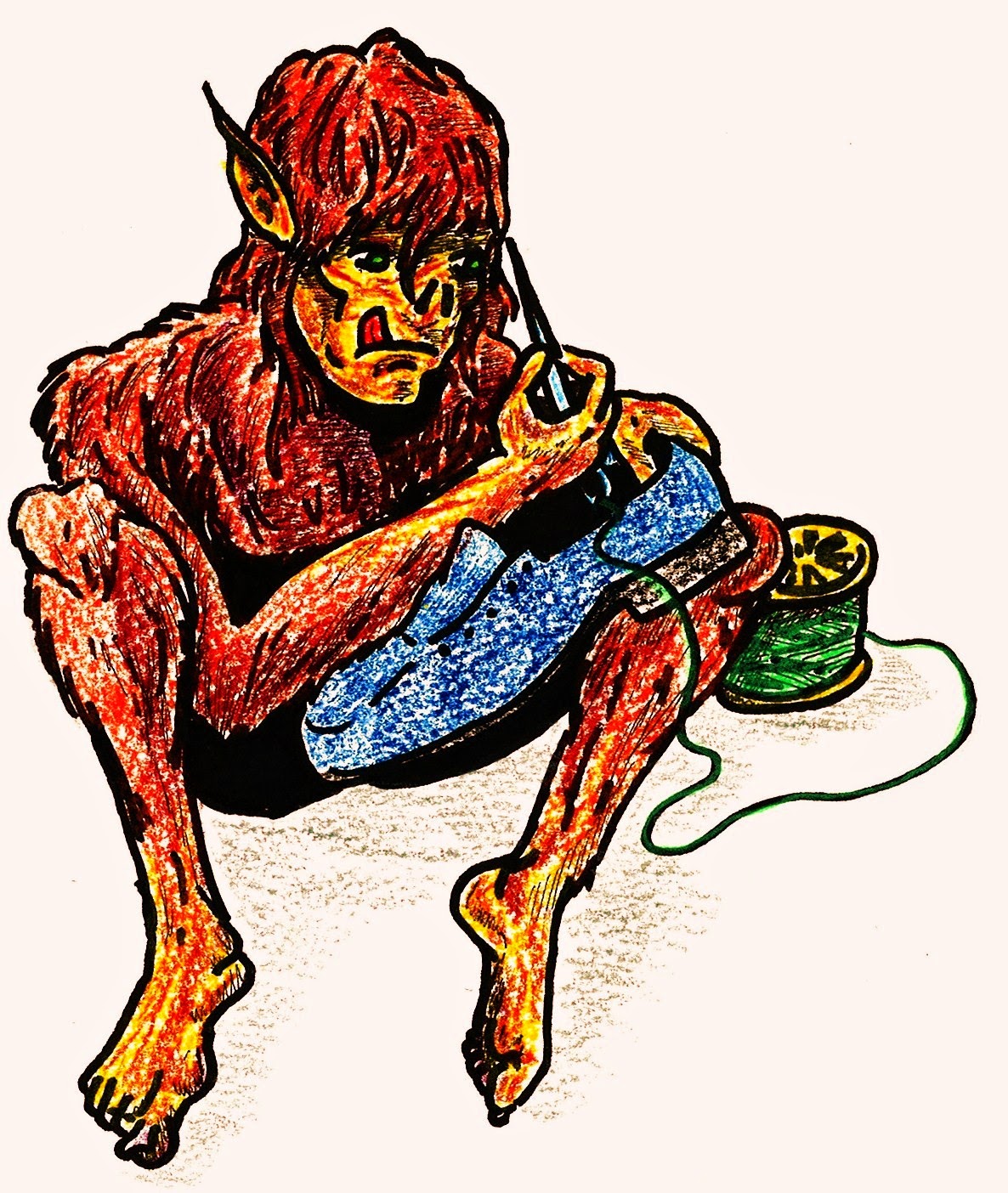 A brownie appears to be a three-foot tall, hairy man, frequently with only nasal slits instead of a nose.

They are shy and retiring, preferring not to be seen by those of mortal races. Despite their size they are fantastically strong.

Brownies attach themselves to individuals or households, performing work in exchange for a bit of bread and a small bowl of the best cream.

Like many fey, brownies are easy to offend, so that gifts (including food) left for a brownie must be placed for the brownie to find – they should not be obviously gifts.  Some few (10%) brownies have been known to accept other gifts without offence, such as a linen shirt once a year, but this practice is perilous because, should the value of the gift diminish or grow, the brownie will certainly take offence.
A brownie that is happy with its household can do the work of ten people, and will help with such tasks as harvesting, reaping, threshing, cleaning, keeping animals safe, spinning wool into thread, making shoes, baking bread, brewing, or any of a thousand other tasks that can be done while the household is asleep or is busy elsewhere.  Brownies do not like to be observed at their work, and intentionally watching them can cause them to be offended (50% chance).

Most brownies stay hidden during the day, and most households with brownies know – and avoid – the spot where their brownie likes to hide.  This may be a dark corner of the house, a cellar or attic, somewhere in the barn, or even in a nearby hollow tree or ruined building.   A brownie who is disturbed in its hiding spot is 75% likely to take offence.

Billy Blind:  A billy blind is a special type of brownie that usually dwells in or near the fireplace or chimney.  It is blind, but has the ability to prophesy.  Questions may be whispered up the chimney, and if the billy blind knows the answer, it will whisper it back down.

Boggart:  An offended brownie becomes a boggart.  It can be difficult to tell one from the other initially – stories tell of brownies who only reveal themselves to be boggarts when it becomes obvious that all the good luck of their household is at the expense of the (infuriated) neighbours.  In general, while brownies have only slits for nostrils, boggarts have sharply pointed noses.

A mischievous boggart performs pranks meant to annoy rather than to cause real damage.  It might hide important pieces of equipment, spook the livestock, clog the chimney, or rearrange the furniture while the household is asleep or out.  In many ways, the behaviour of such a boggart resembles that of a gentle poltergeist.  Any reasonable attempt to make amends with the boggart has a 50% chance of being successful.

A malicious boggart uses its abilities to harm the household, but isn’t seeking anyone’s death.  Such a boggart will ruin crops, lame animals, steal equipment outright (and it will seldom, if ever, be found again).  It will ruin materials, cut straps, put holes in pots, and otherwise prevent the household from prospering.  All skill checks made in the household suffer a –4 penalty due to the boggart’s sabotage.  Any reasonable attempt to make amends with the boggart has a 25% chance of downgrading it to a mischievous boggart.

A deadly boggart means to see its household dead.  It saws partly through saddle straps, balances blades over doorways, carefully places items near the top of stairways to cause falls, and so on.  In such a household, all skill checks suffer a –4 penalty due to the boggart’s sabotage, and each member of the household over the age of nine must make a saving throw each day (DC 20) or suffer 1d6 points of damage due to a boggart-inspired accident.  If the save fails by 10 or more, the individual takes 2d6 points of damage instead.  Each individual can use its best save bonus for this saving throw.  Any reasonable attempt to make amends with the boggart has a 5% chance of downgrading it to a malicious boggart.

Brown Man:  A brown man, sometimes called a Buckawn or Bucca, is a type of brownie that protects natural regions.  Unlike most brownies, the brown men often travel in groups of 2d6 individuals and are not shy of being seen.  Often a single brown man will appear to mortals travelling in an area they protect, warning them not to harm beast or fowl in their lands, and to do no damage.  Those who attack the brown man, or violate his prohibitions, find themselves losing Luck, and possibly feathered with stone-tipped arrows sped by unseen hands.

Fenodyree:  The fenodyree is a large brownie, taller and bulkier than a man, and hideously ugly.  Like most brownies, it is shy around mortals.  The fenodyree aids in reaping, mowing, threshing, and herding during the hours between dusk and dawn.

Killmoulis:  A killmoulis is a tiny brownie with an enormous nose, but no mouth.  It lives in mills, where it aids the miller by grinding grain during the night and keeping the mill free of mice and rats.  It attacks using a poisoned needle.  The needle does a single point of damage, plus poison (1d6 Sta damage, Fort save DC 15 for half damage, rodents have a – 4 penalty to the save and take double damage).  Killmoulis apparently eat by stuffing grain up their noses, and can communicate by telepathy with a whispery-sounding voice at a range of 30 feet.

Victorian Brownie:  Compared to the traditional brownie, the brownie of the Victorian Era was smaller (as with the killmoulis), and formed more similarly to a human or elf.  They have normal noses, pointed ears, and are not exceptionally hairy.  A Victorian brownie never becomes a boggart or curses its household.  If offended, it simply leaves.
Posted by ravencrowking at 18:03