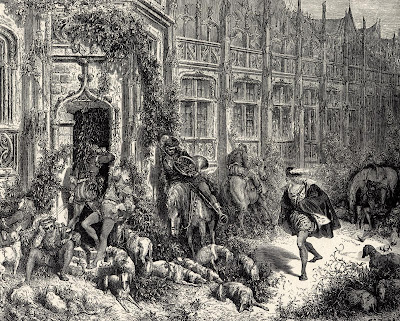 Text and rough maps are done!  The rough maps have gone to the cartographer!  Purple Duck's Mark Gedak will be playtesting this at Great Falls Gaming Rendezvous this upcoming weekend.  I found it hard to parse the location from the GFGR page, but I am told that it is in central Montana.  If you are in that area, and happen to participate, I hope you will let me know about your experiences with the adventure....

After playtesting still comes layout and approval, but it is on its way!

Prince Hubert Charming, son of the Baron of Westlake, and heir to Westlake Manor, is well known as a cold man, whose watery blue eyes seem to betray no emotion at all.  Yet he is a great lover of beauty, as all his wives have proven.  The first he found working in the cinders of a woodsman’s cottage.  Some say that the girl’s jealous stepsisters threw her down a well to prevent her from becoming the young prince’s bride, but even death did not bar Prince Charming, and she enchanted everyone at the wedding.  Her stepsisters were placed in spiked barrels filled with hot coals and dragged through the town until they themselves died.

Whatever process Prince Charming used to revive his bride, it did not last forever.  All too soon, the Princess Ella took ill and died.

Charming then found another bride, and there was no doubt in this case that she was dead.  She was entombed in a glass coffin guarded by half a dozen or so dwarves.  Yet, when Prince Charming injected his magic elixir and kissed her upon the lips, her eyelids fluttered open and she breathed again!  The story was told that the new Princess had been in but a deep coma, a sham of death, until a poisoned apple was dislodged by the Prince’s kiss.  But folk began to whisper in dread, and none were surprised when it was announced that Princess Snow, like Princess Ella, succumbed to a fatal illness after only a few years of marital bliss.

In all kingdoms there are tales, and in the Barony of Westlake, it is said that the Grimmswood hides the ruins of a long-lost realm.  The daughter of its final king, cursed by a malevolent faerie, pricked her finger on a spindle upon her sixteenth birthday, in the blossom of her youth, and died.  With her death, the kingdom went to ruin.  Few now dare to go far into the Grimmswood, although the riches of the lost kingdom are said to lie unclaimed within.  Fear of dark fey magic and even greater evils keep men out.

Or they did so until now.  For Prince Hubert Charming of Westlake has determined that the long-dead Princess Beauty is only cursed to sleep away the aeons, and he will have her for his bride.  His men rounded up a stable of “volunteers” at the beginning of one early autumn morning, and here you are, with what makeshift arms and equipment you had upon you when you were “volunteered”.

Your mission, the Prince’s Bailiff explains, is to enter the ruined castle, find the place where the “Sleeping” Beauty lies, and bring her forth for Prince Charming to restore with a kiss.  Those who choose not to go upon this quest must take their chances with the Prince’s Guard, twenty men strong, and be declared outlaw.  Those who choose to hazard their lives within the ruined castle may keep what they find, apart from the sleeping princess, but dare not leave without her.