When I first proposed Prince Charming, Reanimator, to Mark Gedak at Purple Duck Games, I was imagining that we would use some of the classic fairy tale illustrations in the project.  After all, many of the really old images are now in the public domain.  As a reminder, I am personally making no money on the project, and the pdf version will be free.  So, under circumstances like these, keeping costs down is a logical step to take.  That Mark would have to turn my sketch map into something cool was a given…and I think you will agree that Kristian Richards did an excellent job on the cartography, even without being forced to see the scraps I gave her to work with!

Imagine my surprise this morning when I was “mentioned” by Mark on Google+, and I caught a glimpse of the artwork commissioned for the module!  Wow!  The immediate result of this is that I had to post, if only to share some of these wonderful illustrations.

I was lucky enough to be asked onto the Spellburn podcast (and that has not been released yet, but I’ll drop a note here when it is), and we talked a bit about adventure creation.  In the case of the FT series (Faerie Tales from Unlit Shores), I went about the process by choosing a number of classic fairy tales, both known and less known, to draw from.  Then I mated them with a number of Appendix N stories, so that there is a synthesis between the classic material and nods toward the material that Dungeon Crawl Classics is based on.  Then I re-read all the original materials while making notes on images and themes I wished to use, considered encounters and locations, and started doing some basic relationship sketches that would later be turned into a sketch map. 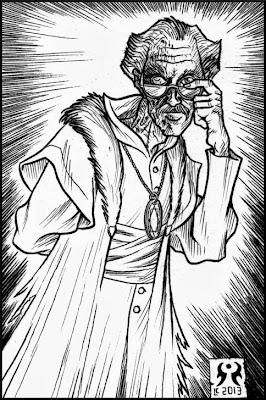 An homage to other work does not simply re-use the material, but rather re-imagines it in some fashion. While Prince Charming, Reanimator includes many nods to H.P. Lovecraft’s Herbert West, Reanimator and Charles Perrault’s version of Sleeping Beauty, it also uses other fairy tales for inspiration, as well as other Appendix N fiction, and a healthy dose of just making things up.

Why should you plan on getting this adventure?

(1)  It’s free in pdf.
(2)  The artwork and cartography are amazing.
(3)  It is a 0-level funnel with a dragon.
(4)  It has a basic write-up for a new patron.
(6)  My older daughter refused to playtest it because the idea stepped all over her cherished childhood memories.  To paraphrase, “Prince Charming is supposed to be a nice guy, not somebody who marries dead people.”
(7)  Did I mention that it’s free in pdf?  A Print-on-demand option is also being planned for.

I’ll give a shout out when it is released, and hope you enjoy it.  For more H.P. Lovecraft-inspired fun, and 0-level funnel mayhem, look for The Arkham Grinder, coming soon from Crawl!Fanzine.
Posted by ravencrowking at 10:21