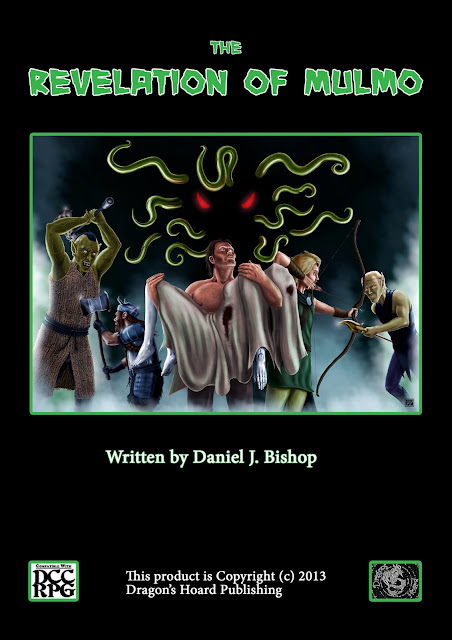 At the time of this writing, The Revelation of Mulmo has just been approved by Joseph Goodman, and should be available soon at the usual locations, such as rpgnow and drivethru.

This pdf is 76 pages long.  Even including maps, a one-page advertisement, and covers, that is a lot of pages of adventure, with 60 described areas, a new spell, and three new patrons.

(These are incomplete write-ups - no patron spells! - but I think you will find them useful.)

Important information is reproduced from Angels, Daemons, & Beings Between for judges lacking that reference work.

If you backed Angels, Daemons, & Beings Between, well, this was the last piece in the puzzle.  Lead developer Sean Conners will be up late tonight sending emails and moving the project to a close. So good news there. 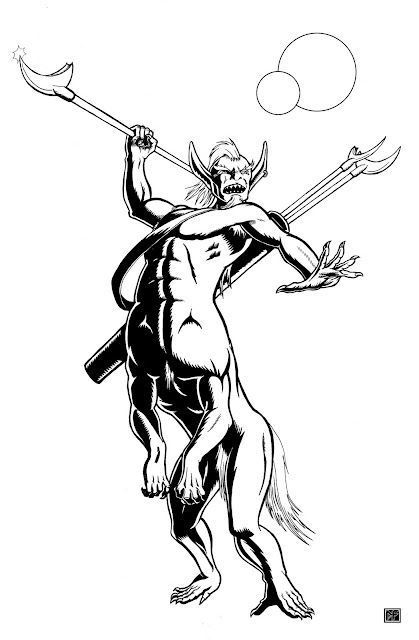 In addition to using the same terms as Angels, Daemons, & Beings Between and Tomb of Curses, allowing other writers and publishers to use the included patrons in their own approved DCC work, The Revelation of Mulmo adds several monsters to the OGC, allowing them to be used by anyone and any time and with any game system.

Why?  Because we love the Open Gaming License, and we think that you will want to use some of these monsters in your own work. Like the fellow to the right.

Art is by David Fisher, and I think it is quite good.  I have included a couple of samples in this blog post to whet your appetite.

While every monster is not added to the OGC, the monsters added follow a particular theme, and I truly hope that someone will pick it up and run with it.

Did I mention that the new spell (Scrying) is also added to the OGC?

In terms of price point, the prospective judge should find enough material between the covers to get a lot of reuse out of this adventure...if not by reusing the location itself, then by reusing some of the patrons, characters, creatures, and items within.

From the back cover text:

Death comes to us all…But what price are you willing to pay to bring back one you have lost?

In The Revelation of Mulmo, brave adventures risk magic, monsters, and the passage of time itself to bring a fallen comrade back from the dead.

This module describes a fallen elf hill, with descriptions of 60 locations, additional patron information, and a new spell. It makes use of patron information from the DCC rulebook and Angels, Daemons, & Beings Between by Dragon's Hoard Press.

If you are wondering how to make patrons more active in your campaign, this is the adventure for you!

If you are tired of elves being treated as goodie-goodies who live in the forest being nice to each other and to everyone else, this is also a module for you.  The elves in The Revelation of Mulmo take their essence from all of the depictions of elves in Appendix N fiction, including some which go by different names.

Taken together with this author's Stars in the Darkness (published by Purple Duck Games), you are given strong tools to completely rethink elves - making them less what they are in Lord of the Rings rip-offs, and a hell of a lot more Dungeon Crawl Classics!

Or, at least, that was my intention.  Hope you enjoy.