From Mercury to Yuggoth, and All Points Between

There came a point, when I was soaking myself in the delightful text that is the Dungeon Crawl Classics role-playing game, that I decided to go back and read the Appendix N fiction.  I mean, I had read quite a few authors and novels on the list, but there were also many that I did not know, and works of fiction that had passed me by.  If you don’t understand what I mean by soaking myself in the DCC core rulebook, you either have not read it, or your appreciation for the genre is very different from mine.  Because you are reading this blog, I am going to assume that you know what I mean. 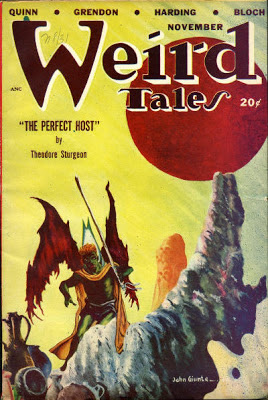 Eventually, there came a point where I was not just reading the list; I was studying it.  Whenever I worked on a new DCC project, it became integral to my thinking that no fewer than three homages to Appendix N sources should be intentionally included.  I have tried to do this as consistently as I can…although I admit that I allow for a greater breadth in Appendix N sources than some others might.  For instance, I do not stop at the Mars and Venus books of Edgar Rice Burroughs…nor do I even stop at Tarzan, The Moon Maid, and other adventure fiction.  Works like The Oakdale Affair and The Efficiency Expert are fair game in my books.

Within the 1st Edition AD&D Dungeon Master’s Guide, Gary Gygax mentions setting adventures on Jack Vance’s Tschai and Burroughs’ Barsoom.  Conversion notes are given for Boot Hill, indicating that perhaps the westerns of E.R. Burroughs and the weird westerns of Robert E. Howard might also have fit into Gygax’s vision of Appendix N.  What is very clear, though, is that a lot of stories in Appendix N fiction take place on other worlds.

And why not?  Who would not wish to adventure on the Mars of Edgar Rice Burroughs, Michael Moorcock, or C.L. Moore?  Who would not want to quest across the solar system as envisioned by Leigh Brackett, or travelled to far worlds like Skaith and Tschai?  Who would not want to be equal to – or even surpass! – Eric John Stark, John Carter, or Northwest Smith?  The canopy is vast, and the characters loom enormously over the landscape of their worlds and of our dreams.

The pulp magazines were full of stories like these.  John Carter could not adventure across Barsoom alone - he must also investigate one of its moons, and then travel as far as Jupiter.  Seeking out strange new worlds is a driving passion of many of the Appendix N authors.  These sort of stories even outnumber "lost world" stories, like those of the Pellucidar series, various survivals in Robert E. Howard stories, and the Caspak series that begins with The Land That Time Forgot.  Alien princesses and Low Canal Dwellers outnumber even the dinosaurs. 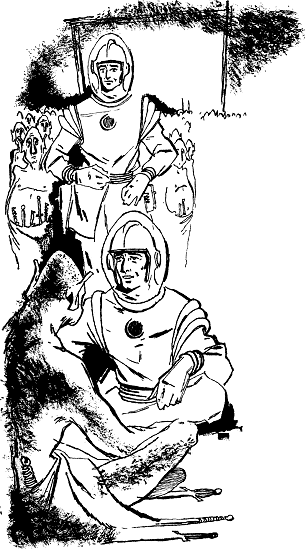 Likewise, Manly Wade Welman was not content to merely write about Hok the Mighty - he also wrote of aliens coming to take over that primitive world.

One of the first adventures I converted to the Dungeon Crawl Classics system was from Gamma World, as part of a funnel adventure.  I am actually playing this same conversion online, at Unseen Servant.  Fun, as far as it goes, but it does not go nearly as far as it should.

It has been suggested that the structure of the planes in AD&D was lifted from the works of Michael Moorcock.  Reading through Appendix N, I do not believe that this is completely accurate.  Moorcock’s work was influential, yes, but he was neither the first nor the best at using multiple planes of existence.  I tend to think that works like The Carnelian Cube and The Fallible Fiend, the Silver John stories of Manly Wade Wellman, and the writing of Philip Jose Farmer, Andre Norton, and Lord Dunsany, at the very least, were equally or more important.

In the DCC core rulebook, Joseph Goodman suggests using other worlds as destinations for adventures, exactly in the same way as various heavens, hells, and elemental planes are used in many fantasy role-playing games.  I find this good advice, and I think that Dungeon Crawl Classics is admirably suited for such play.  Sure, you need stats for laser guns, blasters, or similar weapons – possibly specific critical and fumble charts as well – and unique classes for the alien races you might meet.  But those things are actually little more than local colour…the same sort of local colour, perhaps, that any fantasy world should be given.  The system remains intact.

I am beginning to think that, running parallel to my regular DCC campaign, I should devise a setting that intersects, which is pure science fantasy of the type epitomized by certain Appendix N authors.  Not just a single world, such as Barsoom, Venus, or Ganymede, but an interconnected system of worlds.  Something that would make C.L. Moore or Leigh Brackett feel right at home.

What do you think?  Is this an idea anyone else would be interested in hearing more about?
Posted by ravencrowking at 00:14