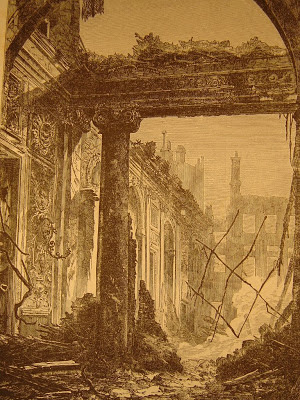 In my argument with Alexis, I pointed out that gaming material is not meant to simply be hung on the wall; it has no value until used.  In an earlier discussion, I had pointed out that material has meaning even if it is not brought directly into play.  These might seem to be contradictory positions.  I would like to explain why I think that they are not.

Let us imagine that a perspective judge is going to convert Keep on the Borderlands, Tomb of Horrors, and White Plume Mountain to include as part of a DCC RPG campaign.  The judge imagines that the game will start in the vicinity of the Keep, and that the Tomb and the Mountain will be locations within the campaign milieu, the first hidden and the second not-so-hidden.

All of these areas are in play immediately, in the sense that the 0-level PCs could decide to tackle, say, White Plume Mountain as their inaugural adventure.  The implication of a larger world is useless unless that larger world is actually there, and can be explored.  The judge can (and should) offer clues as to the relative risks of various campaign areas, but in the end, it is the players, not the judge, who decide whether or not to venture where angels fear to tread.

More importantly, they are in play in the sense that they have a “footprint” on the surrounding area.  The wise judge knows how to use this footprint to give areas meaning, so that when they are brought “into play” in the second sense (actually encountered at the table), they already have acquired depth, meaning, and history.

The evil priests in the Caves of Chaos have a spy in the Keep.  This spy never need appear “on stage” for his presence to be felt.  If the characters have loose lips around the Keep, the spy will learn whatever they say.  That means that the priests in the Caves will learn it also, after some delay, and will be able to prepare for it.  The group should be able to deduce the existence of the spy even without ever encountering or identifying him.

So, on the one hand, none of this material is meant to be a work of art, hanging inviolate on your wall.  You are meant to make use of it, directly or indirectly.  The elements of the campaign world that are not directly encountered can and should impact on those which are.  This is an important factor in allowing the game milieu to gain “a life of its own”.

On the other hand, being used does not always mean being brought directly into play.  The spy in the Keep is important even if never encountered directly.  Knowing that the Tomb of Horrors is out there gives players options even if they never choose to explore them.