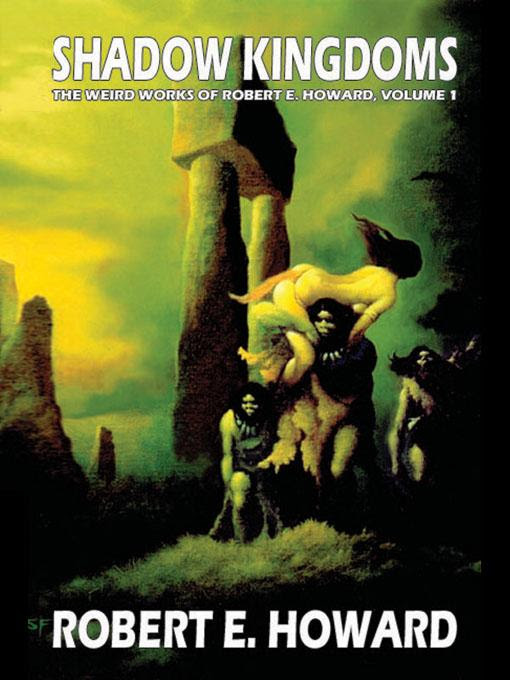 Starting in 2004, Wildside Press began to publish all of Robert E. Howard’s work from Weird Tales, sequentially as it appeared, under the sobriquet of “The Weird Works of Robert E. Howard”.  To round out the volume, they include a few other pieces of Howard’s poetry, which were published elsewhere.  Shadow Kingdoms is the first volume, and contains 24 short stories and poems.

If you have read much of what I’ve written, you will know that I am a fan of Howard’s writing, so I find it a distinct pleasure to have a volume that shows how he grew as a writer over a relatively short period of time.

Spear and Fang is a caveman story.  Stories about cave men are actually well represented in Appendix N, including Manly Wade Wellman’s excellent Hok the Mighty stories and a lot of work by Edgar Rice Burroughs.  Howard’s Spear and Fang is not going to displace the writing of these other writers here, but we are at the dawn of Howard’s career as well as at the dawn of man, so we might forgive the fact that he is not yet at the height of his powers.

In the Forest of Villefore is a werewolf story.  Again, not a perfect story, but it does have one cool idea to steal for your game:  slain as a man, the spirit of the werewolf would haunt the protagonist forever.  It is not enough to slay the werewolf; the beast must be slain in its bestial form.  Howard actually goes into this more in the next story, Wolfshead, in which his strong powers as a storyteller begin to truly come to the fore.  These two stories, together, can be used by the aspiring judge to craft a werewolf adventure that players will long remember.

The next story, The Lost Race, has yet another take on the werewolf legend…one which might work better as a lead-in to an adventure, or a portion of an adventure, but which is probably not strong enough to be the major driving force.  In a way, this story is a step back from Wolfshead.

Three poems follow:  The Song of the Bats, The Ride of Falume, and The Riders of Babylon.  Howard is a fairly good poet already, and these are worth reading, although there is no direct gaming material herein.  The Song of the Bats, in particular, might be used as a handout for another adventure, were the judge so inclined (and thanks to Sir Robilarfor the idea) .

The Dream Snake would be tough to turn into an adventure, but worthwhile if done well.  One element of horror that does not often make its way into adventure gaming is forcing the PCs to wait before they can deal with a threat.  Another is the threat that a single character must face alone, even if he surrounds himself with other.  In The Dream Snake, a character dreams of a snake coming to slay him, which, it is implied, eventually happens.  One could see this as a punishment for defying a Patron of some sort (and there is one perfect for this in the upcoming Angels, Daemons, & Beings Between sourcebook), or as the result of a curse.  I made use of the general idea in a short encounter submitted to Crawl! Fanzine, which may eventually see publication, which I called “At Least He Had Guts!”.  When you read it, you will know the inspiration.

The Hyena is a great story, marred only by the racial politics of the time it was written.  Senecoza, the festish-man in the story, would make a fantastic recurrent villain in the DCC rpg…or in any other.  This is another glimpse of the stronger writing which Howard would later produce, and it is amazing to see him writing like this so early on.  It makes one wonder, had Howard not taken his life, what he would eventually have been able to produce.

The poem, Remembrance, follows, with its theme of reincarnation and being haunted by the misdeeds of past lives.  Reincarnation is another major Appendix N theme, appearing in Howard, Burroughs, Merritt, and others.  Moorcock’s “Eternal Champion” cycle hinges upon it.

Sea Curse is a story about a curse, obviously, which includes a damned ship that would be at home in a DCC campaign.

A poem, The Gates of Ninevah, follows.

And then the first Solomon Kane story, Red Shadows, makes its appearance.  There are a lot of elements to steal here for a weird fiction campaign.  When the PCs wrong another, the idea of the pursuing avenging angel in mortal form, their own Solomon Kane, is more than appropriate.  The bandit leader, Le Loup, is a great character that I have made use of in my own online Barrowmaze campaign (using DCC rules).  The Black God, N’Longa, and the interaction between the gorilla hunter and the gorilla (itself a revenge story that parallels that of Solomon Kane and Le Loup) are worth emulating.  There are, again, racial elements in this story that 21st Century readers may well find offensive, but if you strip those elements, there is much of use to the aspiring judge herein.

Skulls in the Stars is another Solomon Kane story, which could easily be adapted to a role-playing scenario.  The idea of ghosts and spirits returning to avenge those who wrongfully murder them for gold is one that ought to give pause to a PC or two....

Then we have a third Solomon Kane story, Rattle of Bones, which could be easily adapted to an effective role-playing game scenario.  It would be fairly easy to enlarge upon the theme – a murdered sorcerer whose bones are chained in a room, a murderous innkeeper, and an unrecognized enemy as a fellow-wayfarer.

The next poem, Forbidden Magic, contains some imagery of use to the DCC judge.

The Shadow Kingdom is the first Kull story, which introduces the serpent people who masquerade as men.  This ancient rivalry between humans and reptilian humanoids is echoes not only in later Howard work, but in other Appendix N writers, such as the Dragon Kings of Lin Carter’s Thongor stories.  Howard’s is the original and the best.  Consider also that, at some point, players will want their characters to be something more than mere freebooters.  They will not want to merely explore the world, but to order it to their liking.  In this respect, the Kull and King Conan stories of Robert E. Howard can point the aspiring judge to elements that can make ruling as much an adventure as wandering the lands.

The Mirrors of Tuzun Thune is the second Kull story, which deals with mirrors that are both magical portals (for visions, and perhaps more) and a trap.  A good story, and a good element for a DCC adventure, but not enough action for an adventure by itself.

Two more poems round out the collection:  The Moor Ghost (which may point to an interesting encounter, but is largely a reprisal of Skulls in the Stars), and Red Thunder.

Overall, this is a fine collection for reading, and a good collection for garnering game ideas.  The titles of Howard’s works are inspirational even if you don’t consider the stories and poems that follow.  In this collection, we see one of the greatest pulp writers of all time first approaching his craft, and rise quickly to its mastery.  This volume is very much recommended.
Posted by ravencrowking at 11:50