Everybody Else VI: Perils of the Sunken City 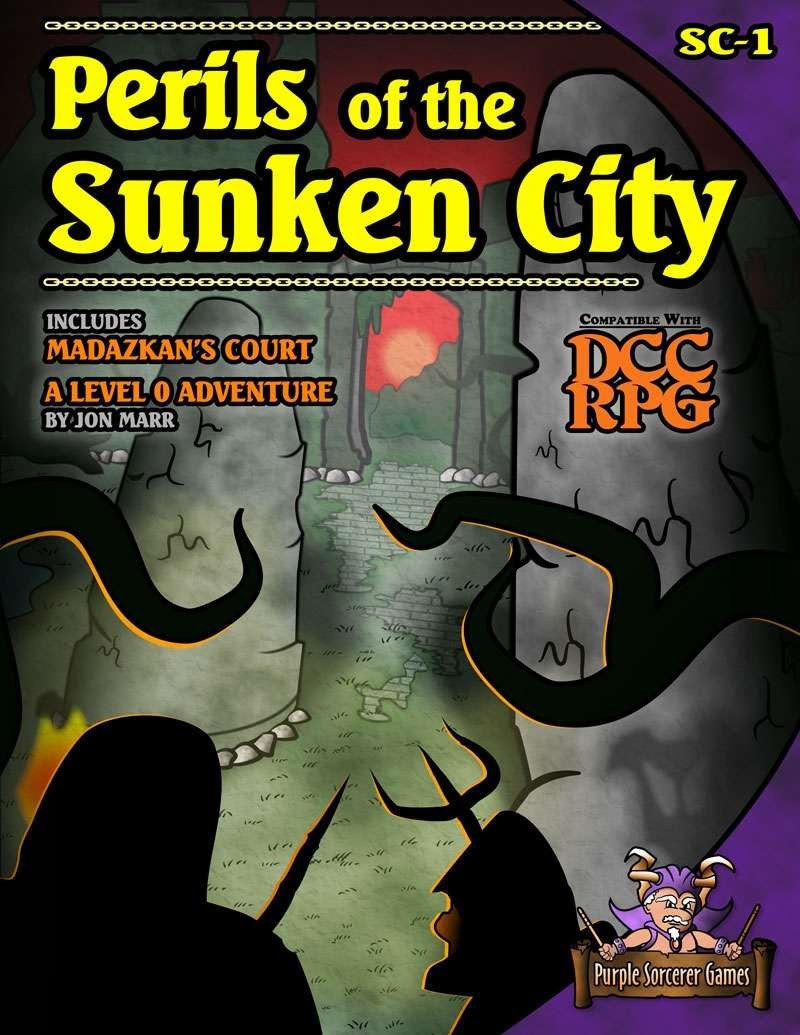 Perils of the Sunken City, by Jon Marr, is the first third-party product I managed to get my hands on for the Dungeon Crawl Classics role-playing game.  One of the first things I noticed with the module was that it set a different, but complementary, tone from the approach taken in the modules by Goodman Games.

The tone was definitely lighter, but it held an undercurrent of menace that I found appealing.  It also offered up an entirely new setting – the Sunken City – that offered many potential adventures beyond Perils.

And that lighter tone?  It in no way should be taken to mean that the adventure is any less deadly.

Appendix N includes a lot of potential sources, and the tones of these sources vary considerably.   It follows, therefore, that adventures in the Appendix N vein will also vary considerably in tone, depending upon who is doing the writing and what they are trying to achieve.

Spoilers, of course, will follow.  And, I know.  We get a little blasé about spoiler warnings in the Age of the InterWebs, but, really, if you are going to be playing this instead of running it, reading ahead is going to spoil your enjoyment.  This is true for any DCC module, where the primary joy is not just facing down opponents using a carefully constructed character, but figuring out the twists in the adventure itself.  DCC adventures share an appreciation of difficulty – stretching the player’s limits as well as the characters’ limits.

In my own campaign world, I placed the Sunken City as a future version of New Orleans.  Why?  Because that is entirely in keeping with Appendix N authors like Michael Moorcock’s future/alternate Great Britain and Sterling Lanier’s future/alternate Canada.  Plus, with creatures like crocodillos, opossum men, and a giant catfish, I couldn’t help but imagine the Bayou!

Perils of the Sunken City describes Mustertown, on the outskirts of the Great City (in my campaign world, New Orleans sprawled as far as Shrieveport, which eventually became the Great City of Nawleans), as a place where 0-level funnel characters can muster themselves into a company, role-play a little, and (later) be evaluated in terms of how well they did and sell what treasures they may have found.  The Sending Stone and the associated demon named “Sender” are a clever means of starting a number of 0-level funnels in the same location, making a good portion of Perils of the Sunken City reusable throughout the life of a campaign.

The “perils” in the module are several, and they are well thought out and fun.  My players were able to avoid the crocodillos, but they did encounter the opossum men.  In fact, we had enough deaths in the upper works of the module and the area immediately below that some of the players ended up playing the opossum men funnel characters so kindly provided on the Purple Sorcerer website.  Opossum men are sort of amusing, and sort of disgusting….rather like one would expect.  When they fumble, they “play dead”!

(Let me note here that the Purple Sorcerer website also includes paper minis and printable battlemats as free bonus material….Along with its die roller and character generator, Purple Sorcerer is all about supporting your game, and I feel it is only fair to support them with my purchases!  I hope you do, too!)

Interestingly, the ruins being explored were an ancient arena, brought low because of the jealousy one patron had when a wizard took a second.  The first patron is not fully described in the module (sadly) but there is enough information in the module to make the judge wish that a patron write-up had been included.  Some of the PCs, after all, may end up tied to the patron to some degree.

My favourite encounter in the complex occurs in the latrines (!) but my players, unfortunately, bypassed it.  If you have read the module, you will know that it is not how the encounter plays out, but how it is written, that is so darn good.  Even so, it is an encounter that I will eventually echo in my home game, preferably at some point where comprehend languages can be cast!

Overall, Jon Marr is to be congratulated on such a strong adventure right out of the gate.  I found myself craving more, and was very glad when I could get my hands on Purple Sorcerer’s next offering.   Although I get ahead of myself on the “Everyone Else” series, The Ooze Pits of Jonas Gralk is enhanced by the Mustertown section of Perils of the Sunken City, so this module is really the “anchor” for exploring the Sunken City.  To say that I feel I got my money’s worth is an understatement – although I had bought it in pdf format, I also bought the print version when it became available.
Posted by ravencrowking at 12:50