Everyone Else VII: Crawl! Fanzine 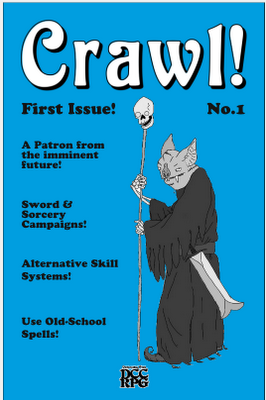 Part of the idea behind the “Everyone Else” series was to support folks creating products for the Dungeon Crawl Classics role-playing game.  Why?  A number of reasons.  The first is that, while I wanted to promote the products I am working on for this game, it just feels better to do so within the context of other people’s products.  The second is because there are so many excellent products being produced for DCC and I have been getting them all.  It goes without saying that, having them, having read them, and in some cases having played through them (or being in the process thereof), I have opinions.  Finally, I want to encourage others to continue promoting this amazing game!

And here we come to our first check, because, as I have been doing this, I have contributed to other products.  My contributions to Crawl! start with artwork in Issue 2, and, while there is much more to Crawl! than my scanty contributions, it is important to be upfront about their inclusion.

As I write this, there are four issues of Crawl! which I have read, and another issue that is in the post on its way toward me.

So, let’s look at the first four issues.

Issue #1:  This issue contains several truly useful articles for the aspiring DCC judge.  Wizards & Warriors! (Part I) looks at alternate rules for running DCC games without demi-humans, thieves (as a distinct class), or clerics.  These rules, as well as the alternate death and dying rules presented in Save or Die! would be appropriate for use in games with a single (or a few) higher-level PCs.  The issue has an article on easily converting spells from OSR games on the fly that is worth the cover price if there was nothing else but blank pages in the issue.  Another article looks at the DCC skill system, and offers some refinements.  Rounding this all off is part one of the first third-party published patron for this system, Van Der Dandenclanden! 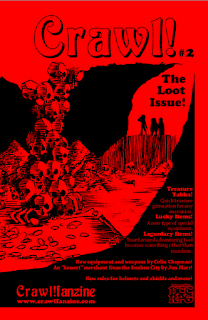 Issue #2:  I got this issue and #1 at the same time, and this is the issue that gets the most regular use at my table.  It is “The Loot Issue!” and within its pages one will find many ideas on the topic of treasure.  Dungeon Crawl Classics avoided including treasure tables, but, if you want them, they are here….with some discussion about converting treasures in OSR adventures into the types of loot one might hope for in DCC.  There is an article on lucky items which is very appropriate for a game in which Luck is a real factor.  There is discussion related to how an item can become lucky…or even legendary.  Jon Marr (of Purple Sorcerer fame) contributes an article that ties into the Sunken City line of modules.  One would think that would be the whole issue, but one would be wrong.  New rules for shields and helmets, new weapons, and new equipment round out the issue….the new equipment lists being the most referenced Crawl! pages at my table. 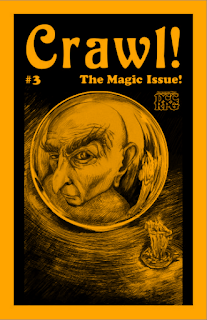 Issue #3:  The Magic Issue!   NPC Magic is an article that uses the ideas in Issue #1 to easily stat up NPC casters using simplified spells.  Consider the Kobold offers a kobold that is not based off of reptilian dog-men (or…shudder…really weak humanoid dragon-kin).  Van Der Dandenclanden is complete in this issue where his patron spells are revealed.  Talismans of Anti-Magic are introduced, and the physical forms of familiars are expanded upon.  I wrote a version of the magic wand spell for this issue as well.  As far as I can tell, this issue marks the first third party publisher spells for DCC – a second first for Crawl! with the three patron spells and magic wand. 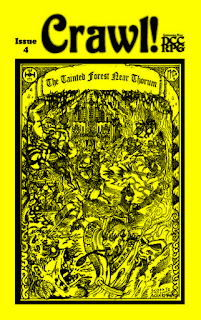 Issue #4:  The entire issue is taken over by Yves Larochelle’s module, The Tainted Forest Near Thorum, a level 5 adventure.  The issue cover is detachable, with a map of the Village of Thorum and its environs on the inside.  The adventure itself is very sandbox-y, with a lot of people to interact with, interesting monsters to fight, and an interesting overarching story that ties in well with the dangerous nature of supernatural forces in a DCC milieu.  The adventure location invites expanding upon, and Thorum could easily be used for lower-level adventures in the days before the Forest becomes Tainted.  Finally, unless I am somehow mistaken here, Hargn the River Dragon is not only the first dragon in a published third-party DCC product, but it is also the first dragon in a DCC adventure!

(There is a “snapdragon” in Purple Sorcerer’s Ooze Pits of Jonas Gralk, but I do not think that counts as an actual dragon!)

The Crawl! website says, “Crawl! is created to support the DCC RPG and its community of players and judges.  This also includes publishers and developers that support DCC RPG.”  That is a great sentiment, and one I can easily get behind.  It does leave an open question, though:  Is any part of Crawl! open content under the OGL, or similarly usable?

As I was looking through each issue to write this blog post, I began to realize just how much stuff here should be used in published adventures.  As far as I know, the official stance of Crawl! is that submissions continue to be owned by their creators,  so one should presumably contact the creators for permission.  A listing on the Crawl! page of what is allowable would be helpful; I officially offer my version of magic wand to be included on a list of Crawl! open gaming content. 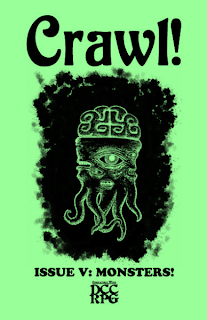 In any event, this is a really good deal.  If you play DCC, but have not subscribed to Crawl! yet, you are really missing out.

EDIT:  Crawl #5 arrived last night.  Not sure what time my mail carrier is getting here these days, as it was not in the mailbox at 5 pm when I checked!  In any event, here is another first - the first new class for DCC!  Once again, an issue filled with very cool stuff.  Fung-eyes (inspired by Jim Henson's Labyrinth?) for the win!
Posted by ravencrowking at 19:43