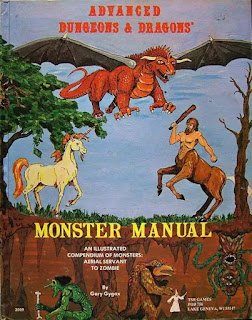 Wait? What’s that? A picture of the Monster Manual?

It’s true. In order to do a good conversion of the Lamia Noble, it is necessary to lay the groundwork with the Lamia, and that isn’t included in the Fiend Folio. I have already posted a more mythic Lamia, and it seems to me that the Lamia Noble was an attempt to include some of these traits. Eventually, I will have to create a version of the Lamia that is more in keeping with Clark Ashton Smith’s vision – an un-dead demonic seductress which gives her victims unendurable pleasure while consuming their flesh.

There are only three monsters starting with “L” in the Fiend Folio. I had originally planned to do all three as a single post. With some consideration, I decided to stick to that plan even after adding the original Lamia.

Lava Children are unusual in that their entry is written in the plural, rather than the singular. I have kept that usage here, except for when writing the statblock. It is easy to dismiss the Lava Children, with their Alfred E. Neuman-like visages. In fact, to this day I have never used them. Hopefully, the act of statting them out will give me reason to do so.

Finally, the Lizard King is yet another variety of lizard man from the Fiend Folio. Personally, I think that this was a sort-of tribute to Jim Morrison, but I could easily be wrong. I also tend to think that the trident came from a Jeff Dee illustration in the original Rogues Gallery (1980), but, again, I could be wrong.

As with the previous post, if you are enjoying these conversions, and feel like tipping, please consider supporting my Patreon, and if you use any of these creatures, I would love to hear about it. 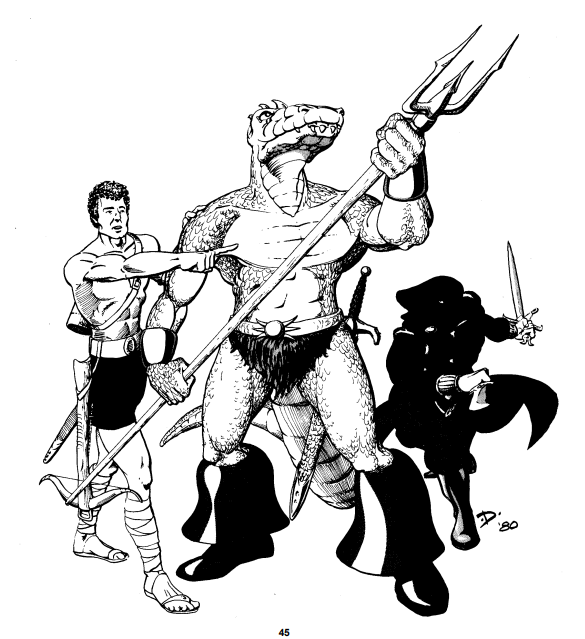 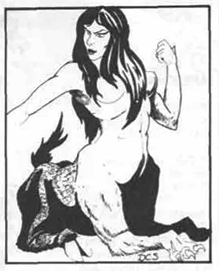 Lamias prefer to dwell in deserts — in ruined cities, caves, or the like. Their upper torso, arms, and head resemble a human female, while their lower body is that of a beast. They are able to cast spells like a wizard, and typically use these to lure victims to them. The lamia’s touch (in combat or otherwise) drains 1d3 Personality (Will DC 15 to negate; 1 point is permanent on a natural 1). If a victim’s Personality falls to 3 or lower, they willingly do whatever the lamia tells them to do.

Lamias first drain their prey of blood and then feast upon their flesh. 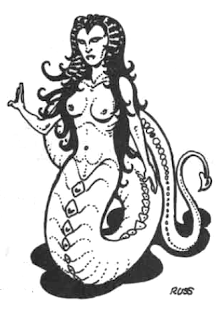 These beings rule over other lamias and the wild, lonely areas they inhabit. The lower body of a lamia noble is that of a giant serpent and the upper body can be either male or female. However, they can take human form at will, a disguise that can only be penetrated by an intentional DC 15 Intelligence check. In this guise, they attempt to penetrate human society to wreak acts of evil.

Lamia nobles are given to outbursts of senseless violence, regardless of the form they take. 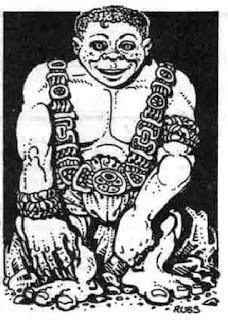 These creatures are the unnatural offspring of spirits of earth and fire. They appear as broadly-built humanoids with a curious child-like appearance, pinkish-white skin, and permanent smiles on their faces. They fight with their clawed hands and a surprisingly powerful bite.

They are peculiarly “immune” to metal. Metal simply does not exist for lava children. Any metal object can pass through them without harming them and they can move through metal without hindrance, exactly as if it were not there. Likewise, the AC value of any metal worn by their targets is ignored when they attack. Of course, this also means that a metal bridge will not support them – in all cases, it is as though the metal objects do not exist.

Lava children live underground or in volcanic regions. It is said that they are ruled by more powerful examples of their kind – some perhaps even with earth- and fire-based spells – but the truth of these rumors is left to the judge to determine. 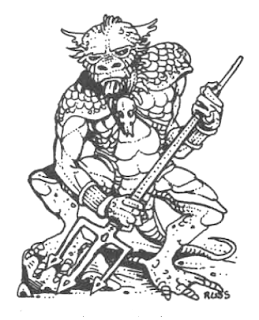 These relatives of lizardmen (see page 420 of the core rulebook) are taller, more intelligent, and more human-like. They dwell in similar damp areas, although they prefer subterranean areas near an underground river or lake. They are particularly attuned to tridents as weapons, and have an enhanced critical range when using them (Table III/1d10).

Sages have pondered whether lizard kings are occasionally born as a mutation of the more common lizardman, or whether they are a completely separate species that parasitizes lizardman communities. In either event, getting rid of the lizard king returns the lizardmen which served it back to their normal (still dangerous, but not as aggressively so) behavior. 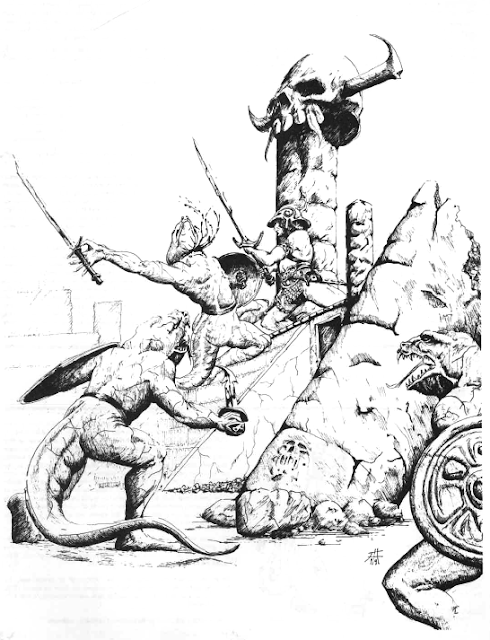