The Greatest Lizard People of Them All! 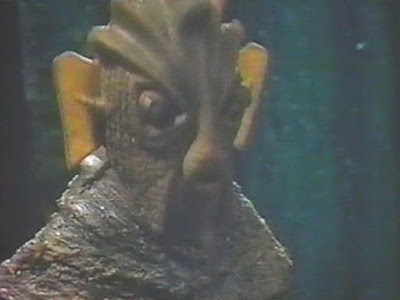 Statting out these lesser creatures is, of course, nothing more than preparation for statting out the greatest group of reptile folk that science fiction has ever known. In 1970, the Silurians appeared for the first time on Doctor Who. They would appear again in Warriors of the Deep in 1984, and in the new Doctor Who series over the course of a number of stories, beginning with the two part The Hungry Earth and Cold Blood. The Silurians encountered in these stories represent three distinct species, with different abilities.

In addition to that, 1972 gave us the first appearance of the aquatic Sea Devils, close relatives of the land-based Silurians. The Sea Devils would appear again in Warriors of the Deep, which was, at the time of this writing, their final appearance in televised Doctor Who. 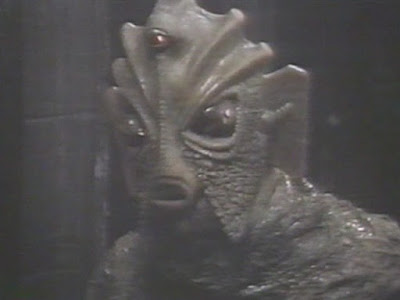 Type I Silurians appear in Doctor Who and the Silurians. They are bipedal reptiles with three eyes. They are intelligent, having been able to create hibernation pods which allowed them to survive millions of years as well as a deadly plague. Although slow and clumsy, they are strong, and have a third eye which allows them to communicate telepathically, dominate weaker minds, and make psionic attacks. The third eye could also be used to activate and deactivate  Silurian technologies, such as force fields.

Domination: Treat as a charm person spell cast using 1d16+3 for the spell check. There is no chance for corruption, misfire, or patron taint. Silurians can dominate reptiles with animal-level intelligence or less without a check.

(Extended media has suggested that Type I Silurians are merely a "scholar caste", but this seems unlikely to me.) 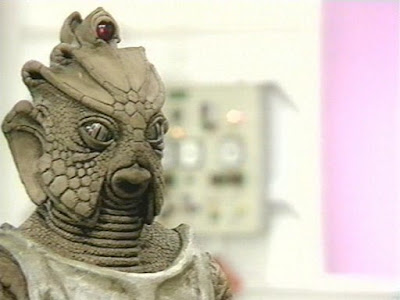 Seen only in Warriors of the Deep, where they had made an alliance with the Sea Devils, Type II Silurians lack the ability to make psionic attacks. Their ability to dominate only applies to reptiles of animal intelligence or lower. They are otherwise quite similar to Type I Silurians, except that they are quicker and better armored.

It should be noted that Type I and II Silurians, as well as Sea Devils, show no mammalian traits whatsoever, and we cannot assume that any character we see is male or female. This is not true for other reptilian species in the Doctor Who universe that have appeared on-screen. Type III Silurians, Ice Warriors, and Draconians have all showed semi-mammalian sexual dimorphism. 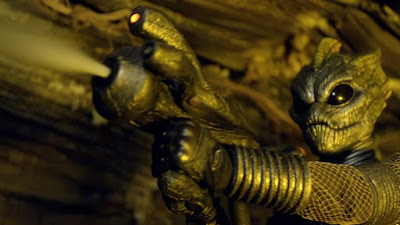 With new series Doctor Who two-part story, The Hungry Earth and Cold Blood, we were introduced to a third type of Silurian. This one was well armed and armored, fast, and was clearly semi-mammalian in its biology (at least in terms of sexual dimorphism).

After their initial story, these Silurians appeared tangentially in stories like Dinosaurs on a Spaceship, The Pandorica Opens, A Good Man Goes to War, and others. Eventually, we would see multiple appearances by Madame Vastra, who was rescued by the Doctor when work on the London Underground disturbed her hibernation with tragic results.

These Silurians have a prehensile tongue which can strike targets up to 20' away. They have venom sacks which they can choose to use with their tongue attack (but do not have to).

The first venom requires a DC 15 Fort save to avoid falling unconscious for 1d6 minutes. Even success on this save leaves a human-sized target stunned and unable to act for 1 round. At the judge's discretion, large creatures may or may not be affected.

The second venom is mutagenic in humans. Anyone struck must succeed in a DC 20 Reflex save to avoid being poisoned. Failure causes 1d3 points of temporary Stamina damage. Every hour thereafter, the victim must succeed in a DC 10 Fort save or take additional temporary Stamina damage: 1d4 on the first failed save, 1d5 on the second, 1d6 on the third, and so on up the dice chain. Although this Stamina damage heals normally, without some form of treatment the victim will die. 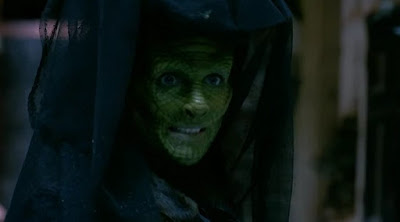 (Madame Vastra's wife, Jenny Flint, is a 3rd level Thief. The third member of the Paternoster Gang, Strax, is a Sontaran. Providing statistics for them is beyond the scope of this blog post.) 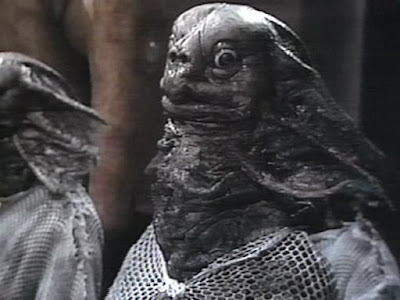 The classic serials The Sea Devils and Warriors of the Deep provided Doctor Who fans with their only glimpses of these aquatic cousins of the Silurians. Like the Silurians, they are masters of technology, including genetic engineering and sonic weaponry.  Although Sea Devils are not fully amphibious - they are air-breathers, like sea turtles - they are able to function underwater without breathing for hours. Armored Sea Devils gain a +2 bonus to AC and a -5' penalty to their movement speed (-10' when swimming).
Sea Devil: Init +0; Atk claw +0 melee (1d3) or sonic weapon +4 ranged (2d6); AC 12 or 14; HD 1d6+2; MV 25’ (or 20') or swim 40' (or 30'); Act 1d20; SP semi-aquatic; SV Fort +2, Ref +0, Will +3; AL L.
Myrka 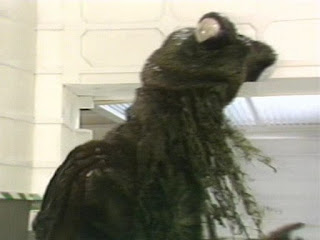 Warriors of the Deep also introduced the Myrka, a hexapodal sea creature that had been genetically engineered by the Silurians and/or Sea Devils. It had two semi-manipulative arms, four legs, and a long tail. Although clumsy, and frankly silly-looking, on land, it was very graceful in the water.

The Myrka's thick hide allows it to ignore the first 5 points of damage from any source. In addition, it can generate electrical attacks that can strike targets in either a cone 30' long with a 30' base, or in a 30' radius completely around the creature. This attack does 2d6 damage (or 3d6 damage if wearing metal armor); Fort DC 15 for half. It is only able to use this attack with a 1 in 5 chance each round.

The Myrka has only animal-level intelligence, making it easily dominated by Type I or II Silurians. 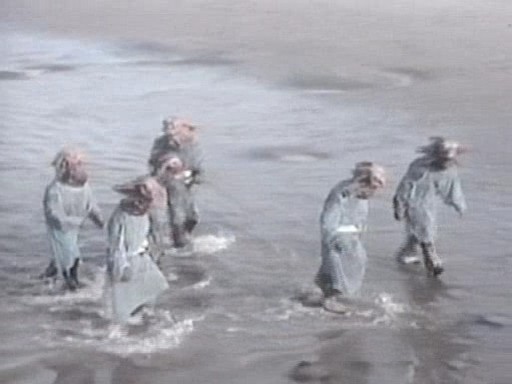 Fully appropriate for both your DCC and MCC games!
Posted by ravencrowking at 23:09