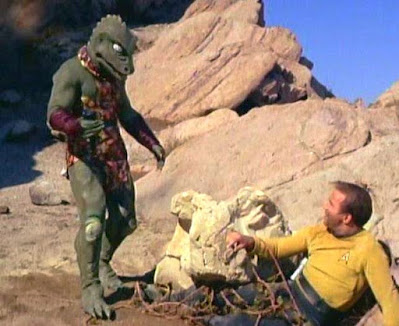 Many fantasy worlds offer their characters the chance to meet lizard people. In most cases, these lizard people are primitives. literally dominated by their reptile brains.

The Gorn, which appeared in the Star Trek original series episode Arena, were different. They were intelligent, ruthless, and every bit as capable as the average Starship captain in the Federation. Seeing past his own prejudices based on the Gorn's reptilian nature - seeing the Gorn as a person - is what allowed Captain James T. Kirk to not only survive his encounter with a Gorn captain, but impress the Metrons with humanity's potential.

(Compare with the short story, Arena, by Frederic Brown, and discussed on the Sanctum Secorum podcast here.)

Without further ado, here are Gorn for your DCC and MCC games!

Hug: If an unarmed Gorn strikes a successful blow, it gains a free and immediate attack with its other arm. If both blows succeed, the Gorn has grappled its opponent in a hug, and can do an automatic 2d4+6 damage each round until the opponent succeeds in an opposed Strength check or disorients the Gorn with a successful Mighty Deed of 4+. The classic version of this Deed is to slam one's hands on either side of the Gorn's skull, where the ears would be on a human.