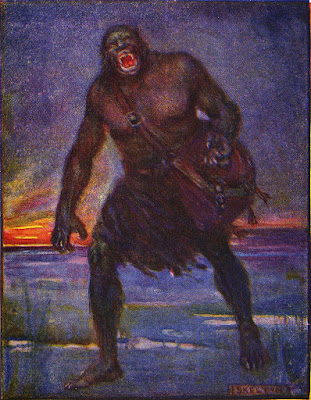 In the epic poem Beowulf, the monster Grendel and his unnamed mother are prominent. Details about these monsters are scanty. Although Grendel appears in The Nexus of Yule, the second adventure in Perils of the Cinder Claws, this is just one interpretation of the monster. Being Father's Day, I thought I might take a stab at creating a version of "Grendel's Father" that fits both with the epic poem, and which could be used in a Dungeon Crawl Classics game.

Angar, son of Ormgeld, is a descendent of the Biblical Cain, Nigh-immortal, save for injury, he is the father of not only Grendel, but many other quasi-humanoid, quasi-giant monsters. Grendel is the child of his dalliance with a fallen Valkyrie of the Warrior Horde of the Einherjar. Like Grendel, Angar is a "creature of darkness, exiled from happiness and accursed of God, the destroyer and devourer of our human kind". Unlike Grendel, Angar gains no joy from culling the unworthy from the ranks of living warriors; Grendel gets that aspect from his mother. Angar wanders the world, siring new monsters and seeking the grace of a death he has long been denied. Although death-seeking, the son of Ormgeld is not suicidal, and will use all of his might and cunning to bring his foes low. If he is eventually slain, though, it is with a smile. The Father of Grendel laughs with joy upon receiving the death-blow.