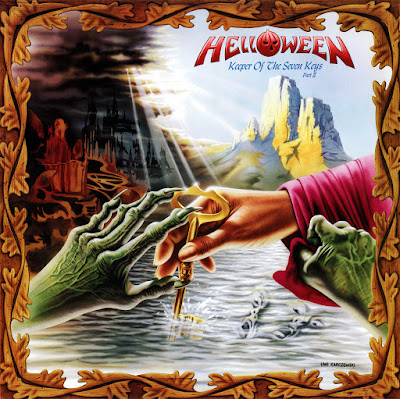 But time marches on, even for the Wizard of the Red Robe, and not all of his endeavors have been successes. It was on the World of the Maze That Lies Hidden in Shadow, where the Wizard of the Red Robe sought to unlock the Sea of Kai-Weikath that the Wizard lost, for a time, one of the Seven Keys. It was stolen by a shadow-goblin, who fled into the Maze That Lies Hidden in Shadow. This was in a World thought closed to the shadow-goblins; how the creature arrived there, and how it intends to return to the Halloween World, remain unknown. Some legends tell of an oaken-leafed portal hidden within that World which would allow such passage. Perhaps that is what the shadow-goblin used, and intends to use yet again?

Defeated, but not slain, the Wizard of the Red Robe used the planar step spell to move back to a previous world, one where time ran much faster than that on the World of the Maze That Lies Hidden in Shadow. There the Wizard sought to recruit a company willing to venture into that Maze and recover the lost Key.

What happened next? You will have to tell me, when these events play out at your table. Perhaps the shadow-goblin escapes with the Key, and the Corruptor is finally released. Perhaps it will be as the now-blind seer of visions prophesied, and your PCs will restore the Key to the Wizard, that it may be hidden from the demons of the Halloween World. Or perhaps many worlds will instead become thrall to the throne of the evil Corruptor.

To make the best use of this material, see also this blog post.

The Maze That Lies Hidden in Shadow

A vast cloud lies over the Maze That Lies Hidden in Shadow, so that down within its twisting walls there is very little light. The Maze itself is a combination of natural canyons carved by super-heated magma, the work of humanoid slaves, and the divine will of Thurkiske, the god of thunder who rules the land beneath the cloud’s dark shadow.

The dogs of war

These creatures are humanoids beholden to Thuriske, who roam the Mazelands, searching for battle and sacrifices to bloody his altars. These creatures usually travel in packs of 3d5, wolf-headed humanoids with burning red eyes, armed with spear and wearing chainmail. These may be considered the least dangerous creatures intruders in the Maze may encounters.

These beings are man-like in form, but they creep on all fours like great pale lizards.  They are capable of clinging onto any surface, even ceilings, without difficulty. They attack by lashing with grey tongues, which are able to stretch out to 30’ away. The saliva coating these members causes hallucinations and waking nightmares, reducing the effectiveness of creatures exposed. Each exposure requires a DC 15 Will save, or the target takes a -1d penalty on the dice chain to all rolls for the next 1d6 x 10 minutes (treat as a poison). A target who fails three saves becomes catatonic for 1d5 hours while the narcotic saliva causes terrifying nightmares.

Running through the Maze That Lies Hidden in Shadow is the black river called Evil. Coming within sight of the Evil requires a DC 5 Will save. This save rises to DC 10 if the water is touched, DC 15 if one is submerged (or mostly submerged) in the black water, and DC 25 if any of the water is consumed. Failure means that the victim is thoroughly subsumed by hate, and must attack the nearest creature to the best of the victim’s ability for a number of rounds equal to the amount by which the save was failed, +1d6 rounds.

Each time one of these circumstances recurs, the save must be made again. Thus, if the PCs leave the Evil behind, but come within sight of it again, new saves must be rolled. Creatures native to the Maze appear to be immune to this effect; in reality, they have already succumbed to hatred.

The Man in Black

The purported Master of the Maze and High Priest of Thuriske, the Man in Black wears a black hooded cloak over Victorian evening-wear – black coat and slacks, white cuffs, shirt, and handkerchief. No one can describe the Man’s face. If you are not looking at him directly, what he himself looks like is impossible to remember.

The Man in Black seeks to bring despair to those he encounters, driving them mad, bringing them to drink, overconfidence, and ruin. He can offer many things (depending upon the imagination of the judge), but none of them are truly what they seem to be. Most commonly, he offers a black liquor that can grant a temporary 1d3 bonus to any particular stat, or a one-time +1d5 bonus to any given check. This drink is addictive, and after 1d12 hours, unless another dose is taken, not only does the bonus no longer apply, but the character must succeed in a DC 20 Fort save or take an equal penalty until another dose is consumed. In the case of a skill increase, the penalty applies to all skill checks – including spell checks, if that is how the liquor was used.

After a character has failed three saves, the liquor never gives bonuses again; it is needed simply to offset penalties. At this point, the Man in Black begins to demand evil deeds performed in exchange for his wares. If reduced to 0 hp, restrained, or if he takes a critical hit whose result would be lethal, the Man in Black simply fades away. He is impossible to kill.

The Man in Black’s touch attacks are a seemingly effortless martial arts. Likewise, his high AC reflects an ability to simply and easily step out of the way of an attack.

Will 'o' the wisps

These corpse-candles appear as red, green, yellow, or blue lights. They seem to misguide the paths of those who wander in the Mazelands. Each has the power to entice victims into following it; a DC 15 Will save (+1 for each additional will ‘o’ the wisp beyond the first) is required to resist following the corpse lights for 1d3 turns. Their destination is (roll 1d7): (1-2) a group of dogs of war, (3) a creeping nightmare, (4-6) the river Evil, or (7) the Man in Black. When leading others, they do not move faster than is needed to keep ahead.

Will ‘o’ the wisps can defend themselves with energy discharges, up to a range of 30’. They can become invisible or visible at will by using an Action Die. Finally, a will ‘o’ the wisp can exude despair once per day, to a range of 60’. Any creature caught in this radius must succeed in a DC 20 Will save or become overwhelmed with despondency, taking no actions for 1d3 turns unless directly attacked.

The Key that the Wizard of the Red Robes lost in this world is said to be the Key to Heaven or the Key to the Mind, which is perhaps the same Key. When it touched the Sea of Kai-Weikath, it released the watery spirits of the dead which were locked therein. These were the ghosts of sailors drowned in that Sea, whose spirits were thereafter corrupted where the river Evil pours into the Kai-Weikath.

The spirits have no power to harm on their own, but their wailing and (powerless) uttered prophesies may unnerve characters that encounter them. The ghosts of the Kai-Weikath can be compelled to answer questions using a consult spirit spell.