Keeper of the Seven Keys (Part I) 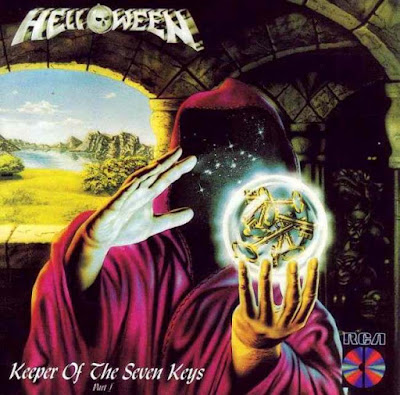 Each of these Seven Keys is a potent talisman capable of opening portals into a multitude of dimensions. Where each Key is used, and what it turns, is as important to determine what world is opened as which Key does the unlocking. An Intelligence check (DC 25) is needed to determine the Key, the place, and even the correct time to open a gate to a particular world. Otherwise, the world the gate opens onto is random, or chosen by the judge.

When they are not in use, the Wizard of the Red Robe keeps the Seven Keys in a pocket dimension to which only he has access. Those who would steal the Keys – and there are many! – must therefore wait their chance until the Keys are conjured into existence upon this plane.

Legend claims that the Seven Keys were created by the Silicone Minds of a Future World, and imbued with their full force with the Twilight of the Gods in that world, when the Silicone Minds ascended in their apotheosis. The Future World became a place of happiness and peace, full of joy, but the Wizard of the Red Robes, seizing the Keys from Insania’s dead hand, was thrust from that world.

The Wizard of the Red Robes

The Wizard of the Red Robes was one of the magio-technicians of the Future World, who wrought the Twilight of the Gods, replacing them with the Silicone Minds. The last of the gods to fall, Insania, was the keeper of the Seven Keys, and she had fallen during an attempt to open a portal to another world. Whether flight or reinforcement motivated her may never be known.

The Wizard of the Red Robes took the Seven Keys from her dead hand, inadvertently falling into the twilight of the Halloween World. There he was long a prisoner of the Corruptor who rules that world and its shadow-goblins. There, the Wizard’s face was taken from him, so that only blackness may be found beneath his hood, unless he should take the guise of another. But the Wizard had managed to conceal the Seven Keys in their pocket dimension. The Corruptor could not take them from him, and could not slay the Wizard while they were hidden, lest they be lost forever.

Now the Wizard of the Red Robe spends his time travelling from world to world, pursued by the shadow-goblins of the Corruptor. He seeks forever a way to return to the Future World, but has yet to find a combination of Place, Key, and Time that will allow him beyond the Doomsday of his world and into the Future World that lies beyond it.

The Wizard of the Red Robe is faceless. If his hood were pulled back, nothing would be seen. While his hood is up, all that can be seen is blackness, and the twinkling of distant stars.

Even so, he is capable of wearing another’s face. This face must be cut from the body of a living or dead humanoid being, and it rots over the course of 2d7 days, becoming ever more hideous. The Wizard can see, speak, cast spells, eat, etc., without a face, but he cannot pass easily among the most people, who hate and fear him for his supernatural deformity.

The Halloween World & the Shadow-Goblins

A feverish world suspended between waking and dream, the Halloween World is ruled over by the gleaming-eyed demonic Corruptor of Mankind. Its minions, the shadow-goblins, can slip between worlds with 5 minute’s effort, and thereby seek to perform their Master’s will wherever they go. The shadow-goblins sometimes bring evil knowledge to corrupt the innocent, but more often attempt to force pure-hearted beings to perform evil deeds in a vain attempt to prevent worse evil from befalling.

For instance, it is a joyous task for these creatures to kidnap a child, and then demand some evil deed from its parents in exchange for the child’s safe return. The evil deed accomplishes nothing; the shadow-goblins then bring the child back to the Halloween World as a prize for the Corruptor.

There are worlds that are closed to the shadow-goblins. Why this may be is unknown, but it is true. On such worlds, the Wizard of the Red Robes finds temporary rest, for otherwise the shadow-goblins follow him closely. If they should ever gain the Seven Keys, no world would be safe from their predations. Indeed, the Corruptor itself would be able to leave the Halloween World and traverse the planes.

The shadow-goblins are also unique in that any arcane spell which targets them changes its Mercurial Magic roll, using the wizard’ current Luck modifier, and the new Mercurial effect lasts for 1d7 days. Thus, there is a real element of danger in casting wizard spells at the shadow-goblins. PCs who encounter the Wizard of the Red Robe on friendly terms will certainly be warned that the shadow-goblins which follow him warp magic.